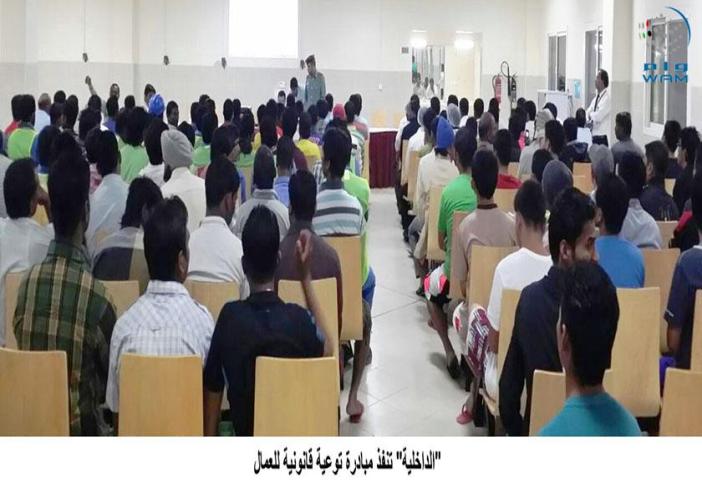 Abu Dhabi, 29th May, 2015 (WAM) - The Law Respect Culture Bureau at the General Secretariat of the Office of H.H Deputy Prime Minister and Minister of Interior, recently implemented a legal awareness initiative for workers at the various workers' villages in Abu Dhabi, Al Ain, the Western Region, and Fujairah.

Captain Hamdan Al Hafiti, Chief of the Community Education Section at the Law Respect Culture Bureau, indicated that the initiative focused on shedding the light on the legal procedures and engaging the largest number of workers in the various awareness and education programs. "Such an endeavor would boost workers’ knowledge of the provisions of the laws and regulations in force in the UAE, in a way that would positively reflect on their behavior and support the efforts exerted to enhance security," he added.

Moreover, Captain Al Hafiti noted that the office has organized 8 awareness lectures for workers in Yas Island, Abu Dhabi and the emirate of Fujairah. The lectures focused on workers’ legal rights and obligations as stipulated by the laws and regulations enacted in the country. He said: "The laws and regulations applicable in the UAE have been enacted to organize and regulate the rights and duties of all individuals. They stipulate the ‘do’s and don’ts’ for workers in order to stay within the boundaries of the law and protect themselves and their society as well."