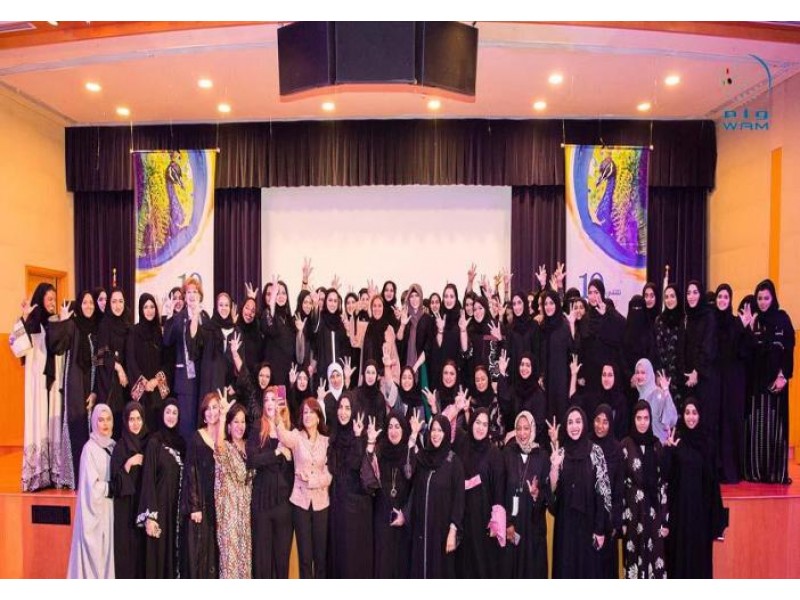 This came during the third annual alumni reunion, which was organised by the Office of Alumni Affairs at Zayed University in collaboration with the Dubai International Writers’ Centre (DIWC) to celebrate the outstanding achievements and legacy of its graduates, marking the 10-year anniversary since their graduation in 2005.

The Ceremony started with the UAE national anthem, followed by a short video recognising the outstanding work and professional accomplishments done by Zayed University alumni following graduation, and a keynote speech by Sheikha Lubna, who confirmed that under the UAE wise leadership and clear vision, our nation will continue to prosper and develop.

During her address, Sheikha Lubna pointed out that every step "we take forward is a step toward achieving something bigger and better and a step toward higher goals and accomplishments. As we take steps, future steps become clear and we, daughters of Sheikh Zayed, become effective and influential leaders, who contribute to the national development process and secure UAE’s position among other civilized nations."

"The UAE’s position elevates everyday on both regional and international levels thanks to the wise vision of President His Highness Sheikh Khalifa bin Zayed Al Nahyan and dynamic, effective and successful polices and strategies that have strengthened its presence. Not only that, but also surprised the world with its massive development, which helped it attain prominence among the world’s most advanced nations," she added.

In her welcoming remarks, she said, "For the first time, the world hears about a government that enacts a national charter for happiness and positivity. A government that promises to create an appropriate environment for the happiness of individuals, families and the community with positivity an essential value in achieving dreams."

"For the first time, the world hears about a ministry of tolerance that reflects tolerance, inclusion and benevolence values, which are integral to all of us. The UAE sets a shining model for promoting openness, acceptance and tolerance all over the world and upholds the value of moderate nation, based on the principles of wisdom, ethics and peaceful approach," Sheikha Lubna added.

Sheikha Lubna has also highlighted the UAE government’s critical commitment to empowering Emirati women and providing them with equal opportunities.

"The status of women within the UAE has flourished in parallel with the country’s growth. It is evident across the UAE that women today constitute a vital part of the nation’s workforce and actively contribute to the country’s government and economy. Emirati women hold important portfolios in the Federal Cabinet. They have become ministers and joined the federal government in the biggest reshuffle in its history," she added.

Sheikha Lubna concluded her speech saying, "Zayed University is proud to have a strong alumni network. Zayed University succeeded in keeping close contact with its alumni, and continuing to recognise them for their excellence and outstanding achievements is one of the most surefire ways to both cultivate their community and motivate them for success and distinction."

The alumni gathering has also seen the presence of Hend Saeed, Project Manager at DIWC, who gave a presentation on the Centre’s diverse programmes and activities that bring together people of various backgrounds, cultures and interests to interact with each other.

"The Centre is also an international hub for writers, providing a space for visiting writers and writers-in-residence to impart knowledge and expertise to locally-based writers and users of the Centre," Hend said.

During her speech, Hend also pointed out to the newly-launched programme ‘Mother and Toddler Reading Group’.

"The latest new initiative will focus on Emirati mothers and their pre-school children. The weekly session will be run entirely by Emirati Reading Ambassadors who have undergone a course at the Centre given by a specialist in Arabic and Early Learning. Our Reading Ambassadors have been trained in the latest methods of how to communicate with children and how to use new educational techniques that will prompt a love of reading, creativity, learning and most of all, a love of the Arabic language," she added.

The alumni gathering concluded with recognising and honouring 126 graduates, the fourth batch graduated from Zayed University.