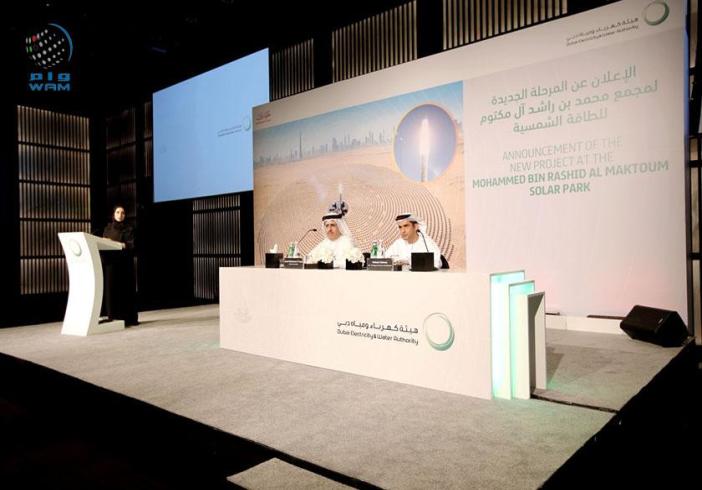 DUBAI, 2nd June 2016 (WAM) --- The largest Concentrated Solar Power (CPS) project to be built on a single site in the world will begin power generation in Dubai within the next five years, officials announced on Thursday.

The long view is that the new CPS site will generate 1,000 megawatts (MW) of power by 2030 as part of the Dubai Clean Energy Strategy to generate 75 per cent of Dubai’s power from clean energy by 2050.

Concentrated solar power is generated by circular rings of solar mirrors called heliostats that direct sunlight into a central collection tower where the sun’s rays power a steam turbine to generate electricity.

The project will surpass the existing world’s largest CPS tower in Morocco that has a power generating capacity of 150MW, senior energy officials said.

The new CPS project, Al Tayer said, will deliver inexpensive power at less than 8 US cents per kilowatt hour as it is generated from the site to be located at the existing Mohammad Bin Rashid Al Maktoum Solar Park.

The solar project and solar park when completed is expected to slash carbon emissions in Dubai by more than 6.5 million tonnes of harmful CO2, helping Dubai and the UAE meets its commitment to the Paris Agreement to keep global warming temperature increases below 2 degrees Celsius this century.

Al Tayer said that Dewa has issued a call for tenders inviting international solar consultants to submit proposals on the first 200MW phase of the project.