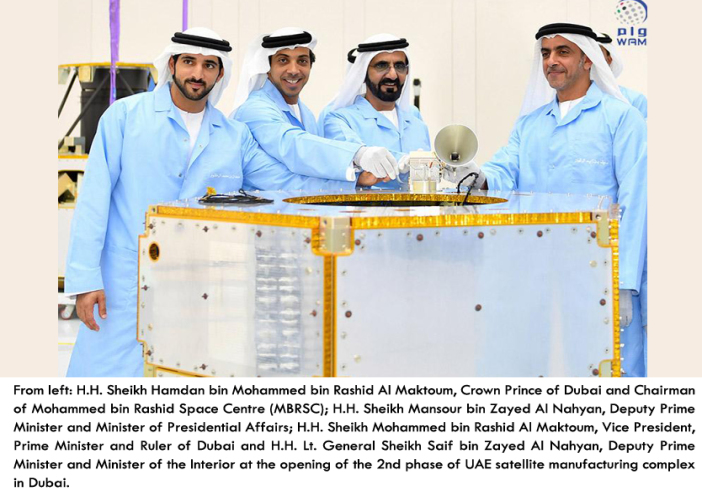 The project will send an unmanned probe to Mars by 2021 marking the UAE’s 50th National Day.

His Highness Sheikh Mohammed bin Rashid gave the green light to start manufacturing the probe’s prototypes, the Arab world’s first Mars probe. The project place the UAE with the nine countries that aim to explore Mars.

"The UAE’s ambition is to explore outer space. We are investing in our national cadres to lead this project and contribute in expanding our knowledge about Mars. The Hope Probe is a qualitative leap for UAE’s scientific efforts, it the first contribution for the Arab world in this regard," said His Highness Sheikh Mohammed.

Sheikh Mohammed’s remarks came during his visit to the Mohammed bin Rashid Space Centre (MBRSC) to opens the 2nd phase of the UAE satellite manufacturing and assembling complex, a multitasking facility capable of handling several space projects at a time.

Signalling the beginning of manufacturing process, Sheikh Mohammed installed the first part of KhalifaSat, the first Arab satellite which is being built purely by Emirati engineering and expertise in the UAE. KhalifaSat is set to launch in 2018.

Upon his arrival, Sheikh Mohammed was welcomed by Chairman of Board of Directors of the Telecommunications Regulatory Authority (TRA) Mohamad Ahmad Al Qemzi, MBRSC Board Chairman Hamad Obaid Al Mansouri, and MBRSC Director-General Yousif Al Shibani, in addition to MBRSC’s senior executives and project managers.

Expressing his pride at seeing the first UAE satellite being built by Emirati engineers, His Highness said, "The UAE today has the full capacity to manufacture and build satellites with any foreign technical support. We are planning to become a leading regional hub for space industries and we will continue developing the Emirati workforce highly specialised in space technologies."

The Hope Probe that was launched in 2015 will leave Earth in 2020 travelling more than 60 million kilometres in nine months and will be launched to coincide with the UAE’s 50th anniversary.

During the visit, Sheikh Mohammed also inaugurated a house that is fully powered by solar energy with the same solar technology used space industries. The house is built with smart engineering solutions that fit the hot and humid climates. The technologies includes water cooling systems, heat and air insulations, air filtration and ventilation systems and smart operation system. The house is made of treated wood without any steel elements.

The MBRSC launched this project as part of its research efforts in sustainability and green buildings. The house uses energy production and storing technologies similar to the technologies used in building satellites and space shuttles.