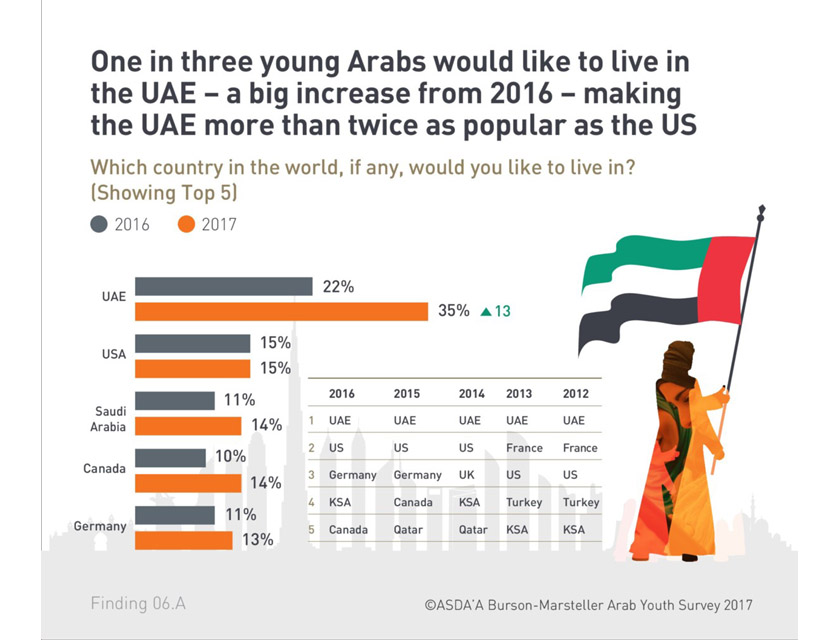 DUBAI, 3rd May, 2017 (WAM) -- The UAE has once again topped the world's countries most young Arabs wish to live in, according to a recent international survey.

With a significant increase in the nation's popularity compared to previous years, the findings of the ninth annual ASDA'A Burson-Marsteller Arab Youth Survey 2017, have kept the UAE for the sixth year on a row at the pinnacle of choices for young Arabs to live in, with 35 percent of young Arabs surveyed, citing the UAE as their first and foremost preference, a significant increase of 13 percent points over last year.

In another credit to the much-coveted living standard of the country, the UAE again topped other world nations when 36 percent of young Arabs said the UAE is their model country, when asked about which state they would like their country to emulate, compared to 23 percent last year. The US came in second place, with 15 percent, Saudi Arabia and Canada with 14 percent, and Germany on the fifth position with 13 percent.

Looking at the geopolitical situation, a third of young Arab surveyed across 16 countries said the UAE and Saudi Arabia are the top allies of their country, with 36 percent of them putting the UAE slightly ahead of Saudi Arabia, 34 percent, an increase of 8 percentage points from 2016.

Sunil John, Founder & CEO of ASDA'A Burson-Marsteller, said that the survey has consistently reported the UAE as the most desired place for young Arabs to live in and to emulate.

This is a testament to the success of the nation's model of economic diversification and its focus on creating job opportunities and driving the entrepreneurial skills of young people. Young Arabs see the UAE as a beacon of hope and by endorsing its development model, they are applauding the vision of the country's wise leadership, he noted.