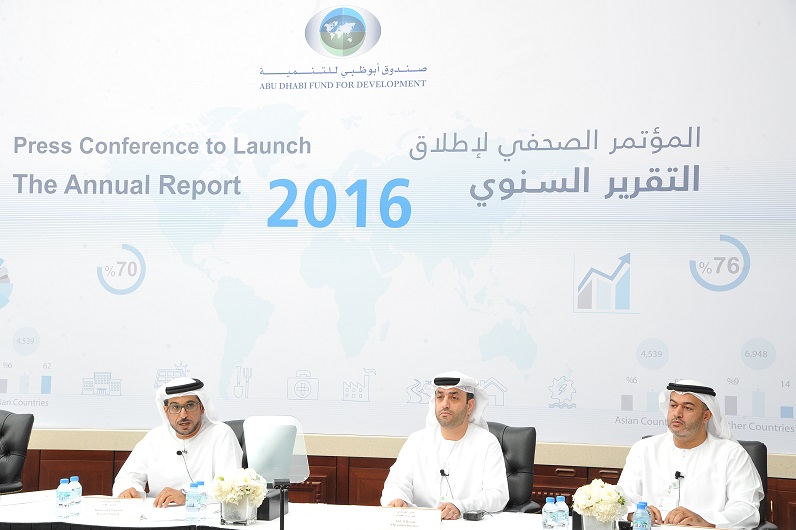 Headlining a press conference at the ADFD headquarters to announce the annual results for 2016, Mohammed Saif Al Suwaidi, Director-General of ADFD, said, "From its inception in 1971 till the end of 2016, ADFD’s total development funding and investment portfolio registered AED80 billion, with the number of beneficiary countries reaching 83."

In contrast, ADFD’s development funding in 2015 recorded AED1.9 billion, of which AED1.2 billion comprised government grants, and AED700 million was expended as concessionary loans. By the end of 2015, aggregate development funding and investments constituted AED76 billion expended across 78 countries.

"In 2016, ADFD excelled in forging new strategic partnerships with international stakeholders, most notably the International Centre for Biosaline Agriculture and the Lives and Livelihoods Fund. These synergies underpin the fund’s efforts in administering long-term development programmes and projects," he continued.

ADFD supports a variety of sectors, such as infrastructure, education, health, housing, transport, irrigation, agriculture and renewable energy, that directly improve the lives of millions of people in beneficiary countries.

A report by the Development Assistance Committee of the Organisation for Economic Co-operation and Development, OECD, named the UAE as the top world aid donor in the field of official development assistance for 2016. The country also attained the number one slot in 2013 and 2014.

Highlighting the role of ADFD and other leading national entities that played a role in this success, Al Suwaidi said, "This achievement demonstrates the commitment of the UAE leadership towards development aid and its unwavering dedication to playing an active role in achieving the United Nations’ Sustainable Development Goals. Furthermore, it testifies to the country’s success in helping people across developing countries attain their socio-economic objectives and supporting them in overcoming challenges."

By the end of 2016, ADFD channelled 76 percent of its funding to Arab countries, having financed 339 development projects valued at AED58 billion. Amounting to six percent of the total funds, Asian countries received AED4.6 billion in development finance across 66 projects. African countries were the recipients of AED3.3 billion across 74 projects, making up four per cent of the funding. 14 per cent, approximately AED10.7 million, was utilised to fund 18 projects in other geographic locations, particularly Latin America and Europe.

The fund continued to strengthen its partnerships with international financial institutions that have contributed to enhancing its leadership role in assisting beneficiary countries and supporting socio-economic development, one of which is the Asian Infrastructure Investment Bank.

January 2017 marked the completion of the fourth funding cycle of the ADFD/IRENA Project Facility that seeks to financially support the renewable energy sector to the tune of US$350 million over seven funding cycles.

To date, the facility approved US$189 million for use across 19 renewable energy developments. Currently generating about 100 megawatts of energy, the initiative’s projects have enhanced hundreds of thousands of lives.

ADFD continues to support Pacific Island countries in fulfilling their growing energy demands from renewable sources through the US$50 million UAE-Pacific Partnership Fund. 2016 witnessed the launch of operations on five projects in the Solomon Islands, the Marshall Islands, Nauru, Palau and Micronesia.