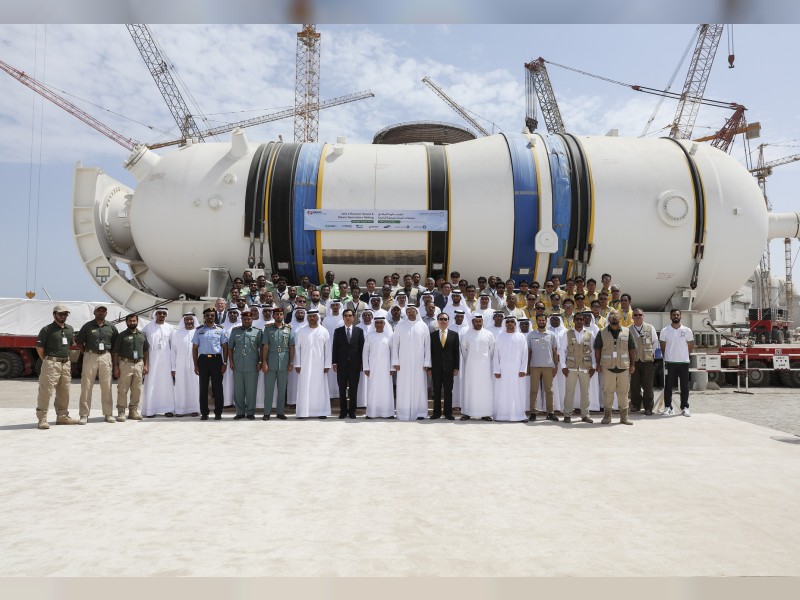 ABU DHABI, 14th August, 2017 (WAM) -- The Emirates Nuclear Energy Corporation, ENEC, has announced that significant progress has been made on the construction of the Barakah Nuclear Energy Plant, with the installation of the steam generators for Unit 4, the final unit at the plant. This milestone event coincides with the successful installation of Unit 4’s Reactor Vessel, RV.

During the event, the delegates took part in a signing ceremony as well as tour of the site, which highlighted ENEC’s focus on quality and safety during construction and nuclear operational readiness activities in preparation for the units to start generating electricity.

Speaking on the announcement, Khaldoon Al Mubarak, Chairman of the Board, said, "The UAE’s peaceful nuclear energy programme supports the Abu Dhabi Plan by contributing to a diversified energy mix and sustainable, long term economic growth. The installation of the final reactor vessel and steam generators, as per the 2009 Prime Contract, is a great achievement.

"I am proud of the unwavering commitment and professionalism demonstrated by the entire team. From our Emirati engineers to our international experts and Korean partners, the focus has remained on quality, safety and efficiency throughout this development process," Al Mubarak added.

Jassim Mohammed Buatabh Al Zaabi said, "I am proud to be to be here in Barakah today to witness this extraordinary milestone in the UAE peaceful nuclear energy programme. Nuclear energy plays a strategic role for the future of our nation, enabling economic and industrial growth, as well as careers in nuclear energy for Emirati youth. It will also give support in securing the energy sector by diversifying energy sources to meet the rapid growth of the national economy."

The delegation finalised the visit to Barakah with a signing ceremony inside Unit 4, where they observed the installation of the Steam Generators. Guests signed a specially-prepared panel to commemorate the milestone.

ENEC’s CEO, Mohamed Al Hammadi, said, "These achievements are showcasing our commitment to delivering a world-class nuclear energy programme, from construction through to operations. The successful installation of the final Reactor Vessel and Steam Generators for the Barakah Plant is testament to the dedication of our teams towards the previous milestones and for the upcoming plans."

Steam Generators play a key role in the conversion of energy generated by the nuclear fission reaction in the RV into electricity, which will eventually power homes and businesses throughout the UAE. The heat generated in the RV is transferred to the steam generator and turns water into steam, which is then used to spin a turbine and generate power.

The installation of the RV is a critical step in the continued progress and development of the UAE peaceful nuclear energy programme. The RV is one of the most important and largest components in a nuclear energy plant. Weighing over 500 tonnes and measuring almost 15 metres in height, the RV will eventually contain the controlled nuclear reaction that will generate the clean, efficient and reliable electricity that will feed into the UAE grid. It is also one of the many defence-in-depth barriers that ensure the safety of nuclear energy plants.

The project at Barakah is progressing steadily with construction of the four Units now more than 82 percent complete. All four units will deliver clean, efficient and reliable nuclear energy to the UAE grid, pending regulatory reviews and licensing. When the four reactors are completed, the Barakah Nuclear Energy Plant will save up to 21 million tons of carbon emissions each year.