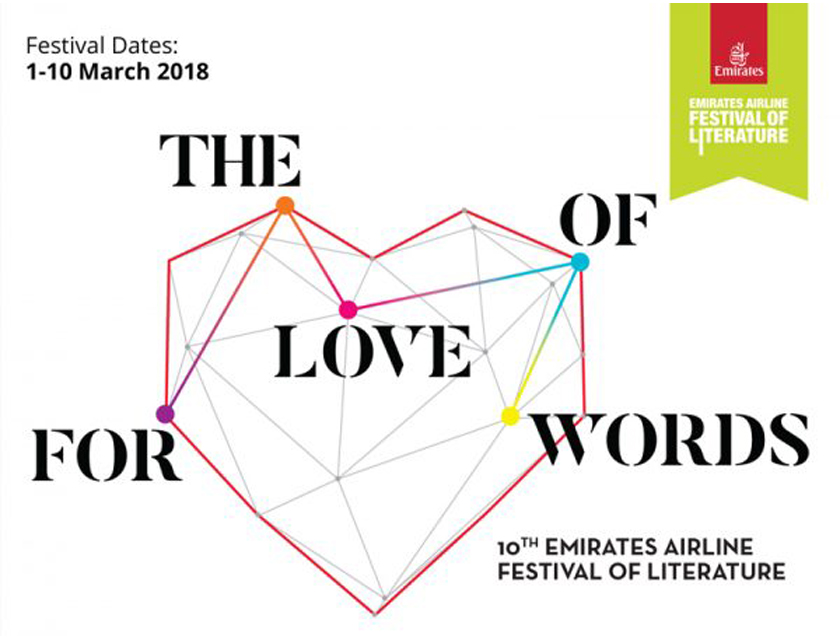 DUBAI, 23rd October, 2017 (WAM) -- The UAE’s annual celebration of the written and spoken word, the Emirates Airline Festival of Literature, has announced its strongest ever line-up for its 10th anniversary event, which takes place from the 1st to 10th March 2018.

To mark this milestone occasion, an exclusive list of 25 unmissable sessions and many award-winning authors from both the Western and the Arab World will be released.

The Emirates Airline Festival of Literature is held under the patronage of The Vice President, Prime Minister and Ruler of Dubai, His Highness Sheikh Mohammed bin Rashid Al Maktoum. The Festival is held in partnership with Emirates Airline and the Dubai Culture & Arts Authority (Dubai Culture), the Emirate’s dedicated entity for culture, arts and heritage.

Speaking at the event, Isobel Abulhoul, Director of the Emirates Airline Festival of Literature, said: ‘When we started 10 years ago, none of us could have foreseen the enormous positive impact the Festival has had on the literary scene in the region. Thanks to our patron His Highness Sheikh Mohammed Bin Rashid Al Maktoum, the Vice President and Prime Minister of the UAE and Ruler of Dubai, the Festival has been able to blaze a trail and become a Festival of international standing, attracting authors from across the globe. In our first year 65 authors attended.

''Since 2009 more than 1000 bestselling authors have visited Dubai, helping to share our passion for reading, opening the door to other worlds and building an appreciation of different genres, viewpoints and cultures. More than 20,000 students benefit through our Education Programme each year; the Festival has helped launch the international publishing careers of eight locally-based debut authors, and has received numerous awards,'' she stated.

Sheikh Majid al Mualla, Divisional Senior Vice President Commercial Operations, Centre for Emirates Airline said: ‘We are excited to celebrate 10 years of the Emirates Airline Festival of Literature, an event that has become one of the world’s leading literary gatherings for its rich diversity of authors and engaging programmes that showcase the power of the written word. As an airline, we connect people with their passions and unique interests and through vibrant events such as this Festival, we are confident that audiences of every age will continue to have the opportunity to be inspired by the conversations, thoughts and ideas – however big or small - delivered during the event. We also believe that the Emirates Airline Festival of Literature contributes to Dubai’s thriving cultural landscape, and we look forward to supporting this event to scale even greater heights.'' Saeed Al Nabouda, Acting Director General of Dubai Culture & Arts Authority, commented: ‘We at Dubai Culture are proud to support the Emirates Festival of Literature, which celebrates its 10th successful edition in March 2018. We are pleased to be working with Emirates Literature Foundation, the organiser of the Festival, to contribute to building a culture of reading across all segments of the community, especially by offering young people a unique opportunity to meet some of the world’s most famous writers. We also value the role the Festival plays in encouraging the community to think creatively, helping them to better understand the cultures of the world, positioning the UAE as an icon for tolerance and openness in the region, and promoting cultural exchange, harmony and peace among different nations.’ Al Nabouda added: ‘Dubai Culture is committed to supporting the UAE’s literature sector and platforms such as this Festival to achieve the objectives of the National Strategy for Reading 2016-2026.'' Education is at the heart of the Festival and the Education Days, Student Sessions, School Visits and Children’s Competitions last year reached 25,000 students across the country. Returning this year is the Poetry Live – GCSE Poetry Day, an amazing opportunity for students studying GCSE English to hear some of the most acclaimed British poets of today read live.

There will also be a series of sessions and masterclasses focusing on the publishing industry in the Gulf, featuring acclaimed global and regional publishers, translators and writers who will examine opportunities for publishing in the Arab world and internationally.