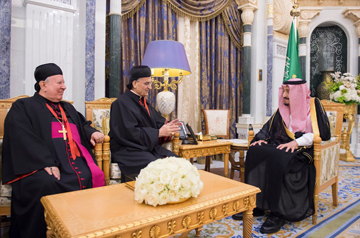 ABU DHABI, 15th November, 2017 (WAM) -- A UAE newspaper has said that Saudi Arabia is moving fast in its modernisation drive, the latest positive development being the historic visit of Lebanon’s Catholic patriarch to Riyadh where he met with the Custodian of the Two Holy Mosques, King Salman bin Abdulaziz Al Saud.

"Cardinal Mar Bechara Boutros al-Rahi is one of the most prominent Christian figures in the Middle East. While Lebanese Christian politicians often meet Saudi rulers in Riyadh, al-Rahi is the first church leader to visit the kingdom," said Gulf News in an editorial on Wednesday.

The paper continued, "The invitation comes amid a drive to modernise Saudi Arabia’s traditionally conservative society that’s being led by Crown Prince Mohammed bin Salman bin Abdulaziz, who vowed last month to eradicate extremism and return the kingdom to what he said was "moderate" Islam.

"While symbols of Christianity are banned in Saudi Arabia, al-Rahi was seen openly wearing a cross and being greeted by one of the kingdom’s most influential ministers, a leading Saudi minister, Thamer Al Sabhan.

"The photos hint at the rapid change under way in the kingdom under Crown Prince Mohammad Bin Salman. On top of his promise to revolutionise the oil-dependent Saudi economy, and reboot a traditionally cautious foreign policy, the 32-year-old also says he’ll change the religious basis of Saudi society, stamping out extremism and ushering in a "moderate" version of Islam.

"This visit also comes at an important time where Saudi Arabia is moving fast to collect allies to help combat the rapid and aggressive expansionism of Iran in the region.

"The Saudi visit of Patriarch Bechara, who has sought to establish a "sincere and complete dialogue" with Muslims, is a step towards greater cooperation between the two great faiths," added the Dubai-based daily.