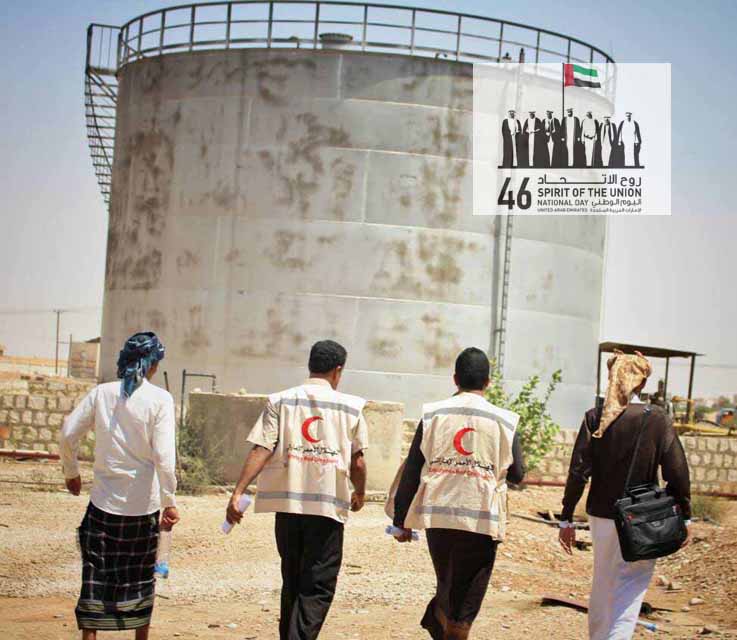 ABU DHABI, 28th November, 2017 (WAM) -- On the occasion of the UAE's 46th National Day celebrations, the Emirates News Agency, WAM, has compiled a series of reports regarding the achievements of the state over the past year. In part six, we look at the UAE aid to Yemen over the last 12 months.

Over the course of the last year, Operation Restoring Hope, the campaign by the Saudi-led Coalition to restore political legitimacy to Yemen, has continued to work to bring to an end the illegitimate authority represented by the Houthi militias and the forces supporting former President Ali Abdullah Saleh, along with their foreign backers.

At the same time, the UAE has maintained and increased its programme of providing humanitarian assistance and of facilitating reconstruction of the country’s infrastructure, all part of a programme designed to meet the needs of Yemen’s people. Latest figures indicate that the UAE ranks as the top country in the world in terms of providing relief assistance to the country.

The UAE’s contribution was acknowledged by the President of the International Committee of the Red Cross, ICRC, Peter Maurer, who commented at a recent seminar organized by the Emirates Diplomatic Academy, that, "The UAE is in the core group of donors of ICRC, and we appreciate their contributions, in particular to our Yemen operations."

The "first and foremost partner" of the ICRC in the UAE, he noted, was the Emirates Red Crescent. "We appreciate their efforts within the UAE but also internationally."

Besides its collaboration with the ICRC, the Emirates Red Crescent also worked closely with the World Health Organisation, WHO, in the fight against the epidemic of cholera which swept much of Yemen earlier in the year.

Dr. Mamunur Rahman Malik, Coordinator of the Health Security and Preparedness Cluster in WHO’s Department of Communicable Disease Control, noted at the height of the epidemic in June that, "At this point in time, the Emirates Red Crescent is our only strong partner in Yemen in fighting the cholera epidemic and other serious health issues,"

Yemenis, he said, welcomed the WHO’s partnership with the ERC because of their recognition that ERC services were made available to all without discrimination. "Our partnership has proven that we are going to solve the problem without any discrimination, targeting the neediest segments. People feel they get what they need and we need to scale this up further in order to expand our reach," he explained.

UAE support for WHO activities included a donation of US$10 million from His Highness Sheikh Mohammed bin Rashid Al Maktoum, handed over to the organisation’s Director General, Dr. Tedros Adhanom Ghebreyesus, during a meeting in July.

As the WHO’s Dr. Malik noted, however, the UAE, through the ERC, has also made a significant contribution to health and other humanitarian services in Yemen through its own programme of activities. Speaking at a time when an estimated 40-50 percent of Yemen’s health facilities were not operating, the ERC was managing routine medical services in Aden, he noted.

While full details of the cost of the UAE’s humanitarian assistance to Yemen are not currently available, well over US$2 billion has been provided since the launching of Operation Restoring Hope in 2015, both directly and through support for the programmes of international organisations.

This assistance has not only covered immediate humanitarian needs but has also extended to the rebuilding of infrastructure damaged during the course of the conflict.

Incomplete figures indicate that expenditure on humanitarian and charitable activities has exceeded AED1.97 billion ($536million). This included the supply of 172,000 tonnes of food and over 100 tonnes of medicines and other medical supplies, together with ambulances, with ERC medical teams also treating hundreds of thousands of patients.

One estimate suggests that UAE aid has reached as many as 10 million Yemenis, including four million children. Polio and measles vaccinations have been administered to around 488,000 children, including 130,000 infants under the age of one, and 358,000 children between the ages of one and five, in eleven of Yemen’s governorates.

Help has also been provided for the repair and rebuilding of health facilities, such as the Republican Hospital, the largest and one of the most important health facilities in the southern port-city of Aden.

In terms of reconstruction, over AED6.3 billion (US$1.7 billion) has been provided to different sectors of the economy, with one particular focus being on electricity generation and supply, particularly in the governorates of Aden, Abyan, Hadramaut, Marib and Mahra. A solar-powered water desalination plant has also been built in Hadramaut.

Recognising the importance of ensuring that children are still able to benefit from education, expenditure has also been allocated to schools. In Aden, over 150 schools have been repaired and refurbished, with equipment including over 8,500 chairs, over 1,600 computers and 200 air-conditioners being provided. Other governorates too have benefited, with 15 schools in Dhala governorate, another nine in Lahej and a further 18 in Socotra being repaired or renovated. In remote and undeveloped Socotra, a fleet of buses was also provided, to enable children to reach their schools.

Further assistance has been devoted to the transport infrastructure, with AED534.80 million ($145.60 million) being spent by the UAE on civil transport vehicles and water and fuel transport vehicles in Aden and in the Marib, Hadramaut, Al Mahra and Socotra governorates. The UAE has also funded the reconstruction of Aden Airport and the modernisation of the port on Socotra.

Other funds have been provided as direct support for the Yemeni public budget, with AED2.63 billion ($715.47 million) having been provided to allow for the payment of the salaries of government employees.

In the year ahead, the UAE, through the Emirates Red Crescent and through other means, will continue to contribute extensively to meeting the needs of the Yemeni people.