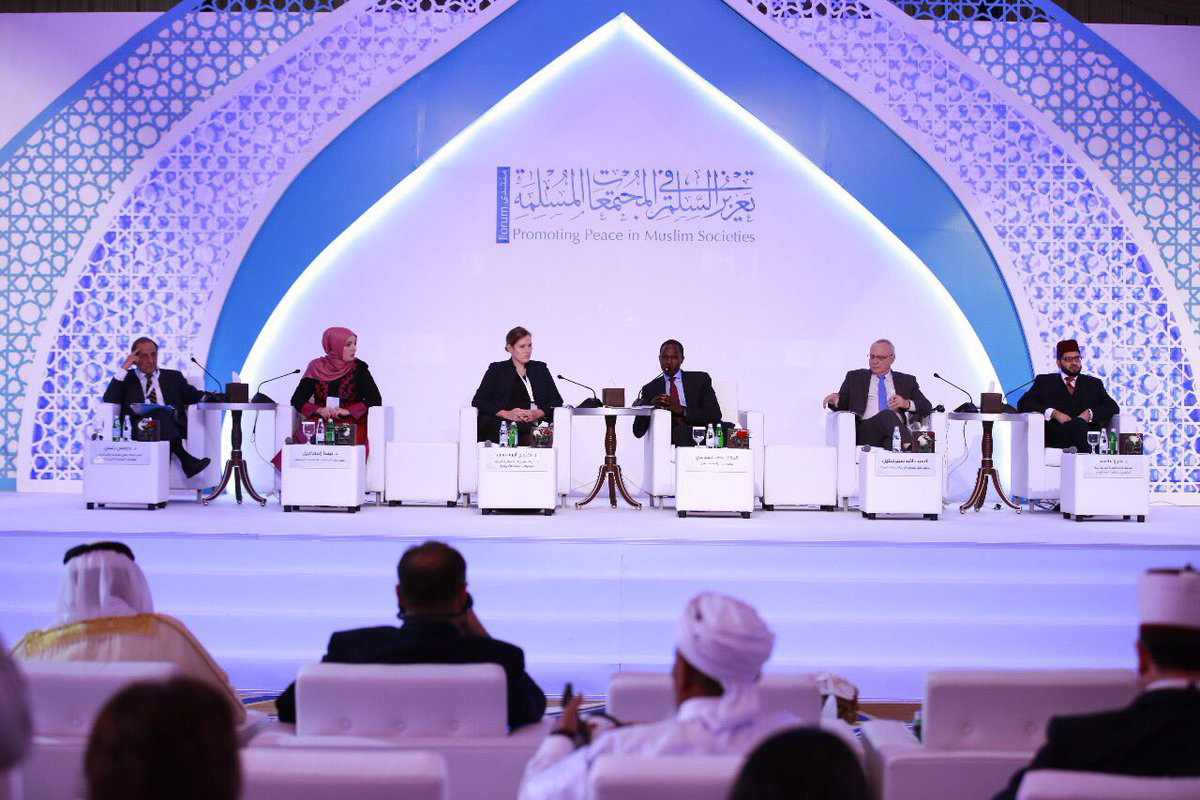 ABU DHABI, 13th December, 2017 (WAM) -- The events of 9/11 triggered a clash of civilisations between Islam and the West, a Kazakh Minister has told participants during a panel discussion at a forum in the UAE capital.

Speaking on the second day of the Forum for Promoting Peace in Muslim Societies, Nurlan Yermekbayev, Minister for Religious Affairs and Civil Society of Kazakhstan, said, "A clash of civilisations between Islam and the West has loomed after 9/11, which produced a distorted image of Islam, caused by the use of Islamic slogans by extremists and terrorists to cover their crimes."

Yermekbayev noted that problems related to religion are not caused by Islamic thought, but by the misinterpretations of Islamic teachings, which, he said, underlines the need to shed the light on the peaceful and tolerant nature of Islam.

"The solution to Islamophobia depends on Muslims themselves and their efforts to combat extremism," he said, emphasising the need for religious moderation.

The second day of the forum included panel discussions on ‘Islam and The World', ‘Fear of Islam: Causes and Contexts’, and were attended by senior officials, ministers of Islamic countries, and an elite of high-level scholars, decision-makers, and intellectuals.

Another speaker, Ahmad Al Ebadi, Secretary General of the Muhammadiyah Association of Scholars in Morocco, and a member of the Board of Trustees of the Forum for Promoting Peace in Muslim Societies, said that religions in general, and especially monotheism, were the greatest gift given to humanity.

"Religion allows precognition and promotes balance between good and evil, right and wrong, with the ultimate goal of achieving happiness of mankind, in this world and the next," he explained.

He added that the most notable problem is interfaith fear. "The ‘budget of fear’ is stupendous; global military expenditure stands at over US$1.3 trillion, a sum sufficient to feed more than half of the world's population. Only 7 percent of weapons purchased are used in times of war, which means that fear is expensive; putting an end to fear will allow us to use the wasted billions of dollars towards more useful goals," Al Ebadi said.

The session was moderated by Dr. Mohammed Mokhtar Juma, Egypt’s Minister of Religious Affairs and Endowments (Awqaf), and other speakers included Ahmed Ould Ahl Dawood, Minister of Islamic Affairs and Traditional Education of Mauritania, who discussed the universal and noble message of Islam, saying it extends way "beyond globalisation."

"Islam recognises that there are a plurality of religions on this earth, and gives the right to individuals to choose the path which they believe to be true. It believes that there shall be no compulsion in accepting religion, and that nations have their own particularities," he noted.

He pointed to the most important characteristics of Islam and its message, saying "the message of Islam is timeless, yet suitable for the developments of modern world. It is a humanitarian and moderate message, which seeks to achieve balance between this world and the next."

Another session featured an open dialogue between guests and the audience, and included an overview on the history of 'Shoulder to Shoulder', an organisation created in the wake of the widespread attacks against Muslims in the post 9/11 era. The session also explored ways to put an end to fear of Islam in non-Muslim societies.

Speaking on ways to combat Islamophobia through practice, one of the panelists, Catherine Osborn, President of Shoulder to Shoulder, said that the organisation is a coalition of various religions that work to combat anti-Muslim and anti-Semitic movements in the American context. "This is enacted through discussion, media and conversational reform. Unfortunately, our work has not been institutionalised by the government so we are working on building momentum together to develop the proper infrastructure for the communities that we are seeking to effectively serve," she said.

Another speaker was Rabbi David Saperstein, an American rabbi, lawyer, Jewish community leader and former US Ambassador, who said, "We treat fellow brethren to help each other and understanding each other. We collectively celebrate each other’s holidays. Jews and non-Jews live together, distribute charity together, visit the sick together and visit the dead together. We find it very important to lift our teachings from one another to solidify one another. However, we have sometimes different foundational structures which requires a lot of work and education to get over some obstacle."

The fourth annual Forum, which closes today, is being held under the patronage of H.H. Sheikh Abdullah bin Zayed Al Nahyan, Minister of Foreign Affairs and International Cooperation, with the participation of more than 700 Arab and Muslim scholars, alongside high-level intellectual and religious dignitaries representing different intellectual, religious and cultural trends, from around the world.