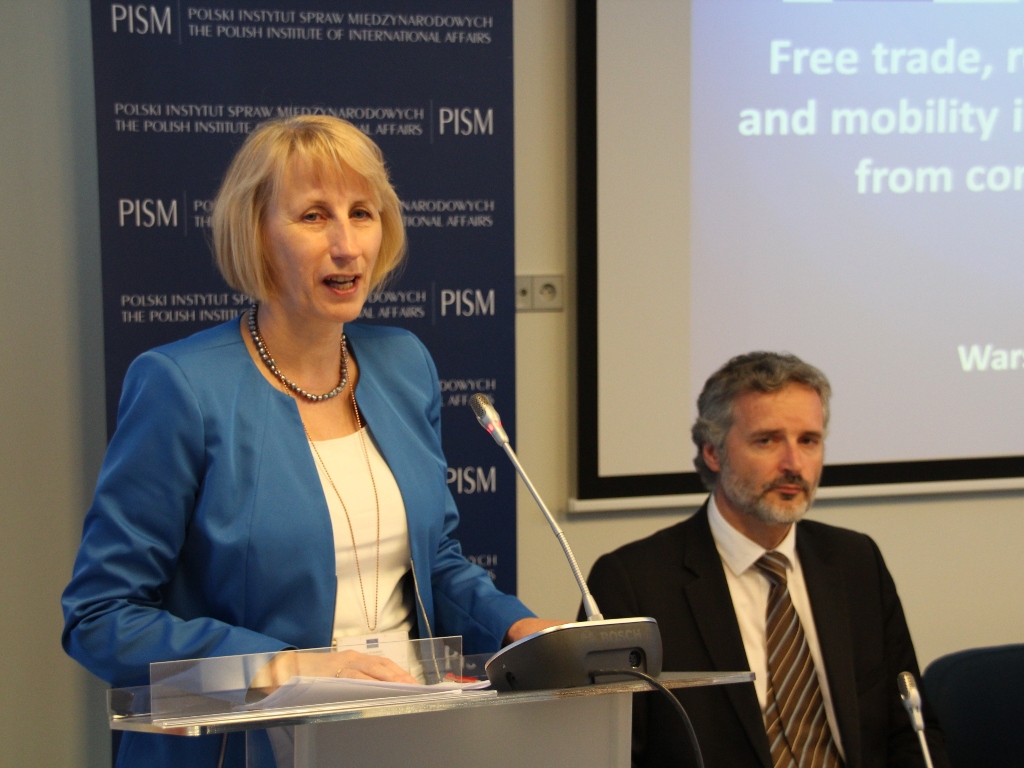 DUBAI, 8th April, 2018 (WAM) -- Two-way trade between GCC countries and the European Union has exceeded EUR143 billion in recent years, according to a senior official of the European Union visiting the UAE to attend the Annual Investment Meeting taking place in Dubai from April 9 to 11, 2018. This confirms that the European Union is the largest trading partner of the GCC, when counted as a single economy.

The eighth edition of the investment meeting is being organised by the UAE Ministry of Economy and held under the patronage of His Highness Sheikh Mohammed bin Rashid Al Maktoum, Vice President and Prime Minister of the UAE and Ruler of Dubai.

The three-day meeting of high-profile officials that includes 25 federal ministers, 19 mayors, eight heads of organisations, one head of parliament and investors, will see the signing of a number of agreements and announcements that are meant to help countries boost the flow of Foreign Direct Investment, FDI.

In an interview prior to AIM, Ewa Synowiec, Chief Advisor to the European Commission and the General Directorate of Trade, discussed her organisation’s vision on investments and the volume of international trade and investments between the EU and GCC countries, in general, and with the UAE.

Synowiec said that in January 2017, Vice-President of the European Commission Jyrki Katainen, responsible for jobs, growth, investment and competitiveness, paid an official visit to UAE and met with officials of the Government of Dubai. During these meetings, Katainen presented the Investment Plan for Europe as one of the ways to increase economic links between the UAE and the EU. The Investment Plan seeks to mobilise private investment for business partners in the UAE.

"During his visit, VP Katainen's Emirati counterparts also encouraged him to consider increasing bilateral economic cooperation between the EU and the UAE (in addition to the EU-GCC level) and, as a result, I am happy to say that in January 2018 the EU and the UAE signed a bilateral Cooperation Arrangement to boost relations in numerous fields, including education, transport, trade, enterprise, environment, health and consumer protection, as well as research and innovation," she said.

Regarding the economic situation in the Middle East, Synowiec said it should be noted that 2017 marked the weakest real GDP growth in the Gulf region in recent years. The marked slowdown reflected direct and indirect impacts of the fall in global energy prices, fiscal consolidation weighing on non-oil activities, and lower liquidity in the banking sector, as government deposits were drawn down.

Synowiec noted, "We believe that government-introduced stimulus programs and some visible economic reform efforts are going to drive the aggregate growth of the GCC up in 2018. For 2019, the outlook for oil exporters is even more positive as oil production cuts might expire and the major event, EXPO 2020, is drawing closer."

All GCC members have, in recent years, developed longer-term economic diversification plans to reduce their fiscal and external dependency on oil, and aimed at raising private sector employment of GCC citizens. The diversification of GCC economies away from oil has progressed, as non-oil production and exports are reportedly growing and some progress has been made to diversify fiscal revenues, in particular in the Kingdom of Saudi Arabia and the United Arab Emirates. However, little has been achieved, so far, in raising labour market participation of nationals and increasing energy efficiency.

When asked about her expectation from the 8th edition of the Annual Investment Meeting, she noted, "I am expecting an exciting event with the influential worldwide FDI thinkers and experts offering the latest investment intelligence. It is, therefore, a pleasure for me to address the participants in the session on harnessing globalisation, as being one of the big challenges currently for international trade.

"The EU wants to share its experience and approach in the implementation of trade and investment policies, and I am keen to hear from other panelists and speakers about the latest developments and forecasts for the future. This event will provide excellent opportunities to gather a collective intelligence with officials and policymakers, as well as private investors and business leaders, with the aim to enhance cooperation.

"The EU considers investment to be a critical factor for economic growth and jobs for all countries in the world. This is particularly the case in the EU, as its economy is heavily dependent on being open to trade and investments to create value-adding businesses and employment. In fact, the EU is both the largest provider and destination of foreign direct investment in the world, measured by stocks and flows."

In particular, she added, outward investment makes a significant contribution to the international competitiveness of European companies, whereas inward investments create jobs, boost trade and foster research and innovation, resulting in the EU being the foremost investor in many countries.

"This data is very telling about what importance investments have. The EU, therefore, is looking for interesting discussions, being part of the latest worldwide discussions on sustainable growth and the latest technologies and innovations," Synowiec said, adding, "I expect high-level discussions during the conference sessions, as well as important networking with worldwide leaders, meaning a lot of food for thought to bring back home from the conference."

Answering a question on how high the trade volume between the EU countries and the Gulf is, and specifically with the UAE, she said that the GCC is an important trade partner for the EU. In 2017, the EU’s overall trade with the GCC reached some EUR143 billion, making the region the EU's sixth most important trading partner and fourth most important export market (with EUR100 billion in exports). EU-GCC trade has been steadily growing between 2007 and 2017, with total trade increasing by 54% in ten years. The EU remains the number one trading partner of the GCC.

She further said that EU exports to Gulf Cooperation Council countries are diverse, but focused on industrial products (91%), such as power generation plants, railway locomotives and aircraft, as well as electrical machinery and mechanical appliances.

Trade in services has similarly seen growth, with total services reaching almost EUR40 billion in 2016, which put the GCC at 4.7 percent of the EU’s total trade in services.

Regarding the value of the European Union’s trade with the UAE, she said that the UAE represent by far the largest export market for the EU in the GCC region, with exports amounting to EUR42 billion in 2017 and accounting for 2.3 percent of total EU exports. These figures indicate that the UAE was the seventh largest destination for EU products in 2017.

Total trade in goods between the EU and the UAE amounted to EUR52.6 billion. The most important goods in EU exports were machinery and transport equipment (more than half), manufactured goods and chemicals.

The largest share in imports from the UAE to the EU market have mineral fuels, lubricants and other related materials, as well as manufactured goods.

The EU-UAE trade in services amounts to almost EUR15 billion.

"There is a great potential to further increase our mutual trade, both at the GCC level and bilaterally between the UAE and the EU. The efforts taken by the GCC countries, with the UAE in the lead to diversifying their economies, will lead to an expansion of their export base and is likely to reduce the current trade deficit that the GCC has with the EU. Investment by the EU companies to the GCC will have a crucial role in this transformation process," she said.