Swiss charity to deliver university education to refugees in Jordan 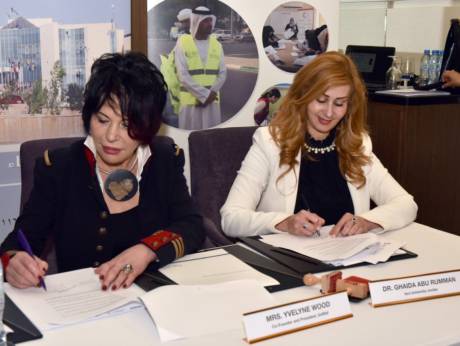 ABU DHABI, 7th May, 2018 (WAM) -- University for Refugees, UniRef, an international Swiss humanitarian charity organisation, has announced its new project of delivering university education and vocational training in Jordan’s refugee camps, in partnership with Jordan Red Crescent and Al-Isra University in Jordan. The new UniRef mission is being implemented for the benefit of war victims in the Middle East.

Addressing the media at a press conference held in Abu Dhabi today, Yvelyne Wood, Co-Founder and President of UniRef, said, "The beneficiaries of UniRef are refugees living in camps, urban refugees and the host community, many of whom stay between 7 and 15 years in sorry conditions, and less than 1% have access to university education."

"More than 750,000 refugees are currently hosted in Jordan as urban refugees and in camps. There are three main camps in Jordan: Zaatari, Azraq and Emirati-Jordanian camp. Today, we are pleased to announce our new initiative that is aimed at taking university courses and vocational training to refugees living in the camps under the protection of Jordan Red Crescent," she added.

Geneva-based UniRef, founded in 2013 as an NGO specialised in providing university education and vocational training to refugees, has been rendering pioneering services in refugee camps placed under the protection of United Nations High Commissioner for Refugees (UNHCR) and the Red Crescent, having done exceptional work in Burundi, Africa’s Great Lakes Region where Congolese refugees are housed in four camps, victims of 20 years of armed conflict.

UniRef will offer two levels of courses for the refugees in Jordan’s camps. The university degrees will be offered in Computer Science, Mobile Engineering and Logistics Management. Recognised by the Jordan Ministry of Higher Education, each course will be of 12 months’ duration, and will be delivered by faculty from Al-Isra University.

Wood explained, "When they graduate, UniRef students will integrate into the labour market and support their families. A refugee who becomes financially independent leads with him/her other five people who are dependent on him or her. The UniRef graduates will be able to work in the camps, in the host country and, in the long term, will be able to contribute to the reconstruction of their own country."

The Jordan initiative is currently under implementation, and academic courses will begin from 2019. Total number of beneficiaries in the first year will be 250 students. Meanwhile, UniRef has announced plans to open a liaison office in Abu Dhabi by the end of 2018, and will open an operations office in Jordan shortly.

The press conference was attended by Khalid Saif Hamoud Abdulla Almemari, Honourary Ambassador of UniRef in the Middle East; Maya Tissafi, Ambassador of Switzerland to UAE; Jumaah Al Abadi, Ambassador of Jordan to UAE; Dr. Ahmed Meskati, UN Ambassador of Education in GCC and MENA, and a host of other ambassadors and international representatives.