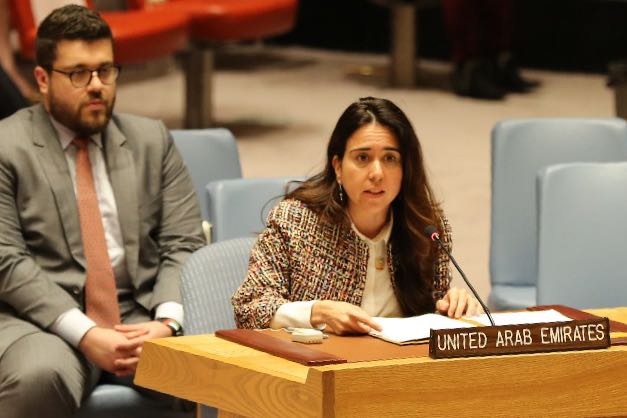 NEW YORK, 26th June, 2018 (WAM) -- "Diplomacy will always be key to solving the region’s crises, so we must renew our efforts to see it strengthened," said Lana Nusseibeh, Ambassador and Permanent Representative of the UAE to the United Nations, at a critical UN Security Council debate on the situation in the Middle East and North Africa chaired by the Deputy Foreign Minister of the Russian Federation, Sergey Vershinin.

Ambassador Nusseibeh called on Member States to lend their support to like-minded countries of the ‘Arab Centre’, who are shifting the Middle East towards stability, development, and rejection of any state system based on extremist ideology.

She underlined that true stability in the Middle East requires Arab decision-making and leadership. She also iterated that it was critical to avoid repeating the mistakes of the great powers after the First World War who believed they knew better than the people of the region, who are currently suffering the consequences of that approach. Nusseibeh called for the international community to recommit to the central principles and concepts which spearheaded the creation of the current world order and to put an understanding of historical context at the center of policy making.

In the context of resuming dialogue for a peaceful resolution in the Middle East, Ambassador Nusseibeh reiterated that all actors must accept the principles of the UN Charter. She stated that Iran, in particular, has consistently violated these norms and must end its irresponsible presence in Arab countries in the form of militias and terrorist groups. Additionally, she voiced support for the statement made by the Representative of the United States: "In warzone after warzone and terrorist act after terrorist act, we find Iran and Hezbollah at the root of violence in the Middle East."

Nusseibeh reminded the Council that prior to the current situation in Yemen, the legitimate government headed a functional state and had a clear process for political transition in the country. She stressed that the Council should have acted when the Iranian-backed Houthis first took Sana’a in September 2014, causing the breakdown of the Yemeni state apparatus and resulting descent into civil war. She said, "If the Coalition had not entered at the request of the legitimate government and in accordance with Security Council Resolution 2216, we would today be dealing with a lawless state dominated by an illegal militia who represent just three percent of the population, but who seek to control the fate 27 million Yemenis."

On the longstanding situation in the Occupied Palestinian Territories, Nusseibeh said, "The call for a Palestinian state will remain a rallying cry for proponents of extremist ideologies," underlining that until the rights of Palestinians were met, this issue would be one of the root causes of regional instability and would prevent Israel from having a secure place in the region.

"Diplomacy in our region will not thrive unless we restore the deficit of trust that exists. To do that, we need honest and transparent partners and a collective vision of our shared security," she added.

She went on to say that the UAE took diplomatic measures against Qatar because of their "support for terrorist groups which undermine stability in the region and around the world."

On the situation in Syria, the ambassador emphasised that a prominent Arab role is essential to resolving the conflict. She noted that as an Arab nation, Syria’s future lies in an Arab regional solution, with the support of the international community and the UN, applauding the defeat of Daesh in Iraq and congratulating the Iraqi people on the success of recent parliamentary elections. Furthermore, she expressed that the UAE looks forward to a renewed Iraqi role in the Arab political scene.

Nusseibeh said, "Bellwethers for thriving societies are the protection of the rights of minorities and celebration of diversity of ethnicity and creed," noting that building and maintaining strong institutions are key to this.

The ambassador further highlighted the UAE’s commitment to strengthening its own institutions based on values of inclusiveness, transparency, and good governance, which has produced strong social trust. She noted that the international community should respect the Arab world’s equal voice in deciding its collective future and called for the renewal of efforts to build strong institutions across the region and rebuild the trust deficit.

"An optimistic, forward-looking model for the region is critical to our collective success. We should not focus solely on the future that we don’t want; we must instead begin to envision where we want to go and what will be required to reach that destination," she concluded.??