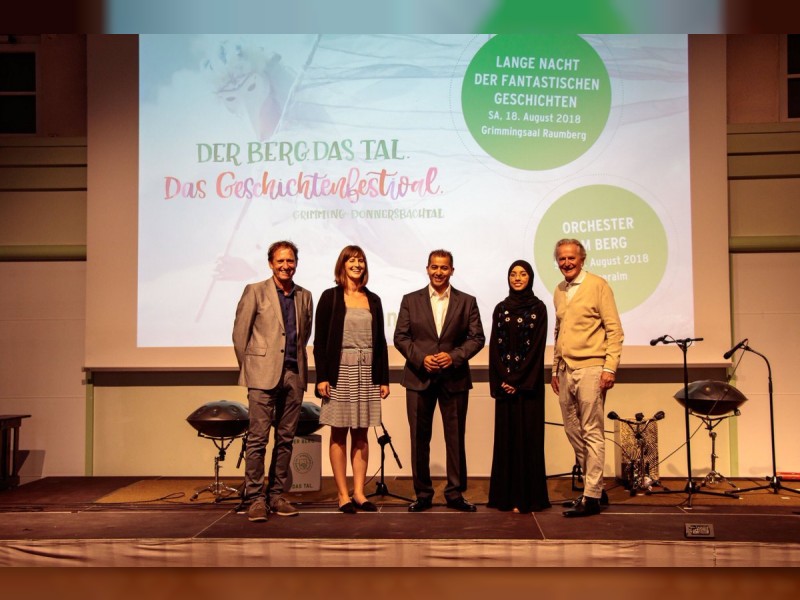 VIENNA, 29th August, 2018 (WAM) -- The UAE Embassy in Vienna has participated in the "International Storytelling Festival" that was held in the Austrian province of Styria.

The festival invited the "Queen of Sands," Shayma Al Mughairy, to participate in the event, as the first artist to represent the Arab world.

The festival, which hosted 83 artists from over 20 countries, is unique in Austria, is a major festival in Europe, and is the second oldest storytelling festival in the world.

Folke Tegetthoff, Director of the Festival, welcomed the embassy’s participation and praised the performance of Al Mughairy.

During her performances over two nights, Al Mughairy charmed the audience with her talent and transported them to the Arab world through the art of drawing on sand. She also demonstrated the history of the UAE and highlighted its close friendship with Austria.

"Our close cooperation with the UAE Embassy in Vienna and our friendship with Hamad Ali Al Kaabi, UAE Ambassador to Austria, have made the festival and the participation of the Arab artists possible. We hope to cooperate and work together in the future," Tegetthoff said.

During the festival, Al Kaabi highlighted the importance of the art of storytelling in his opening speech, where he described the art of storytelling as a wonderful tool that requires the use of hearing, sight and feeling to promote understanding and create cohesion. He added that storytelling is an important part of Emirati culture, as it was practised by the residents of the desert in the Arabian Gulf for 500 years.

He also expressed his happiness at the presence of Al Mughairy at the festival.

The festival was established in 1988, attracts around 15,000 visitors annually, is held in four Austrian provinces in Austria over three weeks, and features around 70 shows. Artists from around the world can tell their stories in different ways, including through classical storytelling or combined with other art forms, such as music, dance, comedy and silent acting.

The UAE’s participation is part of its celebration of the Year of Zayed, which is dedicated to reviving the memory of the late Sheikh Zayed bin Sultan Al Nahyan, as well as his values and accomplishments and the UAE’s culture.