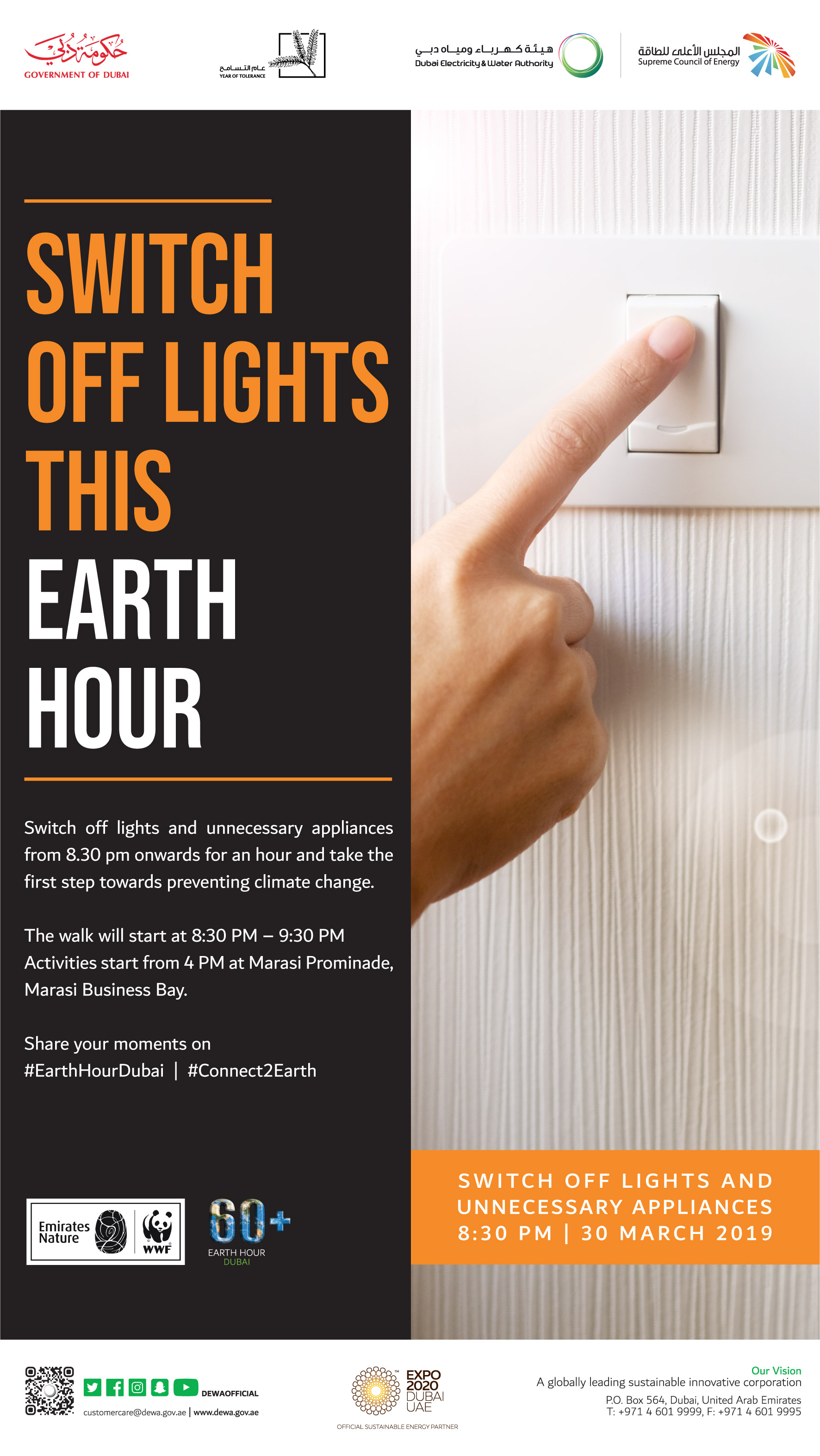 DUBAI, 27th March, 2019 (WAM) -- The Dubai Electricity and Water Authority, DEWA, is encouraging the people and public and private organisations in Dubai to join millions of people around the world to show their support for Planet Earth, by switching off unnecessary lights and electric appliances from 20:30 to 21:30 local time.

Dubai’s landmarks will also take part in the event by turning off their lights during Earth Hour. DEWA is organising Earth Hour activities on 30th March 2019 under the patronage of H.H. Sheikh Hamdan bin Mohammed bin Rashid Al Maktoum, Crown Prince of Dubai and Chairman of the Executive Council of Dubai.

DEWA has also asked the public to promise to protect Planet Earth and reduce carbon emissions that cause global warming and climate change, on www.earthhour.ae and on social media using the hashtags #EarthHourDubai, and #Connect2Earth.

"DEWA supports Dubai's efforts to promote a culture of rational consumption and highlights the need to reduce carbon emissions. Dubai was the first Arab city to participate in Earth Hour in 2008. This demonstrates its pioneering role in supporting and embracing initiatives and activities that enhance public awareness on environmental issues, support sustainable development, and contribute to achieving national and local strategies. These include the Dubai Clean Energy Strategy 2050, to make Dubai the city with the lowest carbon footprint in the world, and the Carbon Abatement Strategy, to reduce carbon emissions by 16 percent by 2021," said Saeed Mohammed Al Tayer, Managing Director and CEO of DEWA.

DEWA has invited the public to take part in the activities that it will organise at Marasi Promenade Business Bay in Dubai from 16:00 to 22:00. There will be various activities to promote environmental awareness and the rational use of electricity and water. The "Earth Hour Walk" will begin at 20:30 with a number of government director generals, officials, public figures, and representatives from the public and private sectors, universities and schools. DEWA, in cooperation with the Roads and Transport Authority in Dubai, will provide free shuttle buses from Business Bay metro station, to and from the event every 15 minutes. There will be free parking at the venue.

DEWA is organising the Earth Hour event for the 12th consecutive year, under the umbrella of the Dubai Supreme Council of Energy; and in partnership with the Emirates Wildlife Society (EWS) in association with the World Wide Fund for Nature, and with the support of Dubai Holding. Last year, DEWA recorded 323MW reduction in electricity use; equivalent to a reduction of 140 tonnes of carbon emissions.