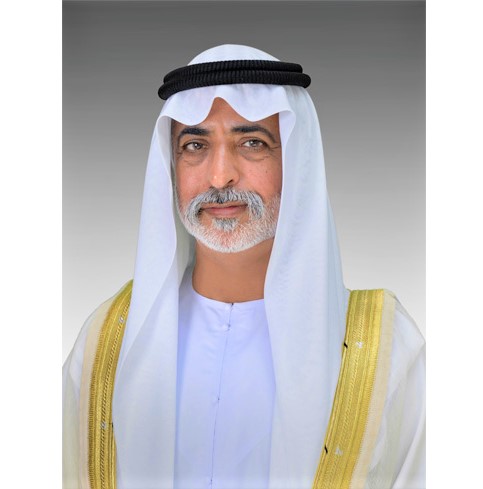 ABU DHABI, 27th April 2019 (WAM) - Sheikh Nahyan bin Mubarak Al Nahyan, UAE Minister of Tolerance, has praised the enormous participation of all segments of the society, including institutions, individuals, students, families, local and federal entities Sheikh Nahyan made the remarks while addressing a ceremony organised by the Ministry on Friday to celebrate the International Workers' Day, under the slogan "Together in the Emirates of Zayed" .

The ceremony, which was organised in collaboration with a large number of partners in the Workers' City in Saadiyat, Abu Dhabi, witnessed various awareness activities that focused on security, community and health topics.

"Such a significant participation reflects the real image of co-existence in the UAE affirming strength and durability of the community's cohesion and highlighting the tolerance, communication and cooperation that we have all learned from the founding father late Sheikh Zayed Bin Sultan Al Nahyan, " Sheikh Nahyan added.

He continued by saying the spontaneous response by all segments of society to participate in the Ministry of Tolerance's celebrations of the International Workers' Day, is a true value that makes the UAE a unique example in the world worth to the capital of the global tolerance.

The Minister has recently launched a number of initiatives, among them Mobile Hospitals Initiative', which will continue offering free medical services to workers through the year at the workers villages nationwide. In addition, he launched the second season of the Tolerance Cricket Cup for all workers in the country and the first Tolerance Kabaddi Cup.

Present at the ceremony were Nasser bin Thani Al Hamli, Minister of Human Resources and Emiratisation, Dr. Mugheer Khamis Al Khaili, Chairman of the Department of Community Development in Abu Dhabi, and Afra Al Sabri, Director General of Minister of Tolerance's Office, Saeed Eisa Mohammed Al Khyeli, Director General of ZonesCorp, Saif Al Suwaidi, Undersecretary of the Ministry of Human Resources and Emiratization for Human Resources Affairs, Dr. Omar Al Nuaimi, Assistant Undersecretary of the Ministry for Communication and International Relations, and Abdullah Al Nuaimi, Executive Director of the National Programme for Tolerance, along with a number of ambassadors of sisterly countries, senior officials, investors, businessmen and around 5,000 workers.

In his speech to the workers, Sheikh Nahyan said, "The United Arab Emirates deeply appreciates your contributions to its development and progress. Our country has been built upon the skills and hard work that you, your brothers and friends have given to the UAE. On this Labor Day, we thank you for your excellent work and unfailing efforts to make the UAE a country that is peaceful and welcoming to everyone. I am honored to join you this evening to celebrate this annual event together."

He continued, "The UAE shares its history with all of you. Our nation’s founder, the late Sheikh Zayed bin Sultan Al Nahayan, deeply valued and respected you as an important component of our global society. He made the UAE a country that welcomes talented and industrious people to live and work under the protection of its large Arab tent. We are proud that today’s festivities are being held under the theme of Together in the Emirates of Zayed".

"Our celebration this evening is an expression of our country’s strong commitment to tolerance. In this Year of Tolerance, I am delighted to announce the launch of the second annual Tolerance Cricket Cup, which was a huge success last year. I am also announcing today the launch of the first Tolerance Kabaddi Cup competition. Both cups are nation-wide tournaments played among teams of players representing different workers’ villages from across the country. In addition, I am pleased to announce the launch of a health care and fitness campaign that will improve the quality of life for all workers nation-wide. I thank all partners and sponsors of these activities that extend the values of human fraternity, harmony, tolerance and peace that we all enjoy in the UAE," he added.

"Thank you all for being part of the UAE community and for the critical part that you have played in building our country. Thank you for your help in making our Emirates of Zayed true to his vision as a country of peace, progress and prosperity. And thank you for your efforts to support the cooperation and friendship between your countries and the United Arab Emirates. I am very pleased to join with you in celebrating Labor Day in our Year of Tolerance," Sheikh Nahyan concluded.

Meanwhile, Nasser bin Thani Al Hamli, Minister of Human Resources and Emiratisation congratulated the UAE workers on the International Workers' Day, praising the care and support of the UAE represented by the wise leadership to the workers as one of the most important segment of society. He stressed that the ceremony reflects the community cohesion highlighting values of coexistence in the UAE as a unique example in the world.

He expressed his appreciation to Sheikh Nahyan bin Mubarak Al Nahyan for patronizing the ceremony and his great role in promoting the values of tolerance, coexistence and acceptance of others locally and globally.

Saeed Eisa Mohammed Al Khyeli, Director General of ZonesCorp, expressed his appreciation to Sheikh Nahyan bin Mubarak Al Nahyan for sponsoring the International Workers' Day, stressing that it is an opportunity to highlight the country's gratitude for its workers.

"Workers in the UAE enjoy full support and care with work environment and accommodation complying with international standards. Workers' rights are always protected by law, because They are an important part of UAE society," Al Khyeli said.