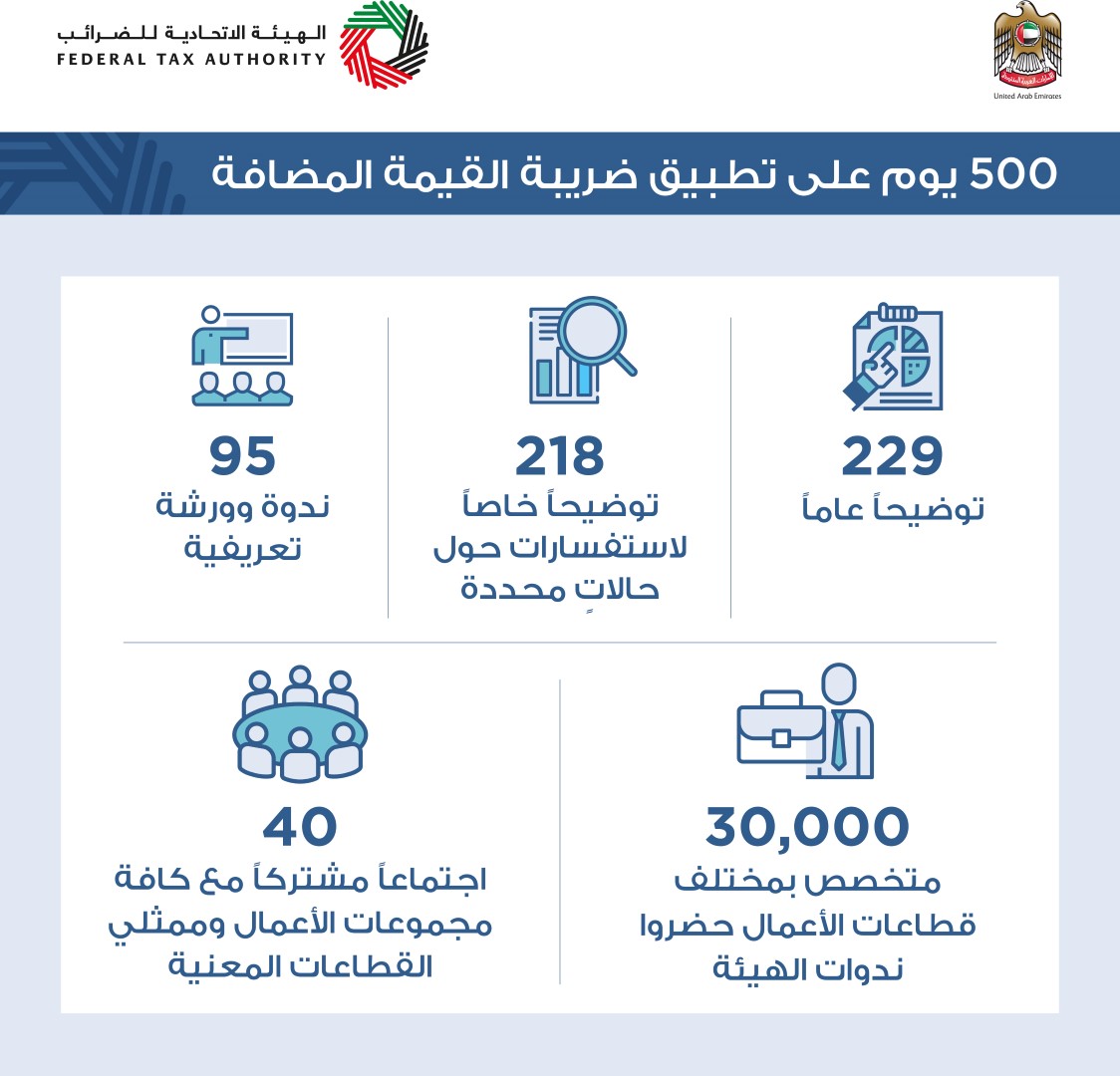 ABU DHABI, 15th May, 2019 (WAM) -- As the Federal Tax Authority, FTA, marks 500 days of the Value Added Tax, VAT, in the UAE, Khalid Ali Al Bustani, Director-General of the FTA, revealed that the rates of compliance with tax laws and procedures have increased exponentially among all taxable businesses.

The tax came into effect on 1st January, 2018, at a rate of five percent on the supply of most goods and services.

In a press statement issued by the authority, Al Bustani added, "Compliance was made possible through the seamless, flexible, and clear procedures the FTA has rolled out through electronic, fully paperless systems that are among the most advanced of their kind in the world, underpinned by a sophisticated legislative environment that meets the highest standards in the field."

"The FTA implemented an easy-to-use system for submitting tax returns and paying taxes via the e-Services portal, available 24/7 on the FTA’s official website," he added.

Al Bustani said that as part of the authority’s efforts to manage and collect federal taxes, various tax refund mechanisms have been launched for legally eligible groups to recover VAT, including the Tax Refunds for Tourists schemes, of which nearly 8,110 transactions were processed on a daily basis.

Al Bustani also highlighted the success of the VAT Recovery on the Building of New Residences by UAE Nationals programme by saying, "The system has received more than 800 applications, 375 of which were approved, allowing applicants to recover AED14.74 million in taxes incurred on the construction of their homes."

He continued, "As of April 2019, the FTA began implementing the VAT Refund Mechanism for Visiting Foreign Businesses, receiving a number of refund requests for taxes incurred in 2018 by foreign businesses."

Stating that the UAE’s tax system has earned praise from experts and official entities in the UAE, the region, and the world, he said, "This is evident from the FTA's participation in the Arab Regional Tax Forum, which Dubai hosted in March 2019, as well as its participation in April in the Belt and Road Initiative Tax Administration Cooperation Forum in China, where it showcased the UAE’s experience with implementing tax laws."

These achievements and the tremendous progress the UAE has achieved in its tax systems have culminated in the country being elected to serve as the Vice Chairman of the Board of Directors of the Belt and Road Initiative Tax Administration Organisation, he said.

Stating that the number of users who registered for VAT has exceeded 300,000 companies, individuals, and tax groups, he asserted the FTA’s commitment to maintaining continuous communication with all parties concerned with the tax system via guides on VAT, e-learning programmes, educational short films, and infographics, in addition to public clarifications and continuously updated information on its website.

In terms of new campaigns, the FTA launched the tax invoice campaign in the first quarter of 2019, to promote the use of tax invoices in all business transactions in tandem with the "Tax Clinic" campaign launched in August 2018 to establish direct contact with business sectors, raise tax awareness among them and identify any obstacles they may be facing.

He also lauded the close cooperation with the Federal Customs Authority and local customs departments in order to link their systems with the FTA's network, which contributed to the smooth implementation of the tax system and maintenance of the flow of foreign trade.

"The authority has spared no effort in assisting businesses to comply with tax regulations and procedures, organising several introductory and consultation meetings to prepare the private sector for dealing with the tax system," he said in conclusion.