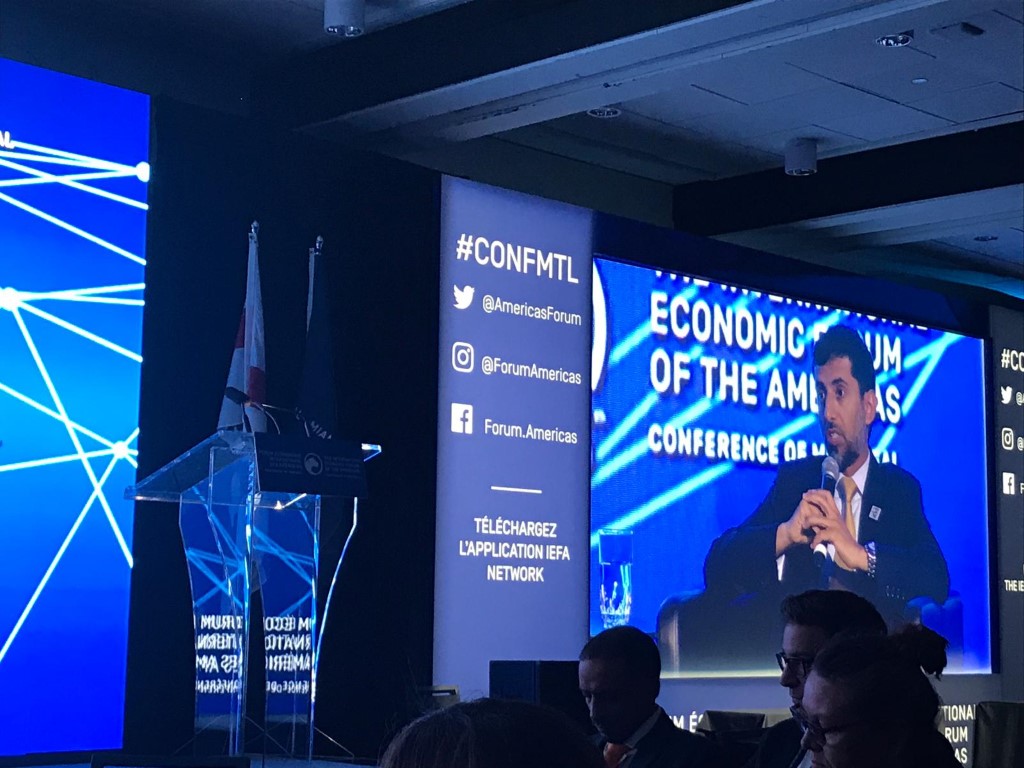 ABU DHABI, 15th June, 2019 (WAM) -- The United Arab Emirates participated in the 25th edition of the International Economic Forum of the Americas, which convened in Montreal on June 10-13, and brought over 200 of the world’s leading political, economic and industry experts to debate the most pressing issues facing Quebec, Canada, and the global community.

Suhail bin Mohammed Faraj Faris Al Mazrouei, Minister of Energy and Industry, who led the UAE delegation to the event, highlighted in a panel session titled "The Geopolitics of Energy Transformation" the stimulus packages provided by the UAE government to propel FDIs in the energy field.

"Up to US$160 billion of new investments are being directed to the energy field, most of which are up for grabs for the private sector as part of the UAE Energy Strategy 2050," said the minister, noting that the UAE is a key investor in Canada and all over the world that helps create a myriad of job opportunities.

He underlined the importance the UAE government is attaching to the establishment of partnerships, not only with major world companies but also with various entrepreneurs and SMEs as well.

The minister elaborated on the competitive edge boasted by the UAE with regards to renewable energy and the achievements made in this field, citing the innovative developments launched by Masdar and those established by the UAE in Saudi Arabia, Europe and Americas.

Al Mazrouei met on the sidelines o the conference with a number of top officials, including Navdeep Bains, Minister of Innovation, Science and Economic Development of Canada; Jason Thomas Kenney, Premier of Albert; Angel Gurría, Secretary-General of the Organisation for Economic Co-operation and Development; Minister of Infrastructure and Communities, François-Philippe Champagne; Amarjeet Sohi, Minister of Natural Resources; and Minister of International Trade Diversification Jim Carr. The meetings focused on the prospects of fostering bilateral relations, particularly in the energy domain.

The Conference of Montreal, presented for the first time in 1995 by the International Economic Forum of the Americas, is committed to heightening knowledge and awareness of the major issues concerning economic globalization, with a particular emphasis on the relations between the Americas and other continents.

The Conference also strives to foster exchanges of information, to promote free discussion on major current economic issues and facilitate meetings between world leaders to encourage international discourse by bringing together Heads of State, the private sector, international organizations and civil society.