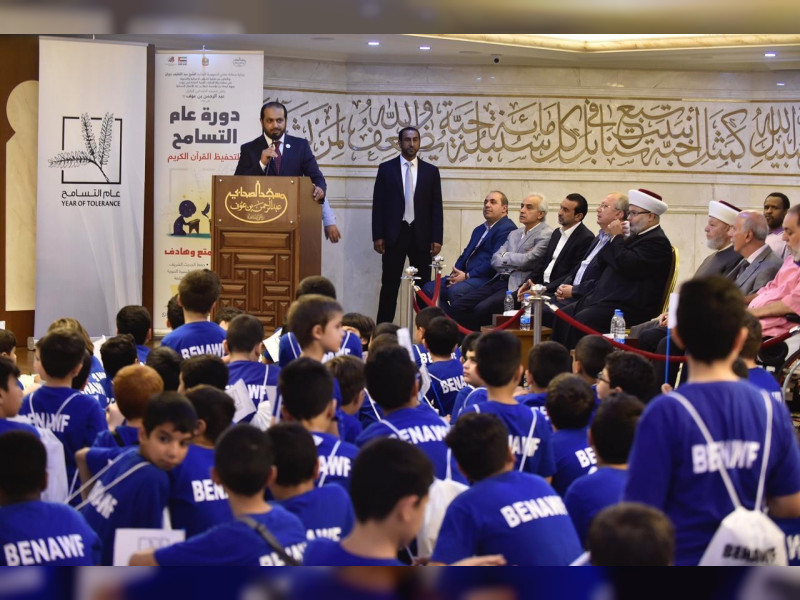 BEIRUT, 10th July, 2019 (WAM) -- The "Year of Tolerance Session" is being held in Beirut, through a grant from the Khalifa bin Zayed Al Nahyan Foundation, and under the direct supervision of the Humanitarian and Developmental Affairs Attaché at the UAE Embassy in Lebanon.

Hamad Saeed Sultan Al Shamsi, UAE Ambassador to Lebanon, visited the students who are taking part in the five-week session, which was launched at the beginning of July at the Abdulrahman bin Auf Mosque in Ras Al Naba'a. He was received by the Representative of the Mufti of Lebanon and Salah Al Din Fakhri, Director of Administrative Affairs in Dar Al Ifta, along with several officials.

The session is witnessing the participation of over 280 students between the ages of 15 and 16, who are being guided on the true meanings of the Islamic religion, and learning about giving, fraternity and social solidarity, through visiting community homes and humanitarian centres and contributing to health and environmental campaigns.

Al Shamsi was briefed by the session’s supervisors about its various activities and goals while touring some of its workshops and classes.

In his speech during the visit, Al Shamsi said, "The UAE’s leadership is supporting Lebanon and its people through various development, charity, cultural and social projects. The Khalifa bin Zayed Al Nahyan Foundation and other Emirati entities, organisations and associations support this humanitarian direction."

"The UAE is based on the foundations of tolerance and supports moderate religious discourse, which must reign in our communities and have the final word, in light of the growing prejudices, the spread of false concepts, and the negative role of terrorist groups in spreading ideas and transmitting messages that do not represent the values of Islam and its truths," he added.

In his speech, Sheikh Ali Mustafa, Imam of the Mosque, thanked the UAE’s leadership and people, as well as the foundation for its grant, which reflects the UAE’s civilisation established by the late Sheikh Zayed bin Sultan Al Nahyan.

The mosque’s committee awarded Al Shamsi an honouring armour to thank the UAE and its donor organisations for supporting Lebanon. Awards were also distributed to the students.