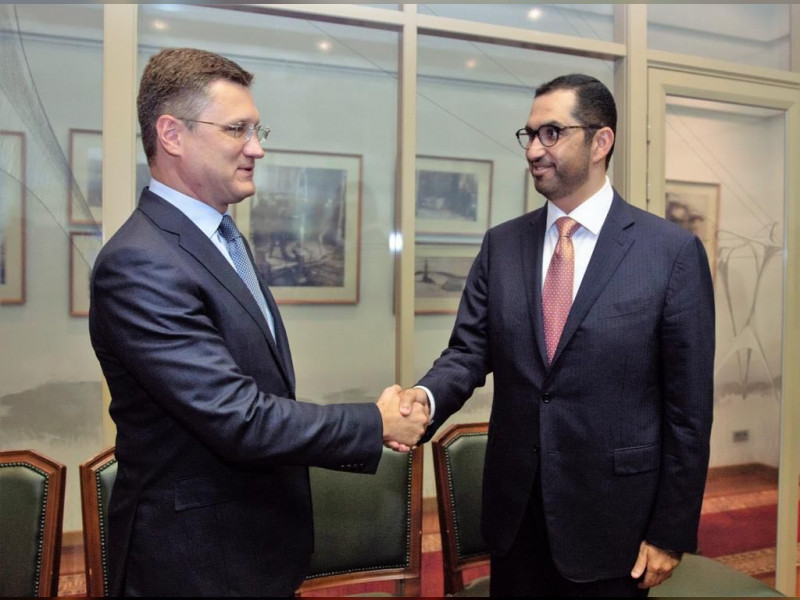 MOSCOW, 11th July, 2019 (WAM) -- Dr. Sultan bin Ahmad Sultan Al Jaber, Minister of State and Group CEO of the Abu Dhabi National Oil Company, ADNOC, met with Alexander Novak, Minister of Energy of the Russian Federation, during a visit to Moscow, as ADNOC explores opportunities to expand its strategic partnership and investment base across its entire value chain.

During the meeting, Dr. Al Jaber conveyed the greetings of the UAE leadership to the government and people of Russia and reaffirmed the deep-rooted ties between both countries, stressing the UAE's keenness to strengthen bilateral relations.

Dr. Al Jaber noted his appreciation for Russia’s role in the OPEC/Non-OPEC Cooperation Agreement, which continues to have a positive impact on balancing oil markets. He also elaborated on ADNOC’s ongoing transformation, centred on maximising value, and expanding the company’s strategic partnership base to stay ahead of the world’s growing demand for energy.

Dr. Al Jaber said, "This visit reflects the strong and friendly ties between the UAE and Russia. As our countries continue to build on strong trade relations, there is significant potential for collaboration in the energy sector. ADNOC is open to exploring partnership and co-investment opportunities with Russian energy companies across the full value chain where they make economic sense and drive significant returns for both sides.

"As we respond to the evolving energy landscape, driven by growing demand particularly in Asia, ADNOC is forging ties with new partners from around the world, who share our creative vision and are prepared to put skin in the game through capital, technology, and market access."

The expanded approach to partnership is a key element of ADNOC’s 2030 smart growth strategy, focused on growth and opportunity across the upstream and downstream business. ADNOC is on track to increase its crude oil production capacity to 4 million barrels per day (mmbpd) by 2020, and 5mmbpd by 2030, while becoming self-sufficient and eventually a net exporter of natural gas.

In addition, a significant expansion of the downstream business is underway, centred on the Ruwais industrial hub, where substantial foreign direct investment has already been attracted with the aim of creating the world’s largest fully integrated refining and petrochemicals complex.