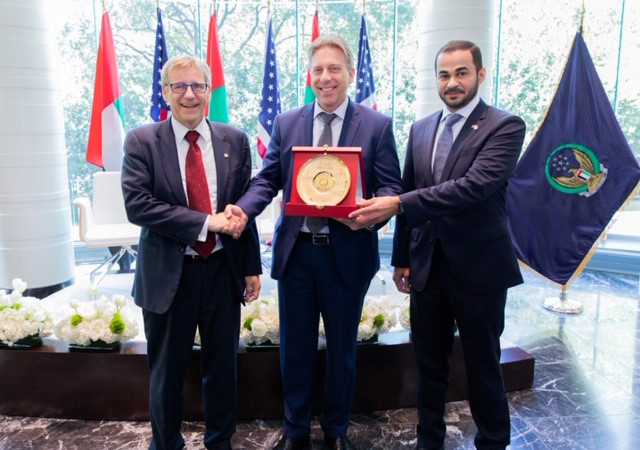 WASHINGTON, D.C., 21st September, 2019 (WAM) -- The United Arab Emirates Police Attache in Washington, DC, Lieutenant Colonel Mohamed bin Juma Alteneiji, hosted yesterday a working lunch for the International Law Enforcement Attaches Association, ILEA. The gathering, which took place at the UAE Embassy, was attended by foreign members of the Association accredited to the United States, representatives of the U.S. Department of Justice, the Federal Bureau of Investigations, FBI, New York Police Department, and the Washington Institute for Near East Policy.

The objective of the meeting was to discuss the means of combatting terrorist groups financing and facing the threat of terrorism and extremism that is increasingly becoming complex in various parts of the world. The paned was moderated by Katherine Bauer, a fellow at Washington Institute for Near East Policy and associate professor at Georgetown University.

Colonel Mohamed Alteneiji noted the important, persistent role of the UAE in combating terrorism, in collaboration with the international community. "Our meeting today convenes at a time when the world is facing increasing threats posed by international terrorism. The ILEA is an effective tool to combat such threats and their financing means," he added.

The ILEA brings together international law enforcement agencies to reduce crime, combat terrorism, and share in knowledge and training. The ILEA academies were established by the U.S. former President Bill Clinton and are administered by the United States Department of State Bureau of Diplomatic Security and Bureau of International Narcotics and Law Enforcement.