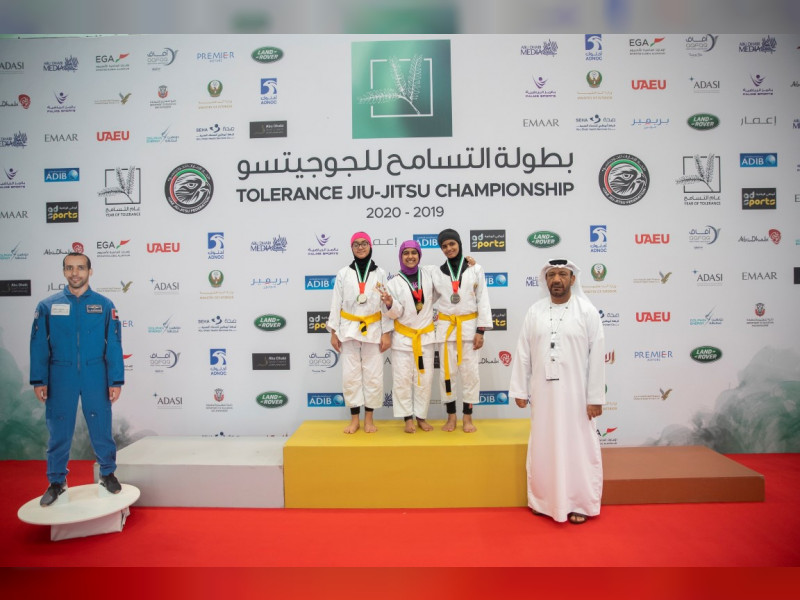 ABU DHABI, 28th September, 2019 (WAM) -- The growing strength and popularity of jiu-jitsu amongst girls in the UAE was evident on Day two of the Tolerance Jiu-Jitsu Championship, with girls aged 10-18 from 35 countries representing 88 clubs, showing commitment, enthusiasm and skill on the mats at the UAE University in Al Ain,UAEU.

"The Tolerance Jiu-Jitsu Championship allowed us to identify a new group of emerging talent from the UAE females athletes who will form the nucleus of the future our UAE national team," said Al Dhaheri.

"We have anticipated that this championship would attract great crowd attendance, but the attendance we witnessed exceeded all expectations. The second day of the Tolerance Jiu-Jitsu Championship provided a unique example of commitment, determination and patience from UAE females athletes to achieve and lead in various sectors" Al Dhaheri added.

Al Dhaheri praised the magnificent presence of families and friends who came from all over the UAE to support their daughters in this championship."

Samira Murshid Al Romaithi', Board member of UAE Jiu-Jitsu Federation, said: "The continuous support from His Highness Sheikh Mohamed bin Zayed Al Nahyan, Crown Prince of Abu Dhabi and Deputy Supreme Commander of the UAE Armed Forces, to the sport of Jiu-Jitsu, lead to the merge of heroes who are determined and responsible to and secure successes and achievements at all levels."

Al Romaithi stressed that the culture of jiu-jitsu and the value of tolerance converge in several aspects.

Hamda Mohamed Ba Madhaf, who captured the gold at the Tolerance Jiu-Jitsu Championship competing in the 40 kg blue belt category and from Al Jazira Club, said: "Winning the gold medal in the Tolerance Championship is a great personal achievement, and a huge step in my career."

"I loved the atmosphere of the competition as it cannot be distinguished from any other major tournament. We are used to UAEJJF using its creativity and innovation to provide their unlimited support to the players, this championship is the best preparation for future tournaments, especially Fujairah International Pro Jiu-Jitsu Championship and Grand Slam in London," added Ba Madhaf.

Hamda Yousef Al Kalbani of Bani Yas Club, winner of the 63 kg gold, said: "This achievement is the result of continuous efforts of training, and working hard with the dedicated training staff. The journey is still long but without a doubt, the Tolerance Jiu-Jitsu Championship has helped me in building my confident and look forward in achieving great results, especially the for next World Jiu-Jitsu Championship in November, hosted by the beloved capital Abu Dhabi.

A large group of players participating in the second day of the championship expressed that the historical mission of UAE’s first astronaut, Hazza Al Mansoori, into space, helped them to think differently broadening their horizons pushing their ambitions so that their goals become international.