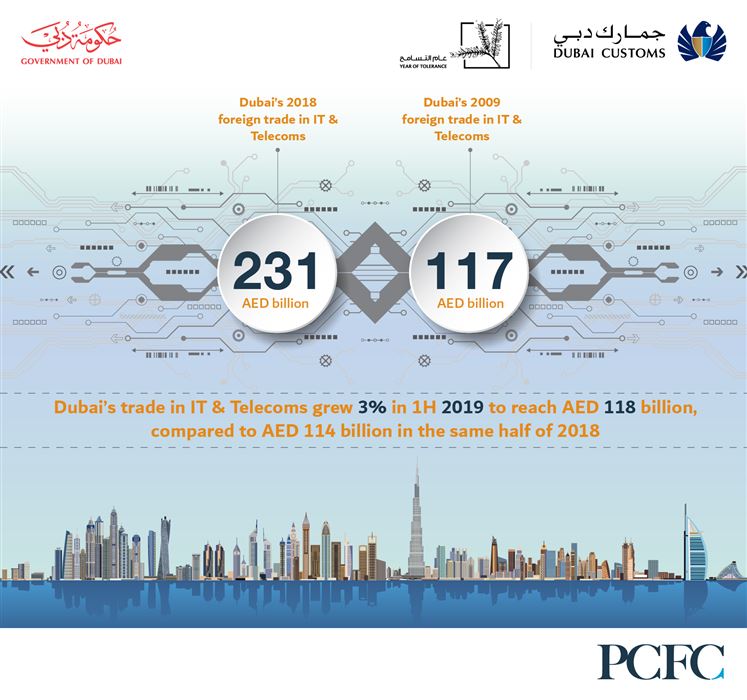 DUBAI, 9th October, 2019 (WAM) -- Dubai almost doubled its foreign trade value in IT and telecom industry over the past decade, recording a growth of 97 percent from AED117 billion in 2009 to AED231 billion in 2018, according to statistics released by Dubai Customs, in conjunction with GITEX Technology Week 2019.

In H1-2019, trade in IT and telecoms went up 3 percent year-on-year to reach AED118 billion compared to AED114 billion in the corresponding half last year. Imports accounted for AED60 billion, exports were up 15 percent to AED875 million, and re-exports up 8 percent to AED57 billion.

China is Dubai’s largest trade partner in IT and telecom market with a share of AED32 billion, followed by Vietnam with AED15 billion worth of trade and Saudi Arabia at AED9 billion.

Smart and cell phones had the lion’s share in Dubai’s foreign trade in IT and telecoms with AED66.6 billion worth of trade. Computers came second at AED9 billion, followed by phone spare parts and accessories at AED2.8 billion, data storage products at AED1.7 billion, and smart TVs at AED1 billion.

"Dubai’s strong trade performance in IT and telecom market is a testament to the pivotal role the emirate is playing as a leading regional and global hub of information and communications technology," said Ahmed Mahboob Musabih, Director-General of Dubai Customs.

Trade in IT and telecoms products is a key component of global trade and a major contributor to wider economic growth worldwide, Musabih added.