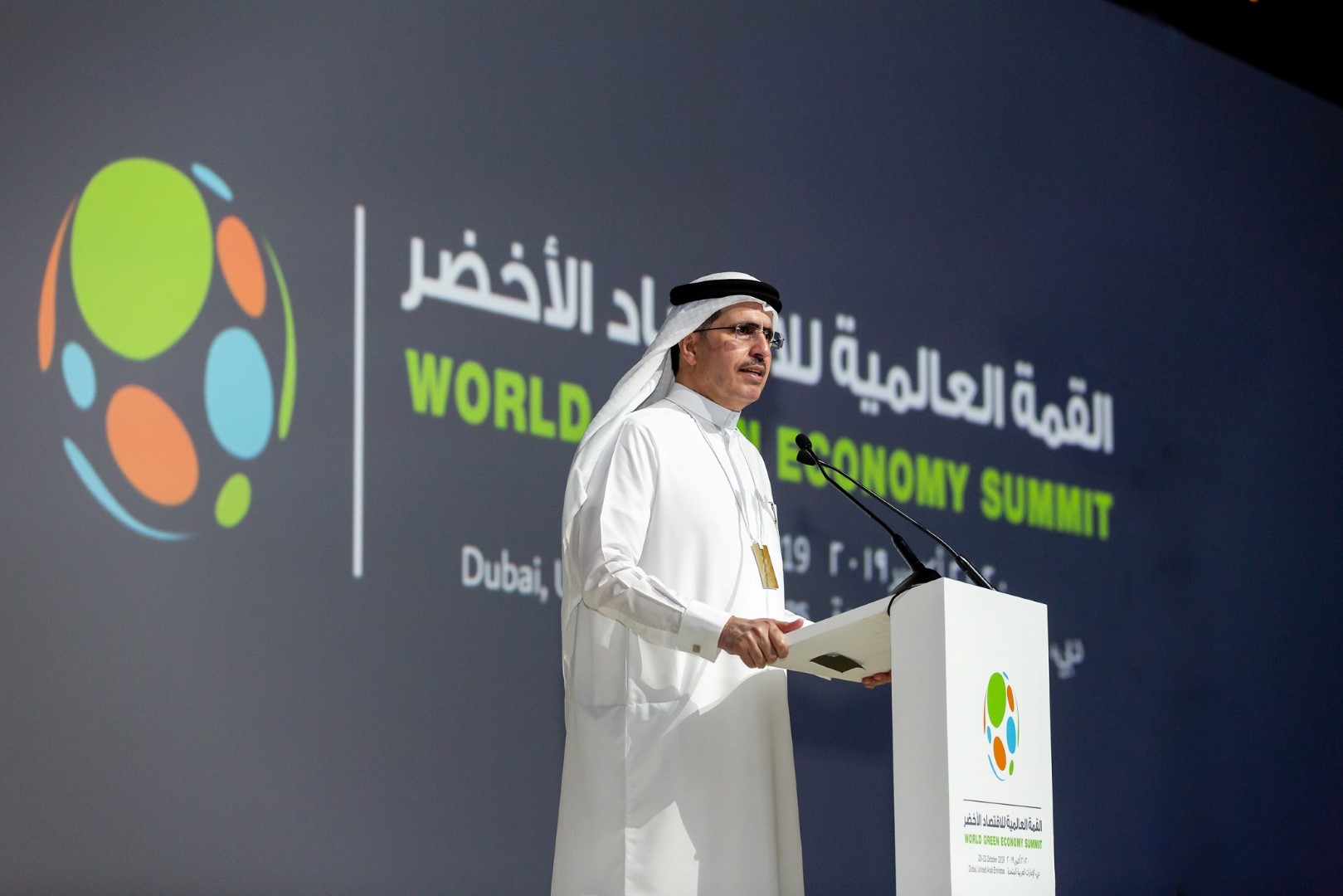 DUBAI, 21st October, 2019 (WAM) -- The 6th World Green Economy Summit,WGES, held under the patronage of His Highness Sheikh Mohammed bin Rashid Al Maktoum, Vice President, Prime Minister and Ruler of Dubai, concluded today. The summit, held under the theme ‘‘Innovative Technologies for a Sustainable Economy’’ brought together many prominent speakers from across the globe, in addition to dignitaries and representatives from government organisations, academicians, experts and the media.

Saeed Mohammed Al Tayer, MD & CEO of Dubai Electricity and Water Authority,DEWA, and Chairman of WGES, announced the Dubai Declaration 2019 at the conclusion of WGES 2019.

Al Tayer said: "While we are concerned by the effects of climate change, we are optimistic, that together we can accelerate the engine of green economy transformation. This Summit is a testament of the same. It focused on the progress made to realise the Sustainable Development Goals,SDGs, 2030. In the UAE, several key initiatives have accelerated the pace of a green economy. Transformational projects such as the creation of solar power plants, adoption of electric cars, digitisation, supporting infrastructure as well as the construction of sustainable, low-carbon urban communities across the UAE demonstrate that the country can continue to achieve progress and lead its initiative to be a global capital of green economy."

"Every year, several new initiatives in the UAE take shape that support effective transition towards a green economy. The launch of Dubai Green Fund was one of our key achievements. This year, the Summit witnessed the introduction of Dubai Sustainable Finance Working Group that will align the local finance sector’s key initiatives concerning the environment in the local and regional markets," Al Tayer added.

He further said: "The Summit also highlighted the importance of international cooperation in addressing global challenges and promoting sustainable development worldwide. The establishment of the Regional Cooperation Centre,RCC, for Middle East and North Africa, as well as hosting of Regional Ministerial Conferences by World Green Economy Organisation,WGEO, on Green Economy to enhance cooperation between the countries of the world is a testament of global efforts to march towards a sustainable future."

Al Tayer added: "WGES 2019 also highlighted the necessity to adopt green innovative solutions, and looked into ways that could spur innovation for sustainable development and economic growth. The UAE has been at the forefront of countries to adopt innovative solutions, and as far as Dubai’s endeavours in innovation are considered, the launch of the first pumped-storage hydroelectric power station at Hatta in the Middle East and North Africa,MENA, is an exemplary model of innovation to power green economy. In this project, water stored in an upper reservoir at the Hatta Dam, will be utilized through pumped storage, a new form of technology with solar-powered pumps.

"In this edition of the Summit, we have reinforced our commitment to strengthen partnerships in advancing innovative solutions, including public-private partnerships, as well as encouraging women and youth to streamline the sustainable journey.

While 2019 was a great edition, the next edition in 2020 will be even larger and bigger, and will be held at the Expo 2020 Dubai site. True to its theme of ‘Connecting Minds, Creating the Future’, the Summit will also foster effective capacity development at all levels and for all stakeholders to transition to a green economy," Al Tayer highlighted.

"On this note, I encourage and urge every nation on our precious planet to join us in mobilising its efforts, exchanging ideas, and strengthening global solidarity, to address climate change," Al Tayer concluded.

Also, during the second day of the conference, Julia Gillard, Former Prime Minister of Australia, delivered a keynote speech, saying, "We are in an era of change that accepts gender equality; however, it is still quite unusual for women to take important positions into areas of leadership, politics, businesses, law, innovation, etc. But I also believe that if a woman makes it through, then she sets profound role model implications for generations to follow."

"Women, just like men are working collaboratively towards a green economy. As much as women’s contribution is important, it is equally imperative to educate them for positive results. As per statistics, if every girl today gets secondary education, population will go down by 2 billion people. I believe the most effective investment to change our climate is to educate girls because educated girls will make a positive difference towards sustainability," she added.

Juan Manuel Santos, Former President of Colombia,also gave a keynote speech, saying: "Columbia has made some important progress during the term (2010-2018). We expanded our protected areas from 12 percent to 27 percent - a real achievement that has not only protected the forests but also increased marine protected areas from 1.2 million to 12.8 million hectares. The country is working on the ambitious Green Agenda 2030. We understand that to achieve green economy requires efforts of multi stakeholders, in addition to qualities as patience, which is crucial for creating necessary conditions and alliances related to environment. To combat the climate change, political support is vital and legislation should be established. It is equally important to educate people on the urgency and putting across the right policies for a sustainable future."