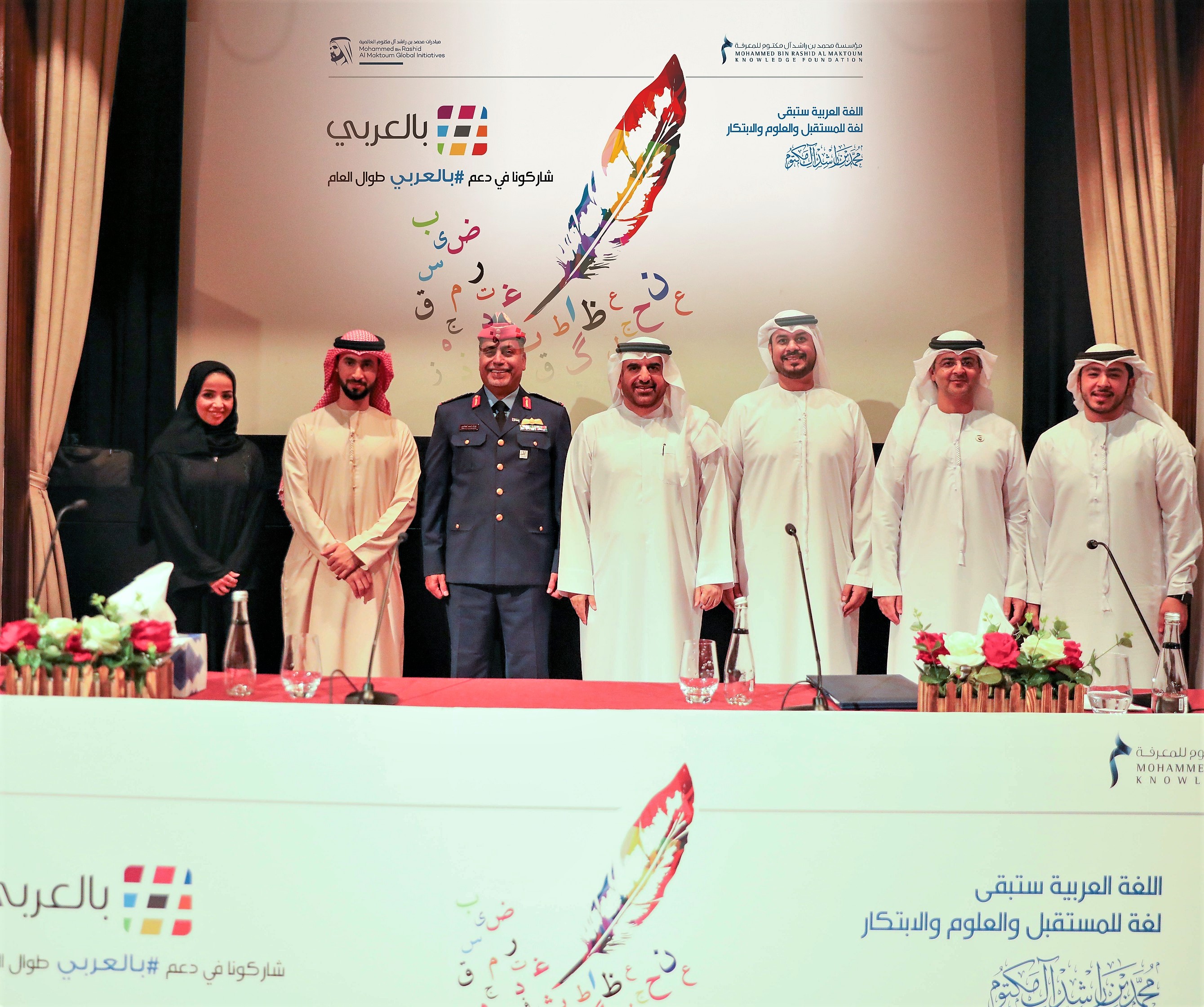 DUBAI, 10th December, 2019 (WAM) -- The Mohammed bin Rashid Al Maktoum Knowledge Foundation, MBRF, has launched the 7th edition of the ‘Bil Arabi’ initiative, which seeks to advance the global status of the Arabic language and encourage its use in everyday communication channels.

The announcement was made in a press conference held today at the foundation's headquarters in Rashid Tower at the Dubai World Trade Centre, and attended by MBRF’s CEO Jamal bin Huwaireb, along with Major General Abdullah Al Hashmi, Assistant Under-Secretary for Support Services at the UAE Ministry of Defence.

Bin Huwaireb said, "Launched in 2014 under the patronage of H.H. Sheikh Ahmed bin Mohammed bin Rashid Al Maktoum, Chairman of MBRF, ‘Bil Arabi’ strives to encourage the use, support, and appreciation of the Arabic language, which has enjoyed unparalleled longevity and continuity. That is what sets our language apart; it has withstood the test of time, persisted as eras and cultures overlapped, and held on to its unique style and aesthetic that has produced literary and scientific masterpieces."

"The initiative began as a simple idea put forth by an ambitious and promising youth," he added. "More than six years later, ‘Bil Arabi’ has captured the hearts of millions from all segments of the community here and abroad. United by their love of the Arabic language and their commitment to preserving it, they took part, year after year, in the initiative’s activities and events around the world."

He asserted that in its seventh year, ‘Bil Arabi’ has set an extensive agenda of events that reflect MBRF’s objectives to promote the use of the Arabic language in everyday life, making it the primary language of communication across all channels.

This year’s events include various activities and contests including the ‘Bil Arabi Competition’, and the ‘Bil Arabi Ambassadors’, set to take place across nine countries, including the UAE, over the course of an entire week from 14th December and until 18th December, 2019 – which has been named Arabic Language Day by the United Nations.

The agenda includes setting up seven booths – equipped with smart screens – in shopping malls on 13th-20th December to organise activities and competitions and interact with audiences in Arabic, where prizes will be allocated to those who interact the most with the hashtag #Bil_Arabi.

UAE embassies across several countries will be taking part in ‘Bil Arabi’ activities, in coordination with the Ministry of Foreign Affairs and International Cooperation. This includes activities in Morocco, Latvia, Kuwait, China, South Korea, Jordan, Singapore, and Bahrain.

Also on the agenda is an activity titled ‘Fusahaa’ Al Arab’, which is a daily radio programme set to begin broadcasting from 15th December on the ‘Sawt Al Arab’ network of Radio Egypt. Each episode of the programme introduces a renowned Arabic linguist to dissect and simplify a word that was used in text or in prose. Additionally, ‘Twitter Panel Discussions’ will be held, exploring a wide array of relevant subjects.

This year’s edition of the initiative will see the launch of the ‘Bil Arabi Best Idea Contest’, which calls on audiences to come up with innovative ideas to improve and promote the initiative. The winning proposition will be announced on the ‘Bil Arabi’ social media accounts and later implemented.