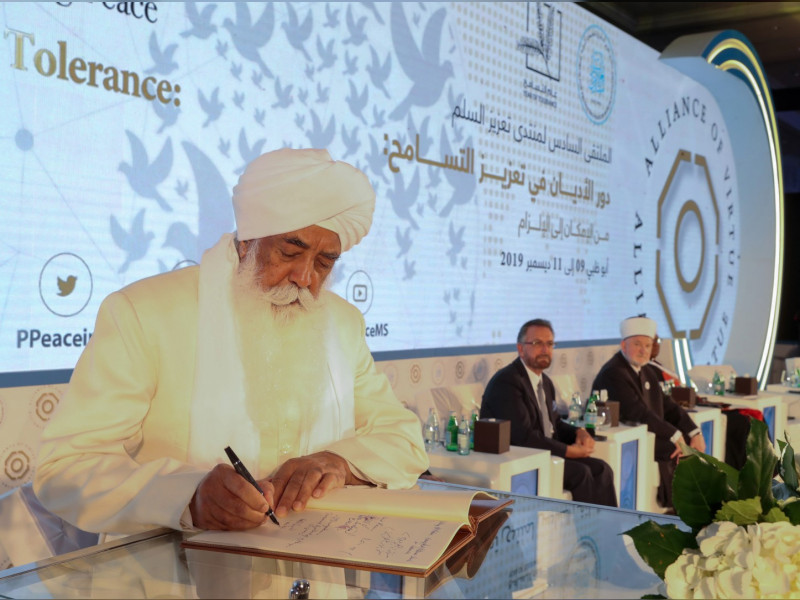 ABU DHABI, 10th December, 2019 (WAM) -- A group of the world’s most respected Islamic scholars, faith leaders joined by experts from governments, and representatives of civil society organisations signed today a new charter to build global peace, based on tolerance and religious freedom.

Launched and endorsed during the final day of the sixth Assembly of the Forum for Promoting Peace in Muslim Societies in Abu Dhabi, the "New Alliance of Virtue", aims to elevate religious freedom, cooperation, and tolerance from mere possibilities to necessary ethical commitments and legal obligations, especially in relation to the protection of places of worship whose attacks have threatened freedom of religion in many parts of the world. This initiative draws direct inspiration from the earliest traditions of Islam.

Following is the full text of the Charter.

Preamble The signatories of this Alliance, Affirming the shared values of the Abrahamic faiths, as well as the rights with which all human beings are naturally endowed; Asserting that religions of the Abrahamic family have common and distinct theological and ethical traditions, each of which values human virtues, and each of which requires peace and mutual respect and tolerance in order to flourish; Asserting that collaboration between people of all religious faiths or beliefs provides an effective vehicle to strengthen the foundations of peace in the world; Asserting that an alliance among people of all faiths, each drawing upon his or her respective tradition to elevate the virtues conducive to respect, tolerance, and peace, can help extinguish the flames of war and defeat the agents of terror and conflict; Recalling that in important instances the institution of accords and charters, historically, have had great impact upon international relations and the establishment of peace, justice, liberty, and tolerance; Recalling that among such accords historically was the Alliance of Virtue, which was convened in 7th century Mecca; Recalling that another such accord was the Universal Declaration of Human Rights, which was promulgated in 1948; Considering the current state of global affairs, and recalling that religion continues to play a vital role in global governance and cultural diplomacy, there is a dire need for a 21st Century Alliance of Virtue; Building upon international law and the resolutions of the United Nations; Building upon the Amman Message (Nov 2004), the "Common Word" open letter (Oct 2007), the Marrakesh Declaration for the Rights of Religious Minorities in Muslim-Majority Lands (Jan 2016), the Washington Declaration of the Alliance of Virtue for the Common Good (Feb. 218), Human Fraternity Declaration (Feb.2019), Makkah Declaration (May 2019), and; Acknowledging the Roman Catholic Church’s Declaration of Religious Freedom which laid the foundation for the Roman Catholic Church to recognize religious freedom for other people based on human dignity; Acknowledging also other declarations affirming the values expressed in this Charter and their importance in various religious traditions and denominations; Inspired by the American Peace Caravan in Abu Dhabi (May 2017), Rabat (Oct 2017), and the numerous conferences in which the Forum for Promoting Peace in Muslim societies has participated; Considering the recommendations from the five annual assemblies of the Forum for Promoting Peace (2014-2018), which inspired the New Alliance of Virtue; Hereby endorse The Charter of a New Alliance of Virtue.

Section one, definitions and scope Article 1 - Definitions This Charter includes the following terms: 1. Alliance of Virtue refers, from the Islamic perspective, to the pre-Islamic pact that was founded on virtue, honorable character, and the noble values held in common among the human family regardless of tribal, ethnic, or religious affiliation.

2. New Alliance of Virtue refers to the covenant detailed in this Charter; it calls for the elevation of virtues as understood by the three Abrahamic religions in the service of peace, tolerance, and mutual understanding between all people irrespective of race, ethnicity, or religion.

3. Abrahamic Family refers to the Jewish, Christian, and Muslim faiths, but lifts up values shared by so many of the world’s faith traditions.

4. Strands of virtue refers to those people who hold on to the shared values of humanity, and who love peace, justice, tolerance, and respect for all people.

5. Rights: There are at least two ways to conceptualize human rights. One is rights created by governments, which are of most value when they apply to all and reflect norms of human dignity and justice. Another is rights that exist prior to the state and inhere in each human being by virtue of his or her existence. Such rights are typically understood as deriving from a greater-than-human source, such as God or nature, for the believer or non-believer. These rights must be acknowledged and protected by any just state. They should be understood as necessary to human dignity, as well as social flourishing.

6. Values: Values have two dimensions: personal virtues, such as mercy and altruism, and civic virtues, such as hospitality, neighborliness, solidarity, and aid to those in need. Societies should foster both dimensions and organize societies in accordance with such humanitarian values.

Note: The definitions above are not necessarily the significations of the terms as they are used in other contexts.

Article 2 - Scope 1. The signatories of this Charter, whether from the Abrahamic Family or other belief traditions, commit themselves to live by the values contained herein.

2. Nothing in this Charter violates the authority of nations, nor does it contravene their observed laws consistent with ARTICLE 29 of the Universal Declaration on Human Rights.

Section Two, Motivations Article 3 The motivations for the New Alliance of Virtue include: 1. The increasing cases around the world regarding religious persecution and discrimination on the basis of religion or belief, and attacks on places of worship, as noted in the resolution adopted by the UN Human Rights Council on "Combating intolerance, negative stereotyping, stigmatization, discrimination, incitement to violence and violence against persons, based on religion or belief," (A/HRC/RES/16/18, 2011).

2. The false accusation that religion qua religion is inherently violent and thus responsible for the phenomenon of terrorism. Violent extremist and intolerant forms of religion threaten freely-embraced and freely-exercised religion.

3. The conviction that we indeed have shared values -- universals that transcend culture, era, or region -- and that they must be actualized. The shared values of the Abrahamic religions include, in particular, faith, kindness, prudence, and a belief in universal human dignity.

4. Existential angst resulting from: the modern loss of transcendence, a development model whose materialist premises ignores the needs and moral well-being of the world’s inhabitants, and the proliferation of weapons of mass destruction.

5. Globalization, with the resultant tension between a globalized reality dominated by standardization, the hegemony of secularism, and consumerism and the provincialism of customs and beliefs of many societies grappling with the new conditions.

6. A technocratic mentality that greatly influences technological advancements, some of which, rather than being applied for the betterment of humankind, have the potential for immoral applications that may violate human dignity and may disrupt the ecological balance.

7. Economics divorced of a moral framework, as well as the uncoupling of homo economicus from homo religious, thereby replacing the human and spiritual with the corporeal and material.

Section Three, Principles Article 4 The New Alliance of Virtue is built upon the following principles: 1. Human Dignity All people, irrespective of their diverse races, religions, languages, and ethnicities, by virtue of the divine soul breathed into them, are endowed with dignity by their Omnipotent Creator.

2. Freedom of Conscience and Religion or Belief There is no compulsion in religion or belief people have the right to choose their beliefs and to practice their faith without fear of persecution.

It is the responsibility of the state to protect religious freedom, including diversity of religions, which guarantees justice and equality among all members of society.

3. Tolerance The beliefs of others must be legally protected and culturally respected; differences should be seen as a source of enrichment, not conflict.

4. Justice Justice and equity are the foundation of all human interaction, while charity towards others remains the more virtuous and fitting path.

5. Peace Except for self-defense or the defense of innocents, violence should be rejected, whether on the individual or state level (war), and an adherence to all peaceful means to resolve conflicts among individuals or groups maintained.

6. Mercy Mercy is the central means to achieve the divine covenant of faith, truth, and charity: "Whoever shows no mercy to others deprives himself of God’s mercy to him." "God shows mercy to those who are merciful."

7. Kindness Such kindness toward others should make no distinction between kith, kin, or strangers, whether the deeds resulted from familial bonds or selfless concern for others.

8. Keeping Covenants The most consequential of duties is that of fulfilling contracts and covenants, as it assures security and social harmony.

9. Solidarity Solidarity expresses an existential identification with and commitment to the well-being of the other.

Section Four, Objectives Article 5 Enlisting religious leaders in promoting peace and Sakinah In light of the principles above, it is a duty for religious leaders to work to spread and secure peace and Sakinah (tranquility) through the following: 1. Cooperation between the adherents of the Abrahamic Family and people of other faith backgrounds and beliefs from our extended human family.

2. Standing against extremism, violence, and any discourse of incitement and bigotry.

3. Promoting a conciliatory approach in every faith community so that mutual respect may be strengthened in all of its various dimensions.

Article 6 Positive and accountable citizenship Citizenship is both beneficial and a civic duty when: 1. It is predicated upon liberty, equality, pluralism, and mutual respect.

2. The exercise of rights is consistent with the protection of social harmony and the preservation of public order in accordance with ARTICLE 29 of the Universal Declaration of Human Rights.

3. It promotes non-violence and a culture of social solidarity in confronting societal challenges that arise.

Article 7 Encouraging people of all faiths to respect each other At its base, respect for another's religion is respect for human dignity. Human beings are by their nature truth seekers. When they believe they have discovered religious truth, they deserve -- by virtue of their humanity -- the respect of their fellow human beings. As such, respect for another's religion is a primary virtue that supports both individual human flourishing and the common good.

In practice, respect for other religions entails: 1. Protecting the sacred symbols and religious sensibilities of other faith traditions.

2. Respect for other religions does not preclude honest dialogue about what is perceived to be true or false in other religions, including one’s own.

2. They constitute an important means to promote peaceful cooperation between nations with their varying political, social, and economic systems.

3. They embody the concept of "contractual" citizenship that is central to this Charter.

Section Five Domains & Means With respect to working to improve the human condition, there are many domains in which the New Alliance of Virtue can contribute. This can be done by utilizing some of the means listed below.

Article 10 The domain of the family By restoring the importance of the family as the true starting point for fostering virtue, justice, peace, civility, and tolerance.

Article 11 The domain of education This would entail: 1. Advocating that character development and education are inseparable, and that pedagogical methods should incorporate ethical frameworks. In this way, both individual and societal comportment will be refined.

2. Advocating that religious education be reformed and developed to keep pace with modern developments in other fields, including, for example, as discussed in the 2009 Abu Dhabi Guidelines on Teaching Interfaith Tolerance.

Article 12 The domain of humanitarian work This would entail: 1. Promoting and propagating the virtues of hospitality, good Samaritanism, sheltering refugees and immigrants, lifting up the poor, alleviating hunger and suffering, protecting the vulnerable, providing necessary care, and helping anyone in need wherever and whoever they may be.

2. Advocating for an escalation of humanitarian efforts, such as alleviating hunger.

Section Six Closing Remarks Article 14 Signatories All who affirm the above ARTICLEs are hereby called to sign onto and join the New Alliance of Virtue.

Article 15 Clauses & Amendments All signatories of this Charter are granted the right to submit reservations to any of its ARTICLEs.

Article 16 Official Languages This Charter was ratified in the Arabic and English languages. All other languages must rely on these versions.

Article 17 Execution This Charter will be executed.