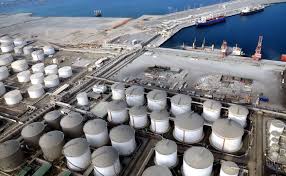 Light distillates -- including gasoline and naphtha -- slipped 15 percent to 6.007 million barrels, the lowest since 13th January.

Heavy distillates and residues was the only category to show an increase, gaining one percent to 13.314 million barrels. The category includes fuels used for marine bunkers and power generation.

The tail end of refinery maintenance in the Middle East may still contribute to falling stockpiles, according to Alex Yap, Senior Analyst at S&P Global Platts Analytics in Singapore. In addition, supplies may be hampered for the next few months as Saudi Arabia focuses on boosting crude exports, rather than refinery runs, he said.

The three-year OPEC production cut pact with Russia and other allies collapsed on 6th March. Prior to this, the Kingdom's exports of refined products in January slumped to the lowest since July 2014, according to latest data by the Joint Organisations Data Initiative. The JODI database is maintained by the Riyadh-based International Energy Forum.

Platts holds exclusive rights to publish Fujairah oil inventory data, and has deployed a blockchain network for its collation.