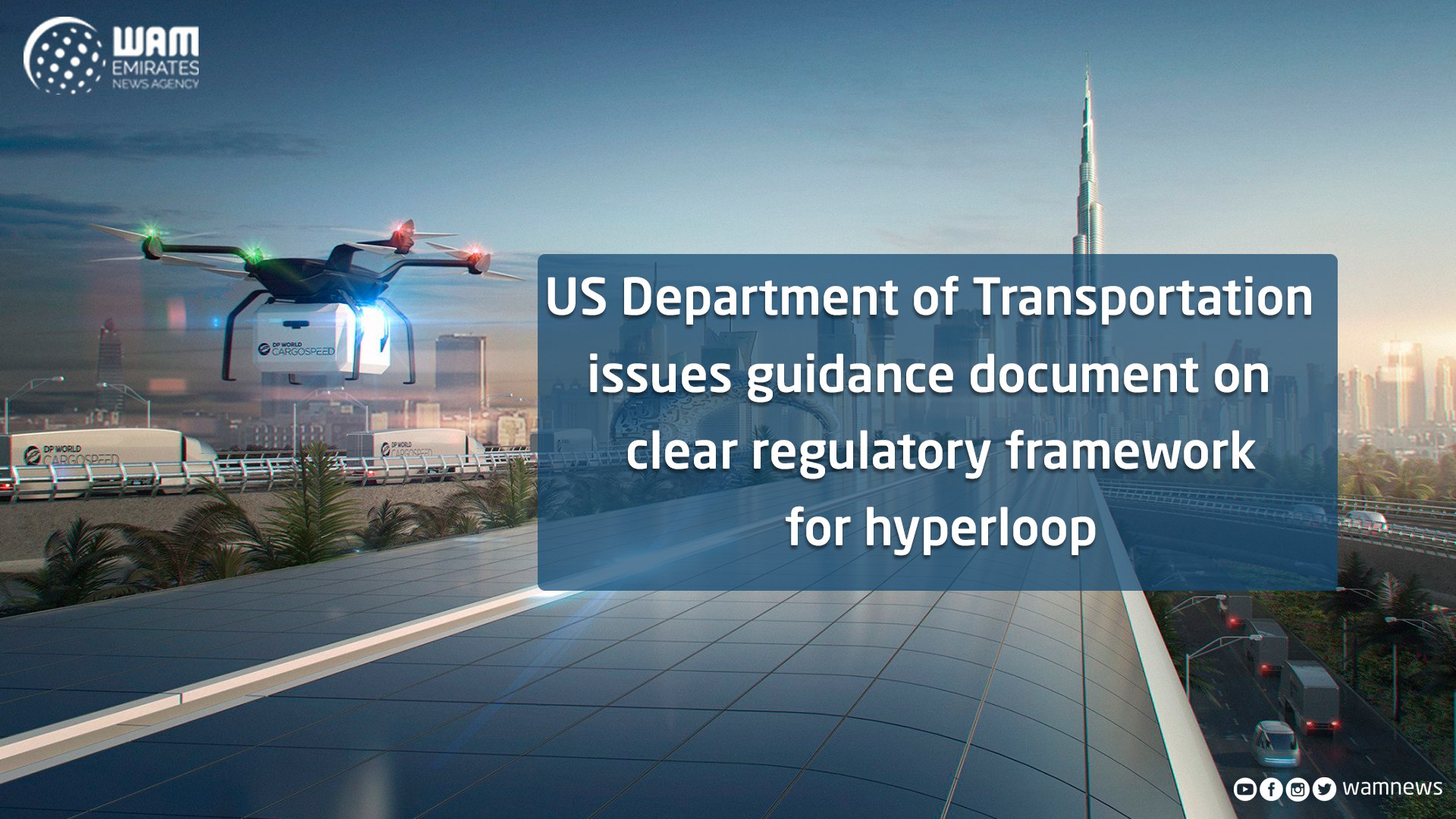 DUBAI, 27th July, 2020 (WAM) -- Hyperloop has taken yet another step towards reality with the US Department of Transportation announcing that projects will be eligible for Federal grants and loans.

It comes after the US Department of Transportation and the Non-Traditional and Emerging Transportation Technology, NETT, Council issued a guidance document on a clear regulatory framework for hyperloop in the United States.

"This guidance bridges the gap between innovator and regulator, prioritises safety during development without hampering innovation, and promotes mutual awareness between industry and government," said USDOT Secretary Elaine Chao during a live-streamed event.

Virgin Hyperloop, of which DP World is the single largest investor, is the category leader in the development of hyperloop technology and the only organisation to have successfully tested hyperloop at scale. The system moves pods at high speed through tubes in near vacuum conditions, using electromagnetic propulsion and electromagnetic levitation. Once realised, hyperloop will be the first and most sustainable new mode of mass transportation in over a century.

The regulatory guidance document came months ahead of schedule and is the first of its kind in the world. In the United States, Virgin Hyperloop has been working closely with the NETT Council over the last year and a half to advance the technology and to ensure that it can deploy hyperloop safely and quickly.

"We have determined that these hyperloop projects are just as eligible for grant as any maglev or magnetic levitation project," said Finch Fulton, Deputy Assistant Secretary for Transportation Policy during the live-streamed event. "This includes the Federal Railroad Administration Consolidated Rail Infrastructure and Safety Improvements, CRISI, Programme, the Office of the Secretary BUILD and INFRA grants, and programmes of that sort. This also means that they would be eligible for some of the Department’s loan and lending programmes."

Commenting on the announcement, Sultan bin Sulayem, Group Chairman and CEO of DP World and Chairman of Virgin Hyperloop, said, "The technology is advancing rapidly to build the first operational hyperloop system linking cities. We welcome the US Government’s announcements which demonstrate increasing confidence that Hyperloop has the potential to revolutionise mass-transportation.

"Our objective at DP World with our partner Virgin Hyperloop is to lead the way in hyperloop and to make the UAE a global hub for the development of the technology."

Virgin Hyperloop has also been engaging with governments in the region including the UAE, Saudi Arabia and India.

In Saudi Arabia, Virgin Hyperloop recently partnered with the Ministry of Transport to carry out the world’s first hyperloop study at a national level, including a route between Dammam and Jubail in the Eastern Province. In the UAE, Virgin Hyperloop has recently signed a Memorandum of Understanding with Abu Dhabi’s Mohamed bin Zayed University of Artificial Intelligence to collaborate on research and development.