World media hails ‘historic’ announcement by US, UAE and Israel 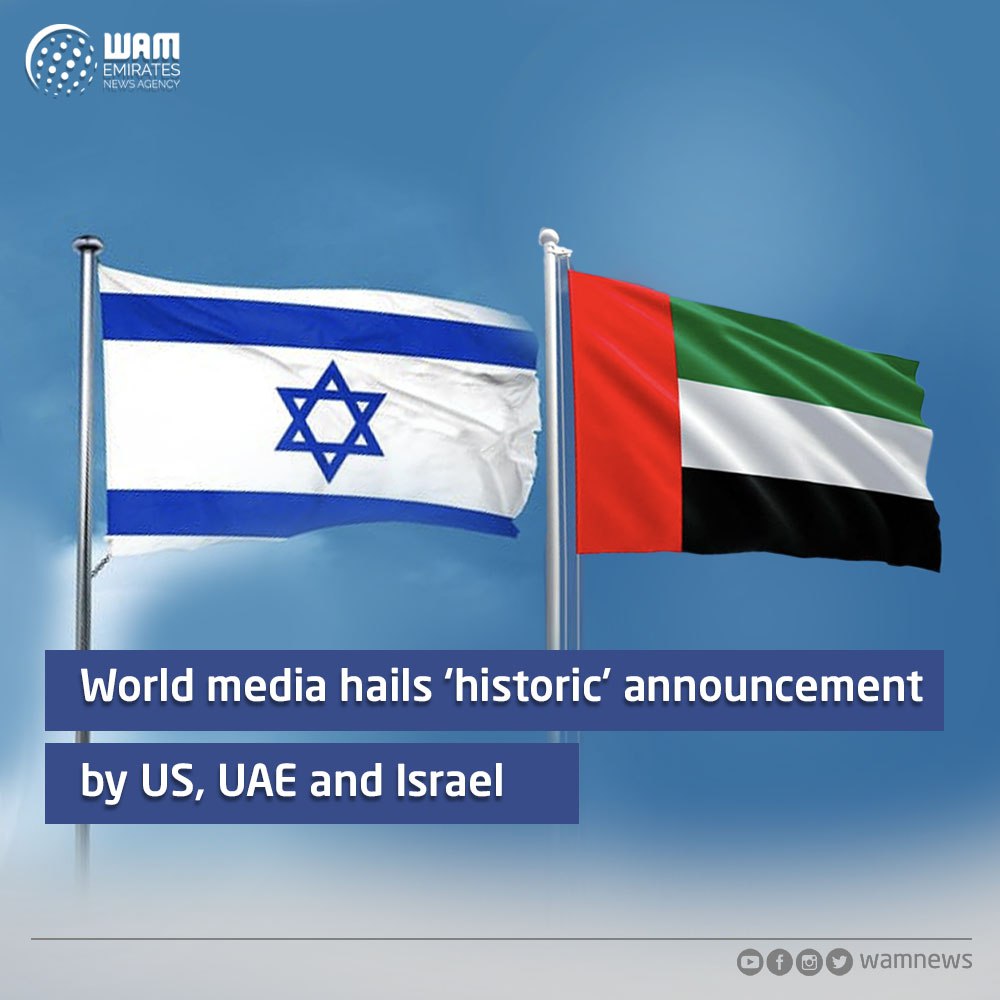 ABU DHABI, 14th August 2020 (WAM) - The world media hailed the historic statement by the United States, the United Arab Emirates and Israel on suspending Israeli annexation of Palestinian territories as a positive step on the road to a just and lasting peace in the Middle East.

We don’t hear many good news stories out of the Middle East, particularly recently, in the midst of the despair over Beirut, regional conflicts and the ravages of COVID-19, wrote Dennis Ross, a former special assistant to the US President, in a commentary published by the Washington Post.

But on Thursday, he continued, "there was a hopeful development: President Trump announced a historic peace agreement that will normalise relations between the United Arab Emirates and Israel."

"It’s clear this was the only way to stop Israel’s annexation of the territories in the West Bank allotted to it in the Trump plan," he added.

Thomas L. Friedman, a renowned columnist of the New York Times, said that the agreement brokered by the Trump administration for the United Arab Emirates to establish full normalisation of relations with Israel, in return for Israel forgoing, for now, any annexation of the West Bank, was exactly what Trump said in his tweet, a "huge breakthrough."

Jonathan Marcus, the BBC Defence Correspondent, praised the agreement as "a significant step."

"The establishment of full diplomatic relations; the exchange of embassies; and normal trade ties between Israel and the UAE is a significant diplomatic step forward," he said.

He went on to say, "For the UAE, it is harder to say precisely what the immediate benefits are, though its relations with Washington will be strengthened and the deal with Israel may yield significant economic, security and scientific benefits."

He added, "Overall, this is an agreement that potentially could offer both more and less than might first appear."

Fox News welcomed the development by saying that Thursday’s announcement of a "historic peace agreement" brokered by the US is another evidence that Donald Trump is the first president in a long time to get US Middle East policy more right than wrong.

The Associated Press highlighted the statement by the US Presidential candidate Joe Biden in which he praised the Israeli freezing of the annexation plan as a result of the agreement.

"The United Arab Emirates and Israel have pointed a path toward a more peaceful, stable Middle East," Biden said.

The NBC News said the deal achieves a Middle East rarity, describing it as a win-win-win for all parties involved, mostly the Palestinians.

A commentary published on the TV network’s website said, "The most immediate plus is the removal of annexation from the agenda. Though Palestinian diplomacy (with help from Jordan, Egypt and other Arab and European countries) managed to create an international consensus against annexation, the threat remained palpable given that the Trump administration remained open to the idea and Netanyahu continued to see it as politically necessary."

It added, "Now, Israel has committed to indefinitely freeze annexation a commitment it made not only to the UAE but, more importantly, to Trump."

The UK’s Telegraph said in an editorial that this win for Donald Trump is a win for the Middle East.