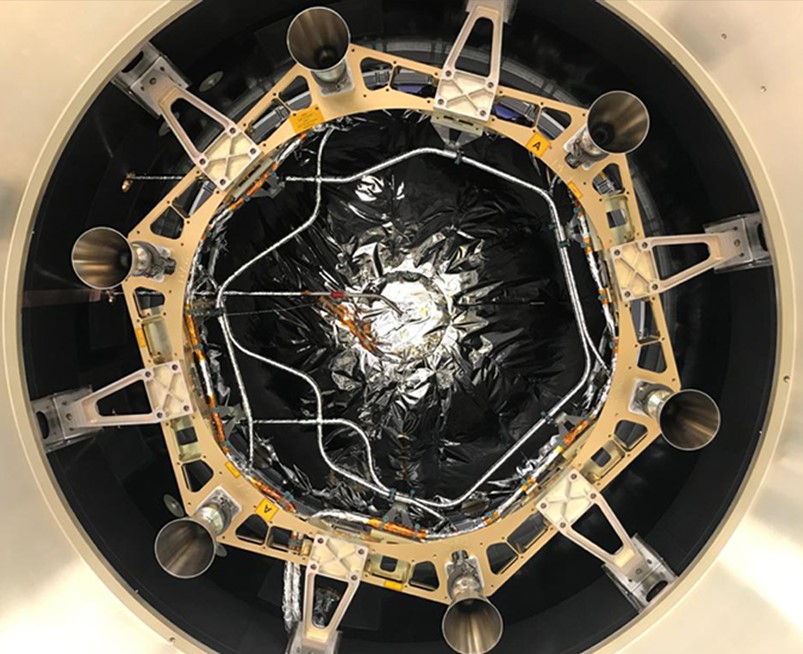 ABU DHABI, 17th August, 2020 (WAM) -- The Emirates Mars Mission, EMM, the first interplanetary mission undertaken by an Arab nation, today announced the successful completion of TCM1 – its first trajectory correction manoeuvre and a major milestone for the mission as the Mars Hope probe continues its 7-month journey to Mars.

The manoeuvre marks the first firing of the Mars Hope probe’s six Delta-V thrusters, which were deployed for the first time in the vital course correction that will now see the probe directly targeting its Mars capture orbit. "TCM1 was a major milestone for us, not only because it is the first time we have deployed the spacecraft’s Delta-V thrusters, but also because it defines our path to cruise Mars," said EMM Project Director Omran Sharaf.

Following the successful launch from the Tanegashima Space Centre in southwestern Japan on the 20th July, the Mars Hope probe will make some 7 TCMs in its 493 million Km journey to Mars. The performance of the launcher and spacecraft during the Launch and Early Operations Phase, LEOPs, has achieved an outstandingly accurate trajectory. "Hope has exceeded our expectations and is now on target to reach its Mars Orbit Insertion, MOI, requiring less adjustment to its course than we had originally planned."

In order to meet planetary protection protocols, Mars and other planetary missions are typically launched on an initial flight path that is intended to ‘miss’ the mission’s planetary target until tests have confirmed the spacecraft is performing nominally, thereby mitigating the chance of an unplanned crash on the planetary surface and subsequent potential contamination with Earth-originating pathogens. For this and flight planning reasons, trajectory control manoeuvres are performed during flight.

MOI is scheduled to take place early in February 2021. Hope aims to build the first full picture of Mars’ climate throughout the Martian year.

EMM and the Hope probe are the culmination of a knowledge transfer and development effort started in 2006, which has seen Emirati engineers working with partners around the world to develop the UAE’s spacecraft design, engineering and manufacturing capabilities. It is part of a long-term integrated effort to create economic opportunity around leadership in space sciences, research and exploration. The mission’s probe was named Mars Hope as a symbol of hope for all young Arabs.

The Emirates Mars Mission is part of a long-term integrated effort to create economic opportunity around leadership in space sciences, research and exploration.

Mars Hope is a fully autonomous spacecraft, carrying three instruments to measure Mars’ atmosphere. Weighing some 1,350 kg, and approximately the size of a small SUV, the spacecraft was designed and developed by MBRSC engineers working with academic partners, including LASP at the University of Colorado, Boulder; Arizona State University and the University of California, Berkeley.

Hope’s mission is focused on atmospheric dynamics. It will explore the atmosphere of Mars globally while sampling both diurnal (daily) and seasonal timescales. (Never been done by any previous Mars mission). Understanding atmospheres of other planets, allows us to better understand our own planet (since there is another sample to compare with) and better understand other planets in the universe.

Its unique science orbit supports the first complete picture of Mars’ weather. For the first time, scientists based in over 200 universities and research institutes globally will have access to a holistic view of the Martian atmosphere at different times of the day, through different seasons.

The Emirates Mars Mission was developed by the Mohammed bin Rashid Space Centre working in conjunction with its knowledge transfer partners and funded by the UAE Space Agency.