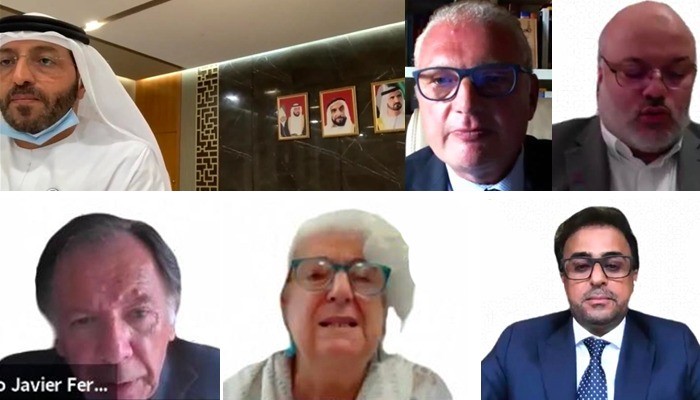 MADRID, 16th September, 2020 (WAM) -- The Foundation for Islamic Culture and Religious Tolerance in Spain has held a virtual cultural seminar on Monday, titled, "The Abrahamic Family: Peace and Communication," with the participation of leading scholars who discussed the role of peace and coexistence between different religions in serving mankind.

Alfred Gutiérrez-Kavanagh, President of the Foundation, moderated the seminar.

While presenting an academic paper, entitled "The UAE-Israel Peace Accord in light of the Prophet’s Accords," Dr. Mohammed Mattar Al Kaabi, Chairman of the General Authority of Islamic Affairs and Endowments, stated that the signing of the peace accord between the UAE and Israel is a courageous strategic decision based on the noble values of Islam, and accords have been ways of achieving peace since of era of the Prophet Mohammed, PBUH, while noting examples of peace accords signed by the Prophet with Jews and those from other religions.

He said that scholars have identified two key conditions in the Prophet’s accords. Firstly, it is up to the Ruler to decide and, secondly, everyone’s interests must be taken into account, he added.

Dr. Al Kaabi also highlighted the UAE’s efforts to achieve fair and comprehensive peace, which have reinforced its prominent stature while affirming that since its establishment by the late Sheikh Zayed bin Sultan Al Nahyan, the UAE has been known for its peace initiatives in the region and rest of the world.

Mohamed Ajana Al-Wafi, Secretary-General of the Islamic Commission in Spain, presented an academic paper, titled, "Peace Accords and their Role in Achieving Coexistence and Cultural Interaction," which highlighted Spain’s religious and cultural pluralism and called on everyone to understand Islam correctly to achieve peaceful coexistence with others.