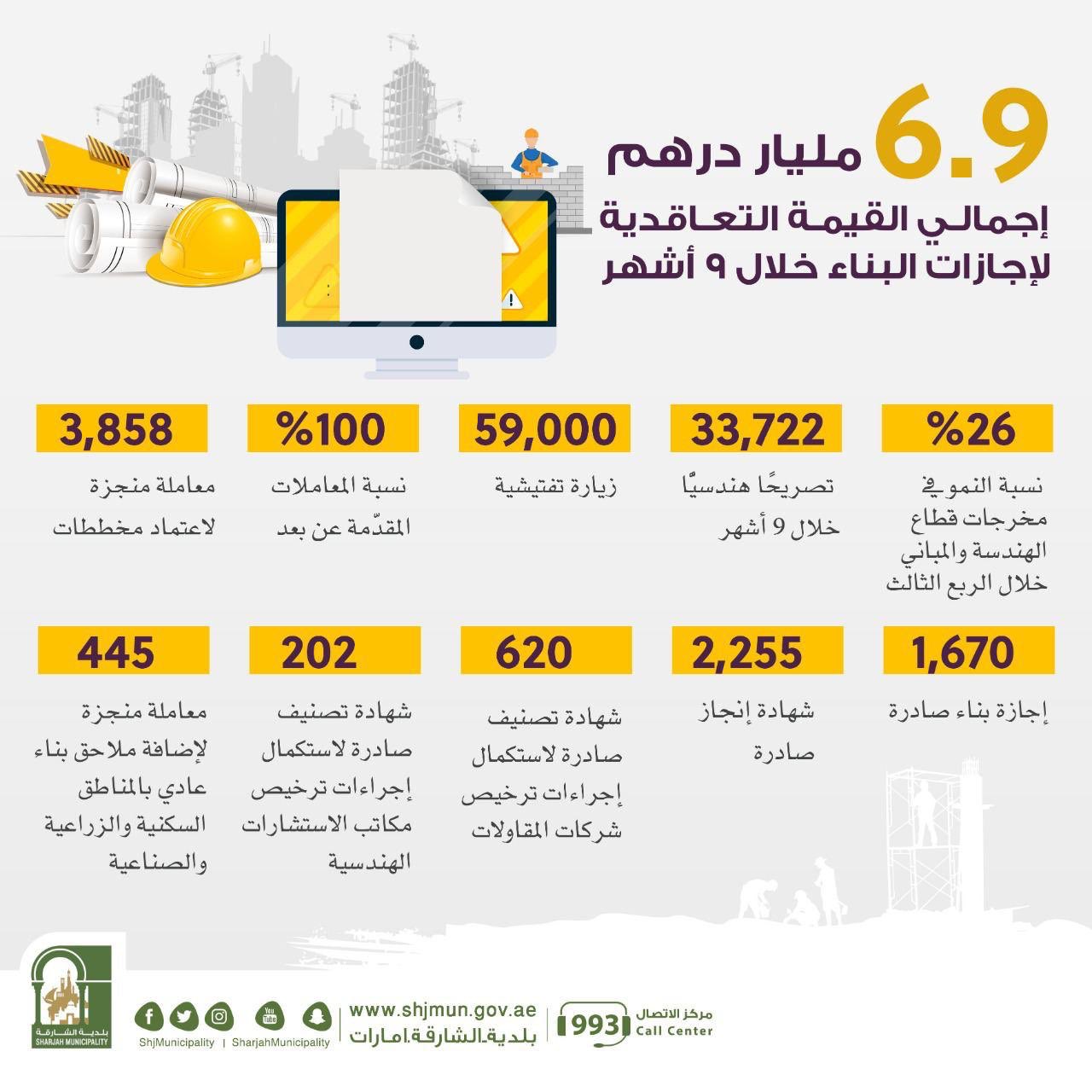 SHARJAH, 18th October, 2020 (WAM) -- Sharjah Municipality, SM, announced that the contractual value of construction permits issued in the city of Sharjah since the beginning of this year until the end of September amounted to approximately AED6.9 billion, and the engineering and buildings sector outputs witnessed a remarkable increase of 26 percent during the third quarter compared to the second quarter of this year.

Thabet Al Tarifi, Director General of the Sharjah Municipality, stressed that the emirate is an ideal destination for attracting investors and businessmen because of the advanced facilities and services it provides and the infrastructure, thanks to the insights and guidance of H.H. Dr. Sheikh Sultan bin Muhammad Al Qasimi, Supreme Council Member and Ruler of Sharjah.

Eng. Khalifa bin Hada Al Suwaidi, Assistant Director General of the Engineering and Building Sector, confirmed that the sector has achieved many achievements during the current year in various fields, as the contractual value of construction permits issued during the 9 months of this year reached about AED6.9 billion in Sharjah. This period of the year, 33,722 engineering permits were issued, and more than 59,000 inspection visits were organised to various regions of Sharjah. The sector’s outputs witnessed a remarkable increase of 26% during the third quarter compared to the second quarter of this year.

Eng. Khalifa bin Hada Al Suwaidi noted that the Building Control Department at the Engineering Department issued during the past 9 months 2,255 transactions for completion certificates with a growth rate of 69 percent compared to the same period last year, and the electronic service also witnessed a turnout from construction contracting companies, where 71 transactions were submitted, and the issuance of 153 permits, in commercial and industrial areas, and the implementation of 27 inspection campaigns for construction projects, while the Maintenance and Demolition Department issued 130 maintenance permits and 63 demolition permits.

The Building Inspection Department completed 445 transactions to add regular building annexes in residential, agricultural and industrial areas, as well as issued 559 decorative permits for commercial and industrial shops, and received 508 improvement opportunities through the call center.