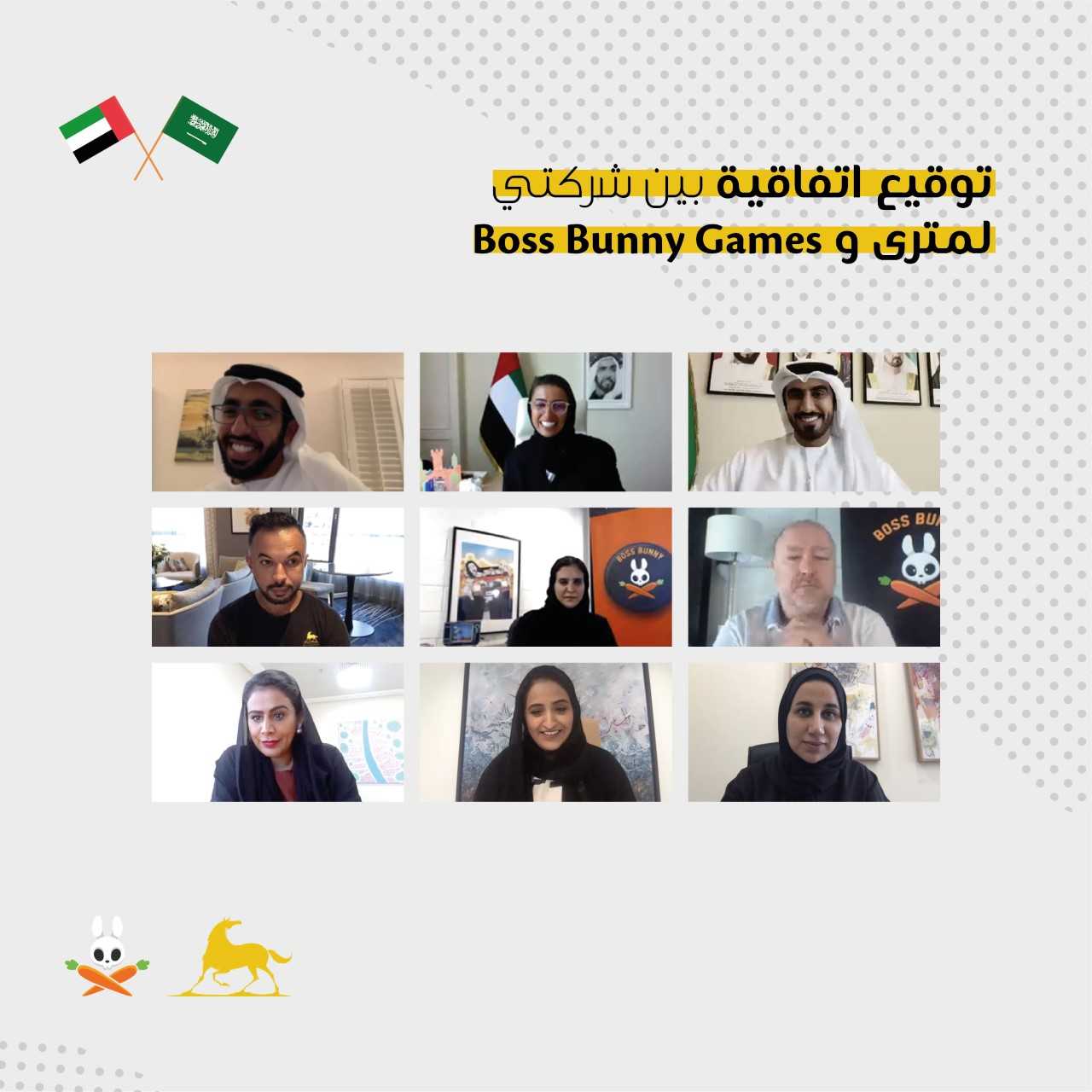 DUBAI, 23rd November, 2020 (WAM) -- In a significant development which will contribute to establish a model to stimulate further investments in the growing games industry, UAE-based Saudi venture BossBunny Games signed an agreement with reputed Emirati production studio Lammtara to develop and publish electronic games inspired by the works of Lammtara, beginning with the popular series Freej.

The announcement was made in the presence of Noura bint Mohammed Al Kaabi, Cabinet Member and Minister of Culture and Youth, and Sheikh Shakhbout bin Nahyan, the UAE Ambassador to the Kingdom of Saudi Arabia.

This unique bilateral partnership will strengthen the Saudi-UAE economic cooperation and help acquire a share of the Gulf region in digital technologies, especially in digital games. The partnership will act as a catalyst for the entire digital sector. With rapid technological advancements, it will transform the Middle East region to become a frontrunner in developing electronic games for a global audience.

Commenting on this strategic partnership, Noura Al Kaabi, said, "Electronic games have become one of the most rapidly emerging creative industries and contribute to massive investments which lead to great economic development for countries. These are sustainable sectors with continued growth potential at an accelerated pace year-after-year. Both the UAE and Saudi Arabia possess young creative talents and great capabilities in the electronic games industry, and with such developments these will further expand the region’s reach and positive influence."

"We welcome this partnership as it offers strong prospects to empower university talent and groom them in the field of innovation, production and design to become future entrepreneurs. Our dream is to see them propagate local culture and heritage to an international audience," she added.

Noura Al Kaabi further emphasised that the UAE has an integrated technology ecosystem, a transparent and progressive legislative environment, and attractive incentives to attract the best of global talent and enterprise to launch their creative projects from the UAE.

On this occasion, the UAE Ambassador to Saudi Arabia Sheikh Shakhbout, said, "Saudi Arabia and the UAE have built a formidable model of strong economic understanding and cooperation in several business sectors."

Shakhbout considered this as a landmark development which would unleash competitive advantages for both Saudi Arabia and the UAE and showcase local culture globally in unique ways. He lauded the joint efforts made towards signing of this important partnership – made possible due to a common interest in creative sectors and the electronic games industry.

"The ongoing partnership and development between Saudi Arabia and the UAE represent the most prominent model of brotherhood and strategic partnership," he added.

Aziza Al Ahmadi, Chair of the Board of Directors and Founder of BossBunny Games, said, "With this cooperation, we will take a significant step to realise the vision of the leadership of the two countries to be the innovators and transform the region into a digital economy powered by our youth’s passion and in turn acquire a significant share of the growing electronic games sector, in addition to catering to today’s lifestyle, where games represent a necessary part. The agreement is the epitome of a major turning point for the games industry in the region and its global launch platform."

Sharing a glimpse of the company's future plans, Aziza Al Ahmadi said,"This new industry offers a large number of career opportunities, now and in the future as an integrated and interconnected chain. At the moment, we are exploring the opportunity to establish an integrated training centre for the games industry in the coming year, bringing talent from the region's universities to hone their skills and potential to provide them with training and development."

On his part, Mohamed Saeed Hareb, Founder and CEO of Lammtara Art Studio, said, "Lammtara’s mission is to create and tell inspiring, magical stories, with class-leading production values and intuitive designs. We are delighted with our partnership with a global electronic games developer in Dubai to take our popular Emirati characters and heritage to a larger audience globally through games on smart devices. I am sure this partnership will bring a lot to the entertainment world in the region as well as globally."

He added, "Over the past years, the UAE-Saudi cooperation has led to qualitative leaps which have positively reflected on the economy and in turn improved the lives of citizens in the two countries and Gulf states as a whole. The cooperation has boosted the attractiveness of the region as an investment destination in various fields, especially in digital and modern technologies, and we hope that this agreement will be a high-quality addition to this string of achievements."

The BossBunny team includes a group of games industry experts from the Arab countries and the world - working together to further the cause of the games industry in the Arab world.

Lammtara’s other works include Freej series, the 3D educational series "Siraj", Mendos" - the only children's series in the Emirates dedicated to the UAE heritage, the cartoon competition programme "The Book of Mysteries", and many other programmes.

About 30 percent of the population of the Gulf Cooperation Council states are digital games users/enthusiasts, and gamers between the ages of 18 and 24 spend an average of eight hours a week on consoles.