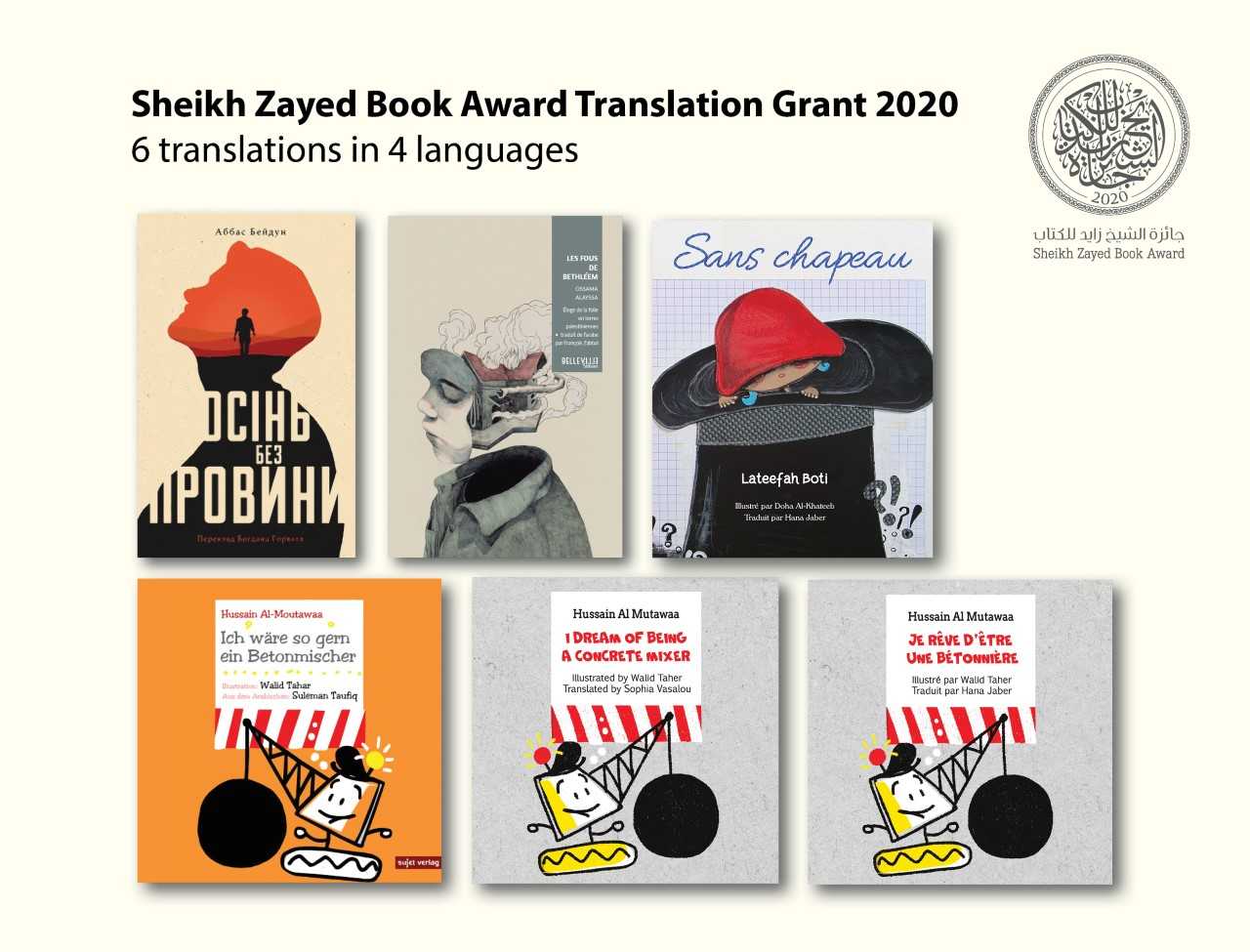 ABU DHABI, 17th December, 2020 (WAM) -- Sheikh Zayed Book Award has released translations of four winning titles in its ‘Literature’ and ‘Children’s Literature’ categories. The works were published in English, French, German and Ukrainian, in collaboration with four international publishing houses and in conjunction with the United Nation’s World Arabic Language Day, which falls on 18 December each year.

Award-winning books translated in the Children’s Literature category include the 2019 novel I Dream of Being a Concrete Mixer by Kuwaiti author, Hussain al-Mutawaa. This was translated into English and French in collaboration with Canadian publisher BookLand Press, and into German with Sujet Verlag UG.

Also included was the 2017 novel Hatless by Kuwaiti writer Lateefa Buti, which was translated into French in collaboration with Canadian publisher, BookLand Press.

Dr. Ali bin Tamim, Secretary-General of the Sheikh Zayed Book Award and Chairman of the Abu Dhabi Arabic Language Centre, said, "Translation is an essential tool for building bridges between different nations around the world, as it plays an integral part in representing cultures, literature and heritage in different languages. Through the translation fund, we want to offer readers around the world a window through which they can explore the best Arabic literary works in their own languages."

Madjid Mohit, Publisher and Executive Director of Sujet Verlag UG, who received the grant to translate "I Dream of Being a Concrete Mixer" into German, said, "Hussain Al Mutawaa’s novel is an opportunity to introduce and promote diversity and open-mindedness to children, thanks to its compelling story and beautiful illustrations. The book deals with the conflict between tradition and modern progress, which is extremely topical."

In turn, Antonenko Anetta, Director of Anetta Antonenko Publishers, who received the grant to translate "The Autumn of Innocence" into Ukrainian, said, "I personally look for interesting titles from around the world and believe that Arabic literature in Ukraine is poorly represented. I was interested in the story itself and I think it will resonate with our readers, as it expresses its subject from a worldview, especially when it comes to future prospects."

For her part, Dorothy Aubert, Director of Belleville éditions, who received the grant to translate "The Madmen of Bethlehem" into French, commented, "Receiving the grant was a wonderful surprise to us, since we were interested in the book before knowing it won the prize. Osama Alaysa’s topics are not really represented in our market, so we feel that it’s important to bring this kind of book to readers. Also, we love the style of the author and his clever way of dealing with different subjects. SZBA’s grant is so helpful since it offered us a very comfortable budget to work on good promotion and enabled us to work with a very good translator."

In addition, Robert Morgan, General Manager of BookLand Press, who received the grant to translate I Dream of Being a Concrete Mixer into English and French, and "Hatless" into French, said, "The publication of these books in English and French gives us a unique opportunity to introduce North American readers to creative and talented contemporary Arab authors and illustrators who, until now, were relatively unknown in these markets."

The Sheikh Zayed Book Award launched the translation fund initiative in 2018 to promote the spread of Arabic literature around the world.