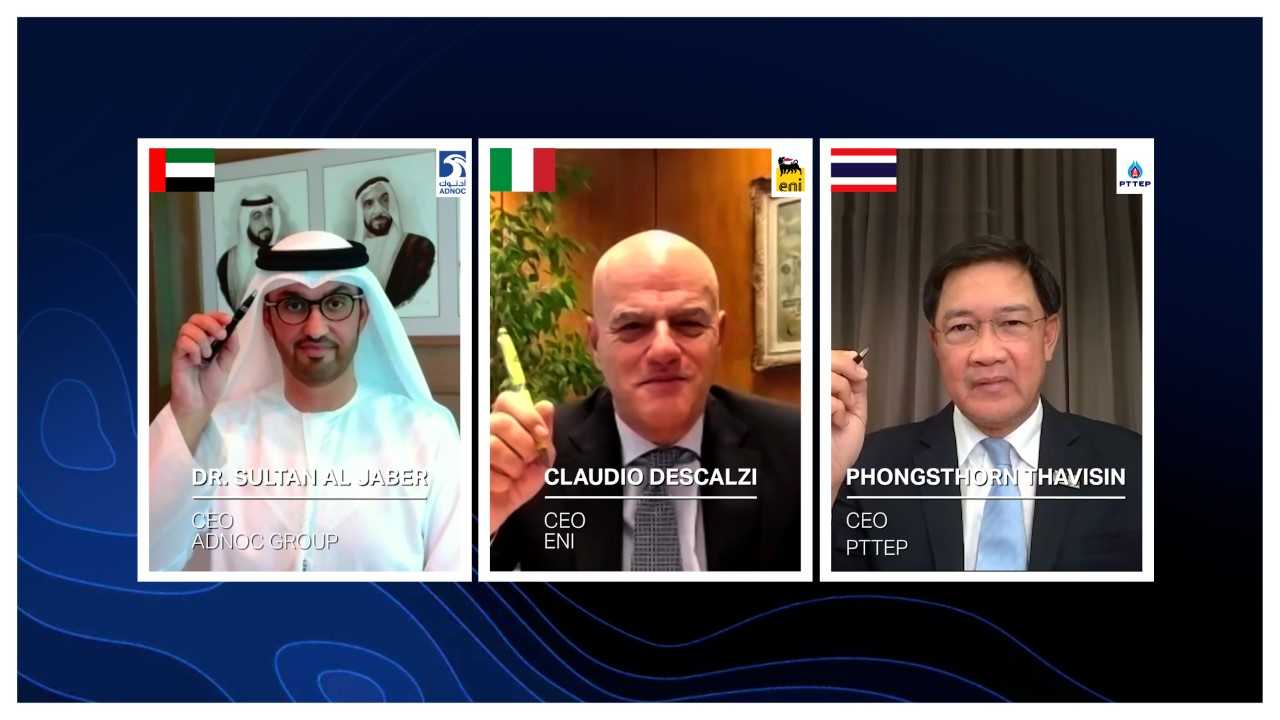 The award has been approved by Abu Dhabi’s Supreme Petroleum Council (SPC). It follows ADNOC’s award earlier this month of an onshore block to Occidental, highlighting how ADNOC continues to leverage and strengthen its strategic partnerships to accelerate the exploration and development of Abu Dhabi’s hydrocarbon resources.

Dr. Al Jaber said, "This concession award reinforces ADNOC and Eni’s growing partnership across our value chain and deepens our relationship with Thailand’s PTTEP, one of the key markets for our crude oil and products. This again validates our targeted approach to value-add partnerships that contribute the right combination of capital, technology, capabilities and market access to accelerate the development of Abu Dhabi’s hydrocarbon resources.

"Despite volatile market conditions, we are making very good progress in delivering Abu Dhabi’s second competitive block bid round, underscoring our world-class resource potential and the UAE’s stable and reliable investment environment. We continue to welcome partners that share our vision to sustainably unlock value from our hydrocarbon resources for our mutual benefit, as we deliver on our 2030 strategy and enable long-term returns to the UAE."

This award underscores the attractiveness of Abu Dhabi’s huge untapped resource potential and ADNOC’s ability to continue to secure Foreign Direct Investment (FDI) to the UAE, despite the tough market environment. Offshore Block 3 offers the potential to create significant in-country value for the UAE over the lifetime of the concession.

Descalzi said, "This award follows the one achieved by the same consortium in 2019 for offshore exploration Blocks 1 and 2 and represents a further important step towards the realisation of Eni’s strategy to become a leading actor in the development and production in Abu Dhabi, a leading region for the oil and gas industry, while contributing through its expertise in exploration to add further resources and exploit all potential synergies with the surrounding fields.

"It also further strengthen our relationship with our valuable partner PPTEP. Offshore Block 3 represents a challenging opportunity that can unlock significant value thanks to exploration and appraisal of shallow and deep reservoirs."

Thavisin stated, "This concession award offers another great opportunity for PTTEP to strengthen collaboration with world-class strategic partners Eni and ADNOC. The consortium will bring capabilities, experiences and technology to accelerate the development of Offshore Block 3, as well as Offshore Blocks 1 and 2, and lead to a successful discovery. The strategic partnership has been established to jointly contribute to the petroleum development in UAE and be part of the growing industry.

"Meanwhile, this business progress has also reinforced our presence in the Middle East following the company’s Execute and Expand strategy. Such approach aims to sustainably increase both petroleum reserves and production in the future."

Offshore Block 3 covers an offshore area of 11,660 square kilometres northwest of Abu Dhabi city. New 3D seismic data has been acquired for a part of the block, which, combined with its proximity to the existing onshore oil and gas fields, suggests the concession area has promising potential.

In addition to drilling exploration and appraisal wells, the exploration phase will see Eni and PTTEP leverage and contribute financially and technically to ADNOC’s mega seismic survey, which is already acquiring seismic data within the block area. This world’s largest 3D seismic survey is deploying industry-leading technologies to capture high-resolution 3D images of the complex geology at ultra-deep locations below the surface and will be used to identify potential hydrocarbon reservoirs.

In January 2019, a consortium led by Eni and PTTEP was awarded two offshore blocks in Abu Dhabi’s first competitive bid round. The consortium continues to explore for oil and gas in the blocks known as Offshore 1 and Offshore 2, located northwest of Abu Dhabi city.

All exploration activities in Abu Dhabi are carefully planned to mitigate any potential impacts through the implementation of protection measures, the use of advanced techniques and technologies, and stakeholder engagement to minimise drilling activities in populated or environmentally sensitive areas.

ADNOC launched Abu Dhabi’s second competitive block bid round in 2019, offering a set of major onshore and offshore blocks, on behalf of the SPC. Based on existing data from detailed petroleum system studies, seismic surveys, exploration and appraisal wells data, estimates suggest the blocks in this second bid round hold multiple billion barrels of oil and multiple trillion cubic feet of natural gas.