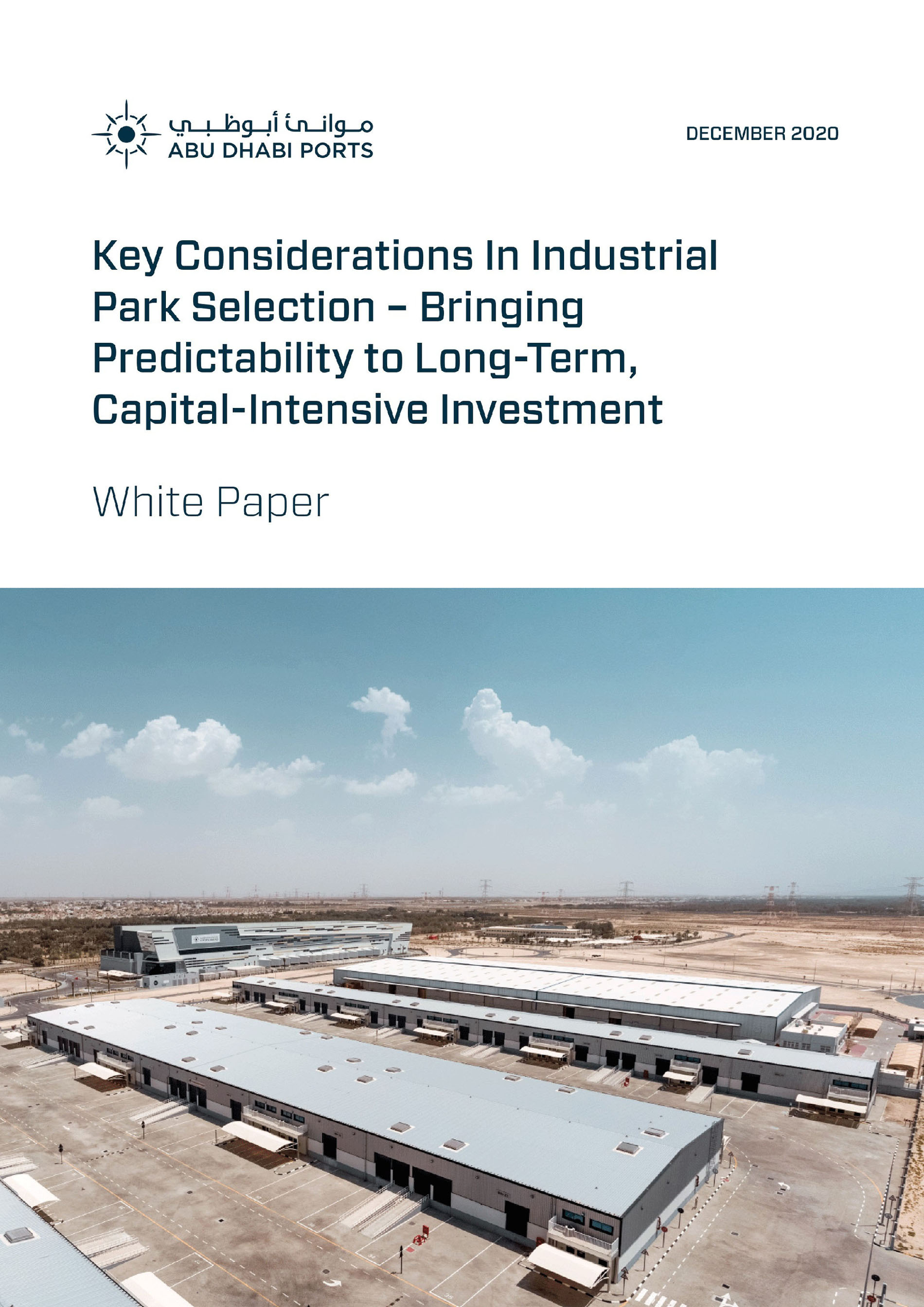 ABU DHBAI, 24th December, 2020 (WAM) -- The world’s most competitive industrial parks are also the most inviting and readily predictable for tenants, according to a whitepaper released by Abu Dhabi Ports, a port operator that owns, manages and operates 11 ports and terminals in the UAE and Guinea.

The whitepaper titled ‘Key considerations in industrial park selection – bringing predictability to long-term capital-intensive investment’, addresses key factors for local and global manufacturers preparing to set up in any one of the close to 100 industrial parks active across the Middle East and North Africa (MENA) region, said a press release issued on Thursday by Abu Dhabi Ports that also owns 555 sqkm of industrial and commercial land in the UAE under its Industrial Cities and Free Zone cluster.

At present, the Middle East is rich with industrial parks, but the UAE leads the field with 47 such zones. It is followed by Jordan with 16, Saudi Arabia and Egypt with 10 each, Oman with five, Kuwait with four and Bahrain three, the whitepaper reads.

Abdullah Al Hameli, Head of the Industrial Cities and Free Zone cluster, Abu Dhabi Ports, said: "Understanding that policies need to be set in place with the acceptance that they are to continuously evolve is important. It is a critical viewpoint that has enabled the UAE to find success with the development of Economic Zones.

"This has been particularly the case with Abu Dhabi within the industrial parks sector, where the Emirate, under the guidance from its leadership, has established a robust economic climate with one major objective – achieve competitiveness for investors and businesses to operate by offering value-driven products," said Al Hameli.

Industry experts interviewed for the whitepaper said that the location of an industrial park is of prime consideration for most businesses. It not only determines access to markets but also factors in whether other enablers – human resources, raw materials, vendor ecosystem, and social infrastructure – are all readily available and within close geographic proximity.

Multimodal connectivity and logistics capability are also crucial considerations for companies in their selection of an industrial park. For example, Abu Dhabi’s industrial zones, which are strategically located with access to over 100 worldwide markets through land, air, and sea, provide a perfect scenario for most companies.

Furthermore, the whitepaper examines other key considerations taken by companies, such as the ecosystem, incentives, and financing factors, against the backdrop of the current global economic climate.

According to the whitepaper, by 2030, it will be difficult to imagine that there is a trade, logistics, or manufacturing-related company anywhere in the world that does not have at least part of its global operation based in an industrial park.

Provided due consideration is given to timeline, market, connectivity, eco-system, incentives, finance, value-chains, 4IR, and sustainability, organisations can be assured to benefit from today’s ever-improving industrial park model.

Since the mid-1990s, the number of industrial parks around the world increased from 800 to over 6,000. Over 70 million jobs have been created globally as a result, and industrial parks have become central to the economic-development agendas of many countries.

Abu Dhabi Ports, part of ADQ, one of the region’s largest holding companies with a broad portfolio of major enterprises spanning key sectors of Abu Dhabi’s diversified economy, aims to increase the competitiveness of Abu Dhabi’s economic zones and make them more attractive destinations for investment in the region.

Combined, KIZAD and ZonesCorp cover a land area of 5.8 billion sqft (555 sqkm), equal to the size of the city of Manchester, UK, and are currently hosting more than 1,400 global, regional, and local organisations.