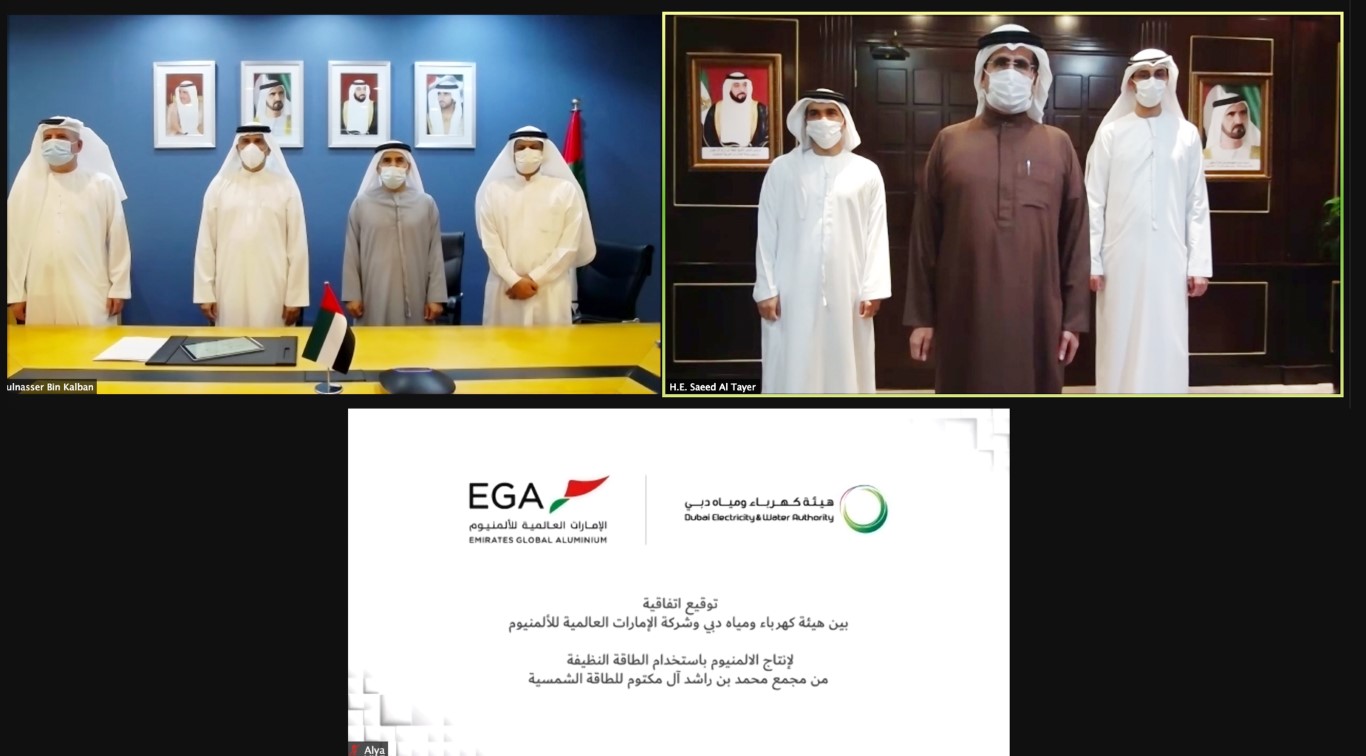 DUBAI, 18th January, 2021 (WAM) -- Dubai Electricity and Water Authority (DEWA) and Emirates Global Aluminium (EGA) today announced that the UAE has become the first country in the world to produce aluminium using the power of the sun.

The milestone supports the vision of His Highness Sheikh Mohammed bin Rashid Al Maktoum, Vice President, Prime Minister and Ruler of Dubai, to make Dubai the most sustainable city in the world and become a global leader in the development and application of scientific and technological advances in the energy sector.

The agreement was signed remotely by Saeed Mohammed Al Tayer, Managing Director and CEO of DEWA and Vice Chairman of EGA; and Abdul Nasser bin Kalban, CEO of EGA, in the presence of Abdullah bin Kalban, Managing Director of EGA, Walid Salman, Executive Vice President for Business Development and Excellence at DEWA and a number of officials from both sides.

DEWA will supply EGA’s smelter with 560,000 megawatt hours of solar power annually from the Mohammed bin Rashid Al Maktoum Solar Park, sufficient to make 40,000 tonnes of aluminium in the first year with the potential for significant expansion. EGA will supply solar aluminium to global customers under the new product name CelestiAL.

Saeed Mohammed Al Tayer, Managing Director and CEO of DEWA and Vice Chairman of EGA, said, "This global achievement of both DEWA and EGA confirms our firm commitment to achieving the vision of His Highness Sheikh Mohammed bin Rashid Al Maktoum, in building a green economy in UAE, and achieving the goals of the Dubai Clean Energy Strategy 2050 in diversifying energy sources and providing 75% of Dubai's energy production capacity from clean energy sources by 2050. To achieve these goals, we have launched many initiatives and projects, most notably the Mohammed bin Rashid Al Maktoum Solar Park, which is the largest single-site solar energy project in the world with a capacity of 5,000 megawatts by 2030. The solar park projects use photovoltaic panels and concentrated solar energy technologies."

Abdulnasser bin Kalban, Chief Executive Officer of EGA, said, "Aluminium is a lightweight, strong and infinitely recyclable metal and these properties mean that as a material it plays a vital global role in the development of a sustainable future. However, it also matters how sustainably aluminium is made. CelestiAL aluminium made in the UAE with solar power, will support modern life for people around the world while also protecting our planet for future generations. This is a great milestone for the UAE and our industry."

Aluminium is used in products and infrastructure from smartphones to skyscrapers. Its uses include applications that contribute to a more sustainable environment from wind farms to electric vehicles, and mass transit to solar panels. The availability of solar power on the scale needed for aluminium smelting has been made possible by the UAE’s significant investment in solar power, including in Dubai by DEWA and its Independent Power Producer (IPP) partners.

EGA’s sourcing of solar power from Dubai’s electricity grid will be tracked and traced through the use of the International Renewable Energy Certification System, ensuring that the energy used to produce EGA’s CelestiAL solar aluminium has been sourced from the sun.