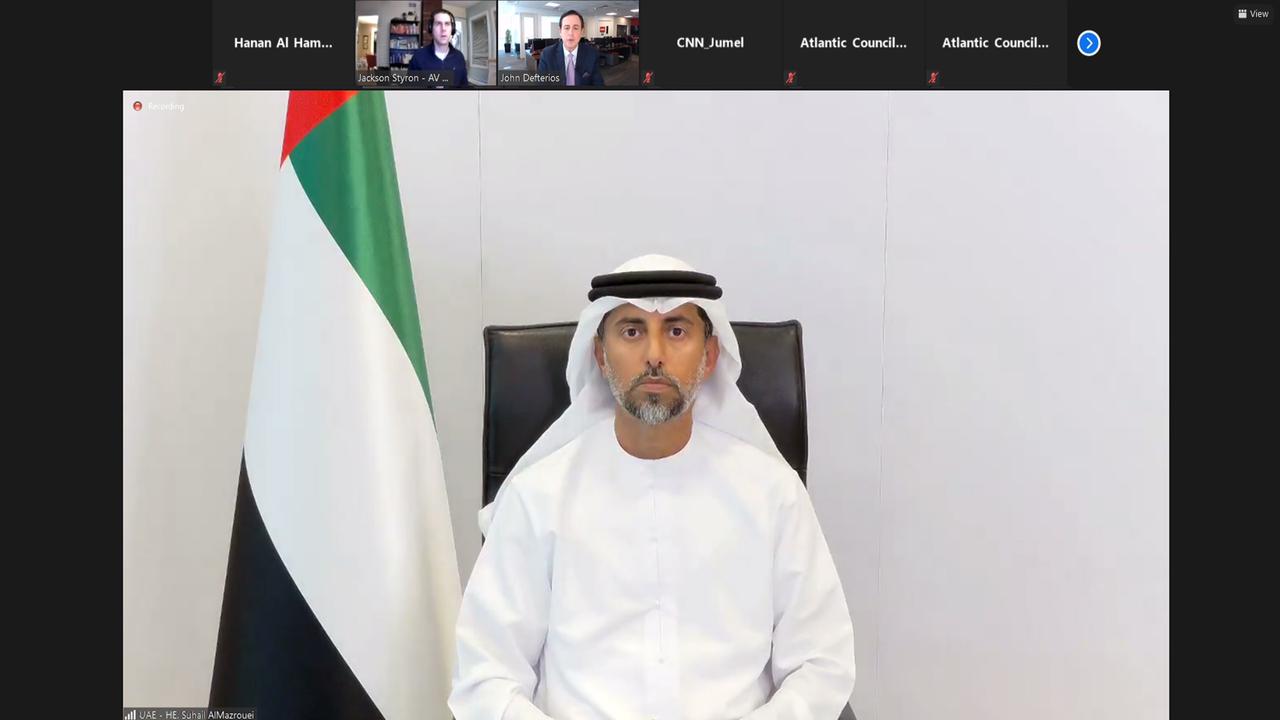 ABU DHABI, 20th January, 2021 (WAM) -- Suhail Al Mazrouei, Minister of Energy and Infrastructure, has said that the UAE seeks to reduce the carbon footprint through the implementation of the Energy Strategy 2050, which aims to reduce carbon dioxide in the country by 70 percent.

"The world aspires to accelerate the energy transition towards a low-carbon future and seeks to reduce emissions," he said, adding, "It is, therefore, imperative that this transformation also guarantees the continuing and growing social and economic well-being of all of the world's population, and we strongly support this approach."

He was speaking at a session titled "The Continuing Role of Oil and Gas in the Energy Sector", held on the sidelines of the Global Energy Forum, organised by the American Atlantic Council.

Al Mazrouei went on to say, "It is with the expectation of an increase in the global demand of (clean) energy over the next three decades, three main challenges are evident, namely, how to meet the growing demand for energy, the ways to ensure access to reliable, affordable and easily accessible energy; and the extent to which it is possible to continue along the path of a low-carbon energy future."

He pointed out that the energy transition requires joint efforts towards economic, social and environmental sustainability, based on the Paris Climate Agreement; and that achieving a balance between the elements of energy security and affordability to meet the increasing demands for energy and the energy transition varies from one country and region to another.

"We are moving towards the production of low-carbon fuels, and the increasing dependence on natural gas, which is one of the cleanest sources of energy and that will preserve the requirements of energy systems budget. There are many strategies available for diversification in the oil and gas industry and transferring assets to include projects of wind energy, solar energy or hydrogen production, which achieves positive opportunities and results," Al Mazrouei pointed out.

He stressed the aspiration of implementing sustainable solutions and a low-carbon future for the energy sector. It is necessary to adopt the concept of a circular carbon economy where every component is carefully managed to ensure that carbon is reduced, reused or recycled and that ADNOC aims to reduce carbon intensity by 25 percent by 2030.

The minister also spoke about the growing role of oil and gas sector in the coming decades to cover the growing demand and ensure reliable and affordable supplies, stressing the capability to maximise energy supply opportunities across countries and continents, and support the growing global demand.

He stated, "Technology will undoubtedly play a vital role in supporting carbon removal, including the technology of carbon capture, usage, storage, utilisation and storage (CCUS), while technologies of the Fourth Industrial Revolution will support improving production and operations.

"The energy sector needs to strengthen research and development and focus on raising the level of efficiency in oil and gas operations, in addition to low-carbon technologies; and that hydrogen energy can be one of the ways to achieve sustainable development in the UAE.

"It can be produced from available and traditional sources such as oil and gas, or renewable sources such as solar energy, wind energy, geothermal energy, and organic sources, while hydrogen production from fossil fuel sources in our region is currently the most competitive, costing US$1.5 per kilogramme."

The Minister stressed the importance of the growing role of carbon capture, utilisation and storage technology in reducing greenhouse gas emissions, pointing out that the joint venture "Al-Reyadah" between ADNOC and Abu Dhabi Future Energy Company "Masdar", proves that the technology of capturing and storing carbon represents a feasible commercial solution to reduce industrial emissions of carbon dioxide, and that the country is preparing for the next 50 years as part of 2071 Agenda.