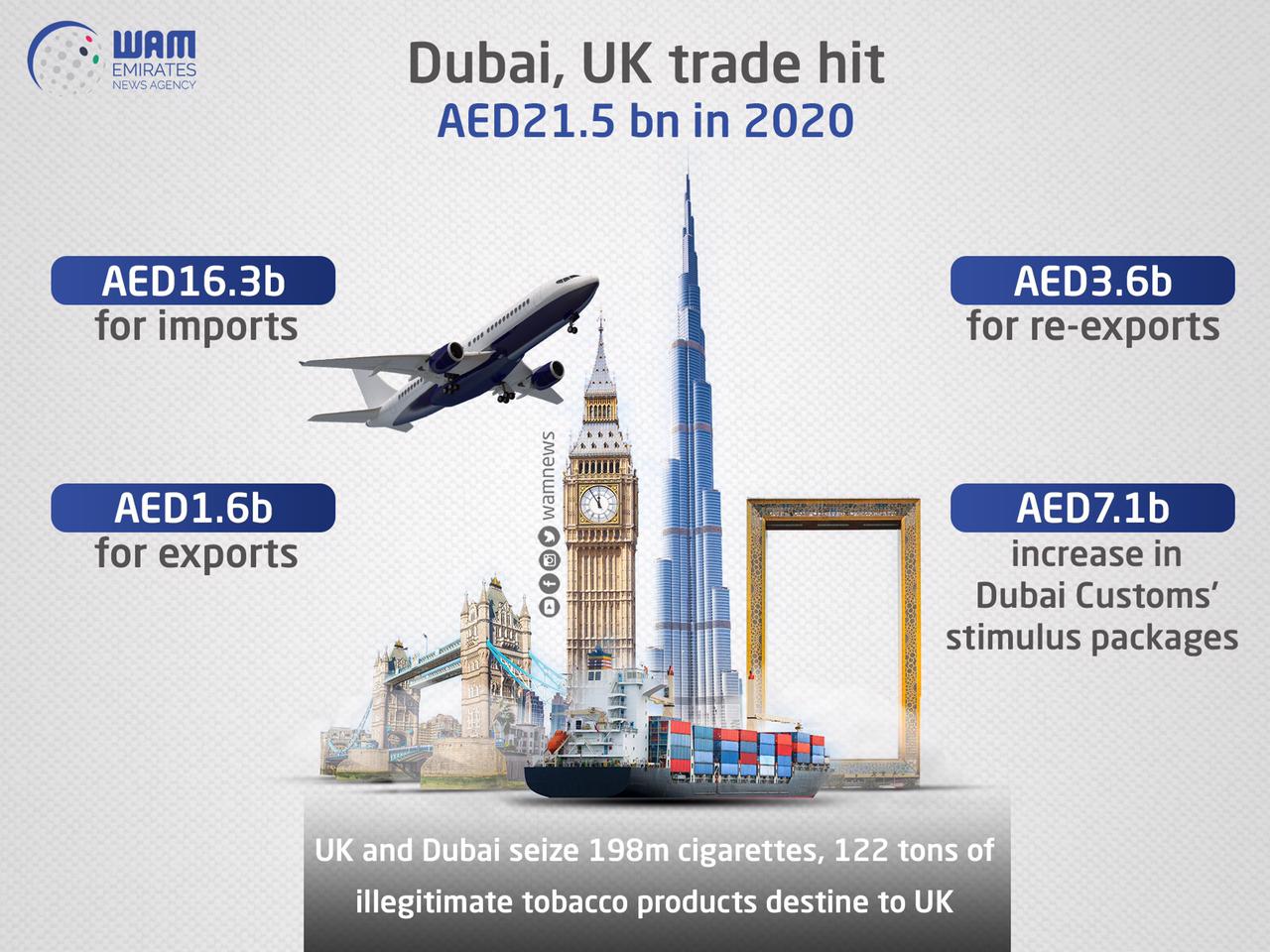 DUBAI, 14th February, 2021 (WAM) -- The implementation of Brexit and the following consequences on trade, travel and security were the main highlights of the meeting that took place between Dubai Customs and its British counterpart.

During the online meeting, Ahmed Mahboob Musabih, Director-General of Dubai Customs, confirmed to Bill Williamson, Director of British Customs, that Dubai Customs will provide all what is necessary to British businesses and investors to help them overcome any challenges that might result from them leaving the trading bloc.

Britain has officially left the European trading block and started applying new procedures from the first day of the new year.

On his part, Williamson highly commended the outstanding achievements and performance of Dubai Customs in the past few years. He attributed that to the hard work of its teams and the sophisticated and advanced technologies used in its operations.

This has helped in expediting trade, close monitoring of traffic of goods between the two sides, and helping British authorities thwart cross border illegitimate shipments, he explained.

"We would like to enhance international efforts in what is related to legitimate trade and to have more cooperation and exchange of information and experience with Dubai Customs," Williamson asserted. "Dubai Customs has long and outstanding experience that will help us facilitate trade and build advanced customs systems. Dubai Customs and Her Majesty Revenue & Customs (HMRC) share important relations. The work undertaken by the Fiscal Crime Liaison Officers based in Dubai is important as we seek ways in which to deepen our mutual co-operation further."

Musabih said, "The UK is one of our biggest trade partners. Dubai external trade with the UK stood at AED21.5 billion in 2020 (AED16.3b for imports, AED1.6b for exports, and AED3.6b for re-exports).

He stressed the strong relations between the United Arab Emirates and Britain, which resulted in fruitful mutual trade and expanded security and investment horizons. "The cooperation between Dubai Customs and the UK authorities has helped in fighting illegitimate trade, especially in counterfeit tobacco products. The UK and Dubai have seized 198m cigarettes and 122 tons of illegitimate tobacco products that were to be transported to the UK," he added.

Musabih invited his British counterpart to attend the 5th WCO Global AEO Conference, hosted by Dubai in coordination with the World Customs Organisation and the Federal Customs Authority. The international event will include rich discussion panels and roundtable meetings to discuss all customs related issues and means to develop the sector. It will see the participation of around 1,500 experts in the field.

The meeting has also covered procedures taken by the two sides to mitigate the impact of the pandemic.

Musabih said Dubai Customs has increased the stimulus packages to AED7.1 billion, which will be distributed to businesses to help them quickly recover from the repercussions of the crisis and go back to normal.