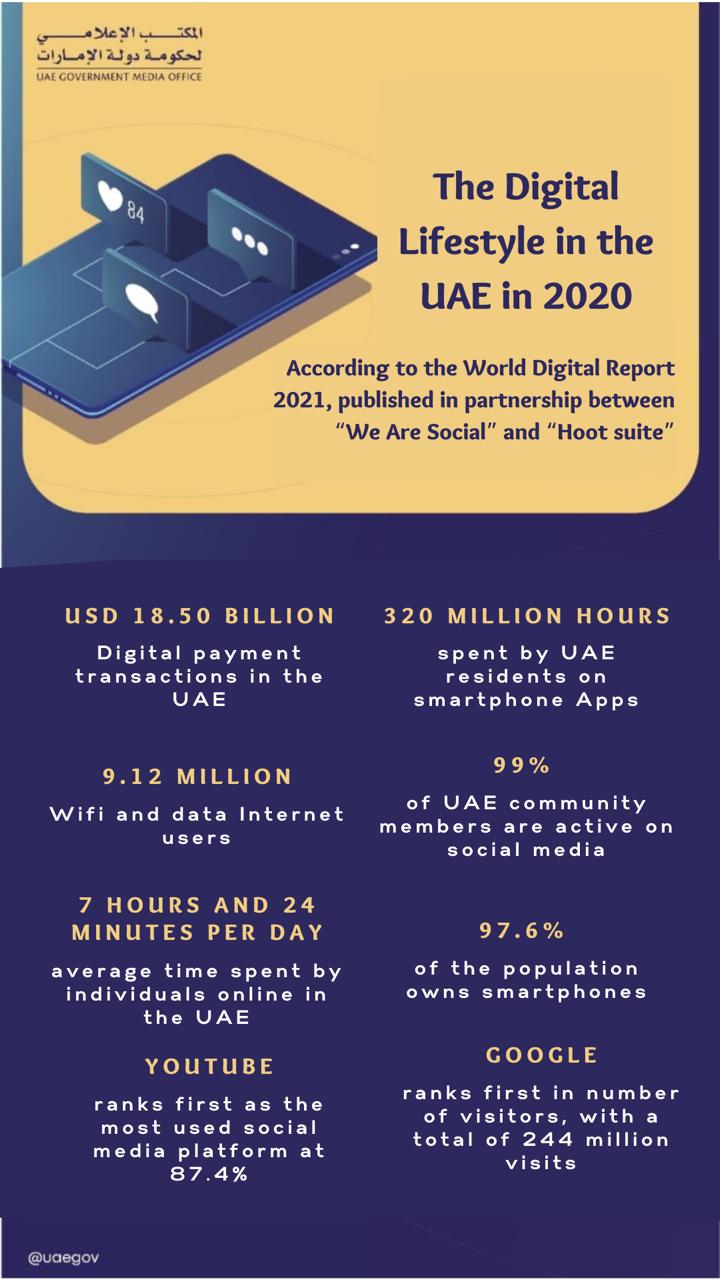 DUBAI, 6th March, 2021 (WAM) -- The Telecommunications and Digital Government Regulatory Authority has appreciated the data insights by the World Digital Report 2021, published in partnership between "We Are Social" and "Hoot suite". The report sheds light on the digital lifestyle in the UAE, based on group data that monitored individuals and companies' behavior during the year 2020, which witnessed the coronavirus pandemic.

The report has also indicated that the UAE residents spent 320 million hours on Smartphone applications during 2020 and the number of smart homes in the country has reached 190,000.

Hamad Obaid Al Mansoori, Director-General of the Telecommunications and Digital Government Regulatory Authority, Head of the Digital Government of the UAE government, commented, "The emergency faced by the world last year, has made 2020, a digital year of excellence, as websites, social media pages, portals and smart sites thrived. They were the only means for the world's population to pursue their lives, work and education. The communications and information technology sector's overall infrastructure has been a decisive factor in enabling many sectors of society to maintain the continuity of various aspects of everyday life like work, education, and shopping.

"Most importantly, the period has proved that digital transformation is an urgent necessity and not a technical luxury. Following our wise leadership's directives, we in the UAE have been pioneers in this process, as most government agencies developed their smart platforms and services. We were the first to adopt and develop digital solutions that enabled us to overcome the difficult situation and managed to achieve many successes," he added.

The report also mentioned that Google ranked first as a search engine in terms of the number of visitors with a total of 244 million visits, while YouTube ranked first at 87.4 percent as the most widely used social media platform.

Telecommunications and Digital Government Regulatory Authority has launched several initiatives to support the vision of the country's leadership. These are related to remote working, distance learning, e-commerce and providing government services remotely. In coordination with service providers, the authority provided a set of applications to support remote working from homes.

The authority has worked with service providers to raise the fixed broadband speed to 100 megabytes per second to secure high internet speeds that ensure the smooth running of remote work operations. The Authority and service providers enhanced network capacity and re-engineered bandwidth to provide seamless remote work experiences.