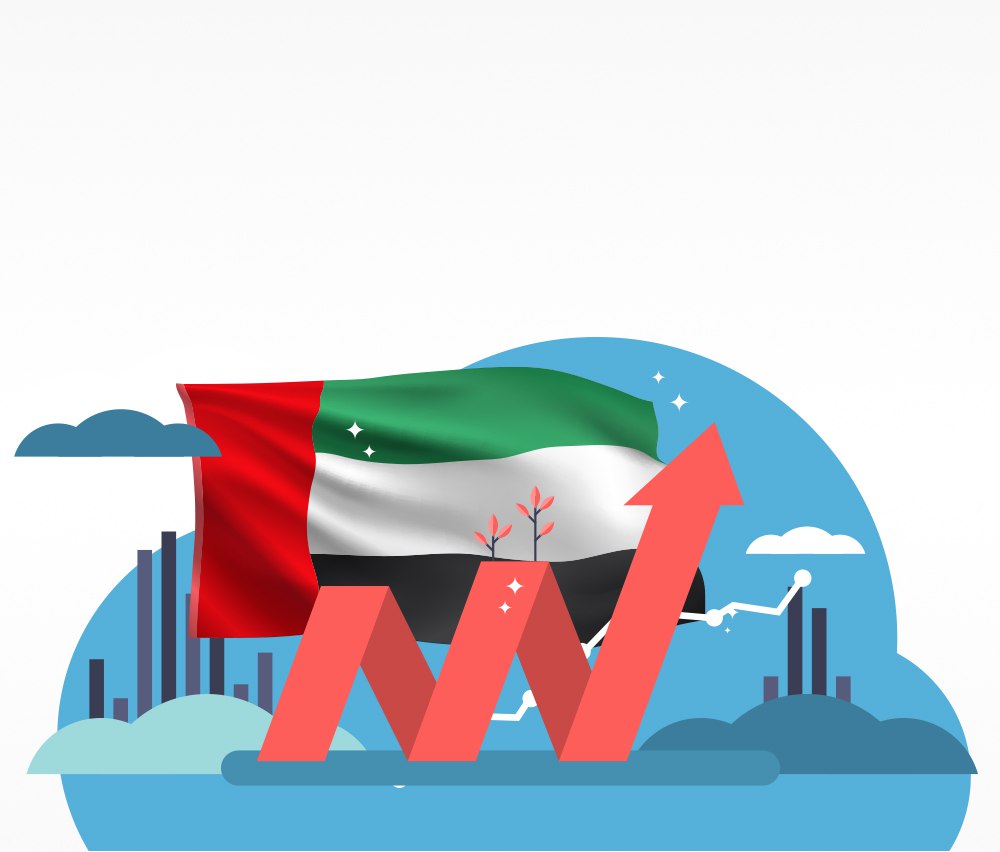 In collaboration with the Federation of Arab News Agencies (FANA), the Emirates News Agency (WAM), produced a detailed report on the current status of the UAE economy.

ABU DHABI, 9th March, 2021 (WAM) -- In 2020, the UAE’s economy showed a remarkable ability to overcome the impacts of the coronavirus pandemic, with the Central Bank of the UAE revealing that early recovery signs began to emerge in the second half of 2020.

The UAE is among the first countries to start this recovery phase, ranking first in the Arab region in the COVID Economic Recovery Index Ranking issued by the Horizon Research Group.

In December 2020, the UAE government has received Aa2 rating in creditworthiness – which is the highest sovereign rating in the region – with a stable outlook for the national economy by the international rating agency, Moody's. This is another testament to the success of the country's financial and economic vision and policies, and the strength and stability of its economic, financial and credit sectors.

In November 2020, Fitch Ratings awarded the UAE’s federal government with an AA- rating with a stable outlook.

In its report on the UAE’s sovereign credit profile, Moody’s pointed out that the country’s credit strength is supported by a high GDP per capita, as well as by its internal stability and strong and broad international relations.

The Central Bank of the UAE expected robust GDP growth in 2021, as the government is continuing its efforts to diversify the economy, boost spending on infrastructure and encourage private investment, as a gauge for growth and private sector employment.

The bank added that despite the extraordinary global conditions caused by the pandemic, there is optimism due to some early signs of a rise in international trade, such as the gradual lifting of movement restrictions, the issuance of bonds and sukuk, the resumption of activities in capital markets, steady negative inflation rates, the return of spending levels to normalcy, the rise of the national employment rate to 1.7 percent per month in December, and the monthly rise of real estate sale prices.

Oil and Gas In 2020, several positive signs about the future of the UAE’s oil and gas sector emerged, most notably with the success of the Abu Dhabi National Oil Company (ADNOC) in achieving its operational and financial objectives, and maintaining its competitiveness and flexibility, as well as the continuity of its business amidst the extraordinary conditions facing the world as a result of the pandemic.

In terms of discoveries, development and production, ADNOC’s major achievements in 2020 included the discovery of a new natural gas field in an area between Seih Al Sedirah in Abu Dhabi and Jebel Ali in Dubai, containing massive stocks totalling some 80 trillion cubic metres.

This important discovery contributes to approaching the goal of achieving the country's self-sufficiency in natural gas supplies.

The Supreme Petroleum Council (SPC) also announced the discovery of 22 billion stock tank barrels (STB) of non-conventional and recoverable crude oil in Abu Dhabi, which will strengthen the UAE’s position as one of the largest energy providers in the world.

In terms of petrochemicals and refining, ADNOC and ADQ announced the establishment of a joint venture, "TAZIZ", which will act as a catalyst for the UAE’s economic diversification and technology-led growth.

Despite the conditions and challenges facing the market, which witnessed fluctuations in oil prices and uncertainty, leading many investors to refrain from engaging in new deals, ADNOC attracted foreign direct investments (FDI) worth AED62 billion to the UAE in 2020, with the total FDIs attracted by ADNOC since 2016 valued at AED237 billion.

Foreign Trade The total value of the UAE’s non-oil foreign trade during the first nine months of 2020 amounted to AED1.03 trillion, according to the National Competitiveness and Statistics Centre’s figures. The country’s trade balance registered an excess, for the first time this year, of 15 percent in September 2020, as well as a growth in third-quarter exports by 5.6 percent.

Real Estate The real estate market maintained its activity level in 2020 despite the conditions caused by the pandemic, with the value of registered transactions in the real estate market amounting to nearly AED275 billion, including land, residential, commercial and industrial unit sales, as well as mortgages and grants.

The Digital 2021: Global Overview Report by We Are Social and Hootsuite highlighted the fact that e-commerce witnessed a substantial rise in the UAE during the coronavirus crisis, with the value of e-commerce transactions in 2020 amounting to US$18.50 billion.

Aviation The gradual resumption of local civil aviation flights is a key indicator of the success of the efforts to contain the pandemic and the start of the recovery phase, most notably in light of the correlation between the total recovery of many economic sectors and the progress achieved by the aviation sector.

The Dubai Airports Company stated that this recovery is robust from a global market standpoint, considering that the number of international destinations currently served by Dubai International Airport is 147, with a recovery rate of 61 percent.

Statistics on annual traffic movement in the second half of 2020 were quite positive, with December exceeding expectations, witnessing a total of 2.19 million passengers. Furthermore, the closing statements underscored a significant overall recovery, most notably with the resumption of services in global markets due to the robust operations of Emirates airline and flyDubai.