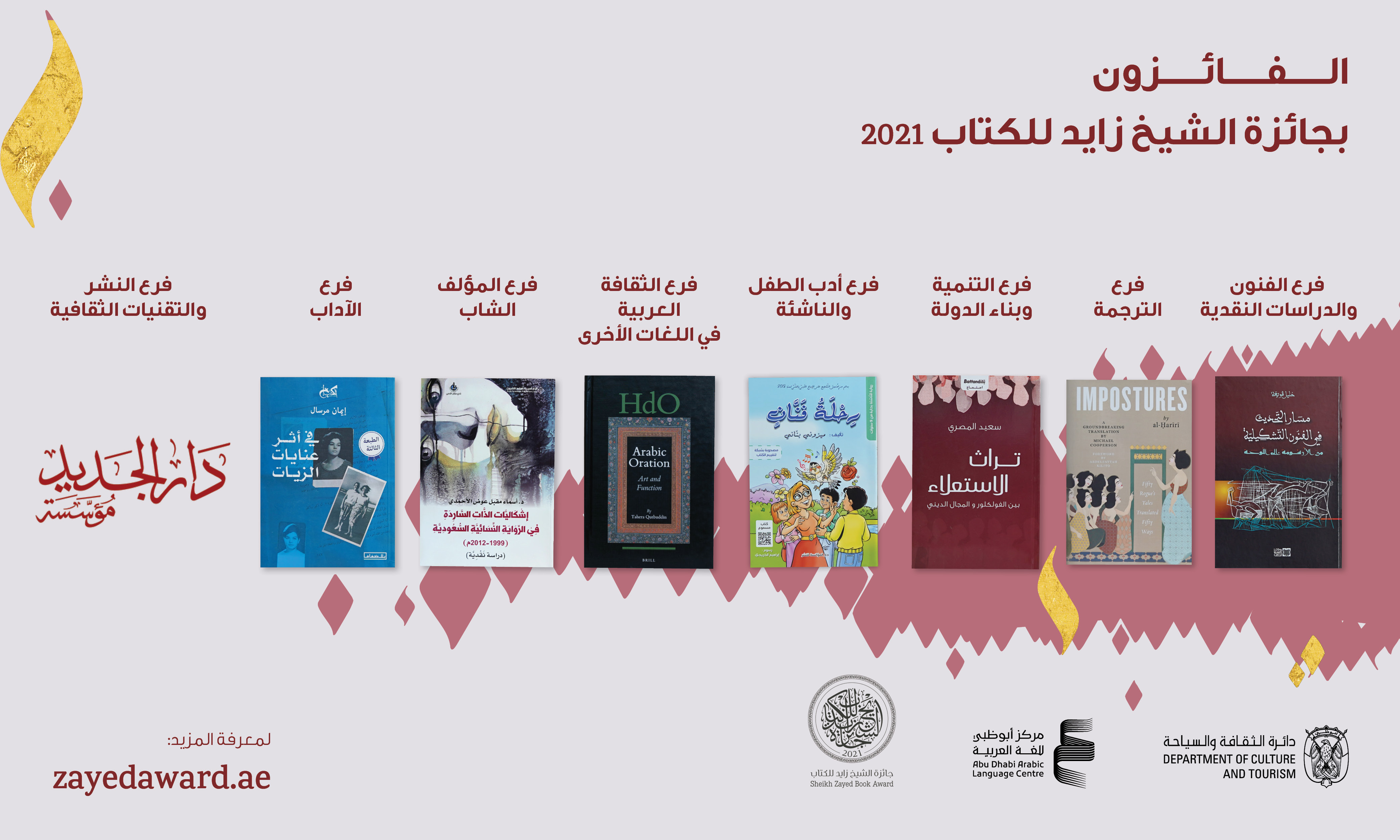 ABU DHABI, 22nd April, 2021 (WAM) -- Under the patronage of His Highness Sheikh Mohamed bin Zayed Al Nahyan, Crown Prince of Abu Dhabi and Deputy Supreme Commander of the UAE Armed Forces, the Sheikh Zayed Book Award has announced the winners of its 15th edition, the largest in its history in terms of submissions.

The list of prize winners, organised by the Abu Dhabi Centre for the Arabic Language of the Department of Culture and Tourism - Abu Dhabi, included seven authors and researchers from Egypt, Tunisia, Saudi Arabia and the US, in addition to a Lebanese publishing house.

Egyptian writer, Iman Mersal, won the Literature category for her book Fee Athar Enayat Al Zayyat (In the Footsteps of Enayat Al-Zayyat) that was published in 2019 by Al Kotob Khan Library, while Tunisian author, Mizouni Bannani, won the Children’s Literature award for his book Rehlat Fannan (An Artist's Journey), published by Dar Al Mua'nasa Publishing in 2020. The Translation award went to Impostures by Al-Hariri, translated from Arabic to English by Michael Cooperson from the USA, and published by Library of Arabic Literature in 2020.

The Literary and Art Criticism award went to Tunisian researcher, Khelil Gouia, for his book Masar Al Tahdeeth fe Al Fonoon Al Tashkelyah, men Al Orsomah ella Al Lawha (The Path of Modernisation in the Visual Arts, From Drawing to Painting), published by Med Ali Éditions in 2020. The Contribution to the Development of Nations was awarded to Dr. Saeed El-masry from Egypt, for his book Turath Al Iste’ela’a bayn Al Folklor wa Al Majal Al Deeny (Legacy of Supremacy between Folklore and Religion), published by Batana Publishing & Distribution in 2019, and Tahera Qutbuddin from the USA won the Arab Culture in Other Languages award for her book Arabic Oration: Art and Function, published by Brill Publishers in 2019.

The Young Author category was won by Dr. Asma Muqbil Awad Alahmadi from Saudi Arabia for the study Eshkalyat Al Thaat Al Saredah Fee Al Rwayah Al Nesaayah Al Saudiah (The Problems of the Narrated Self in the Saudi Feminist Novel (1999 - 2012) (Critical Study), published by Arab Scientific Publishers Inc. in 2020. Dar Al Jadeed from Lebanon won the Publishing and Technology award, in recognition of its role in shedding light on long-forgotten topics in Arab publishing, as well as its contributions to the Arabic library with science books and linguistic and intellectual studies.

Mohamed Khalifa Al Mubarak, Chairman of the Department of Culture and Tourism – Abu Dhabi, said, "Since its first edition in 2006, the Sheikh Zayed Book Award has proved to be a beacon of culture and literature, recognised and respected internationally as a champion of creativity. Through this inspirational Award, we honour the memory of our nation’s founding father, the late Sheikh Zayed bin Sultan Al Nahyan, whose far-reaching vision for the UAE was intrinsically linked to the cornerstones of culture, knowledge and human development."

Dr Ali bin Tamim, Chairman of the Abu Dhabi Arabic Language Centre and Secretary-General of the Sheikh Zayed Book Award, commented, "Despite the challenges of 2020, we were delighted to see a record-breaking year with submissions of exceptional quality. As one of the Arab world’s leading cultural awards, we are proud to support a flourishing international publishing landscape and pleased to see winners from five countries around the globe. The judges were especially impressed with the range of genres, the breadth of topics and the ambition of the scholars and writers represented here. This year’s winners highlight the depth and prestige of the Award in the Arab world and beyond. We commend their achievement and look forward to seeing more superb work in the years to come."