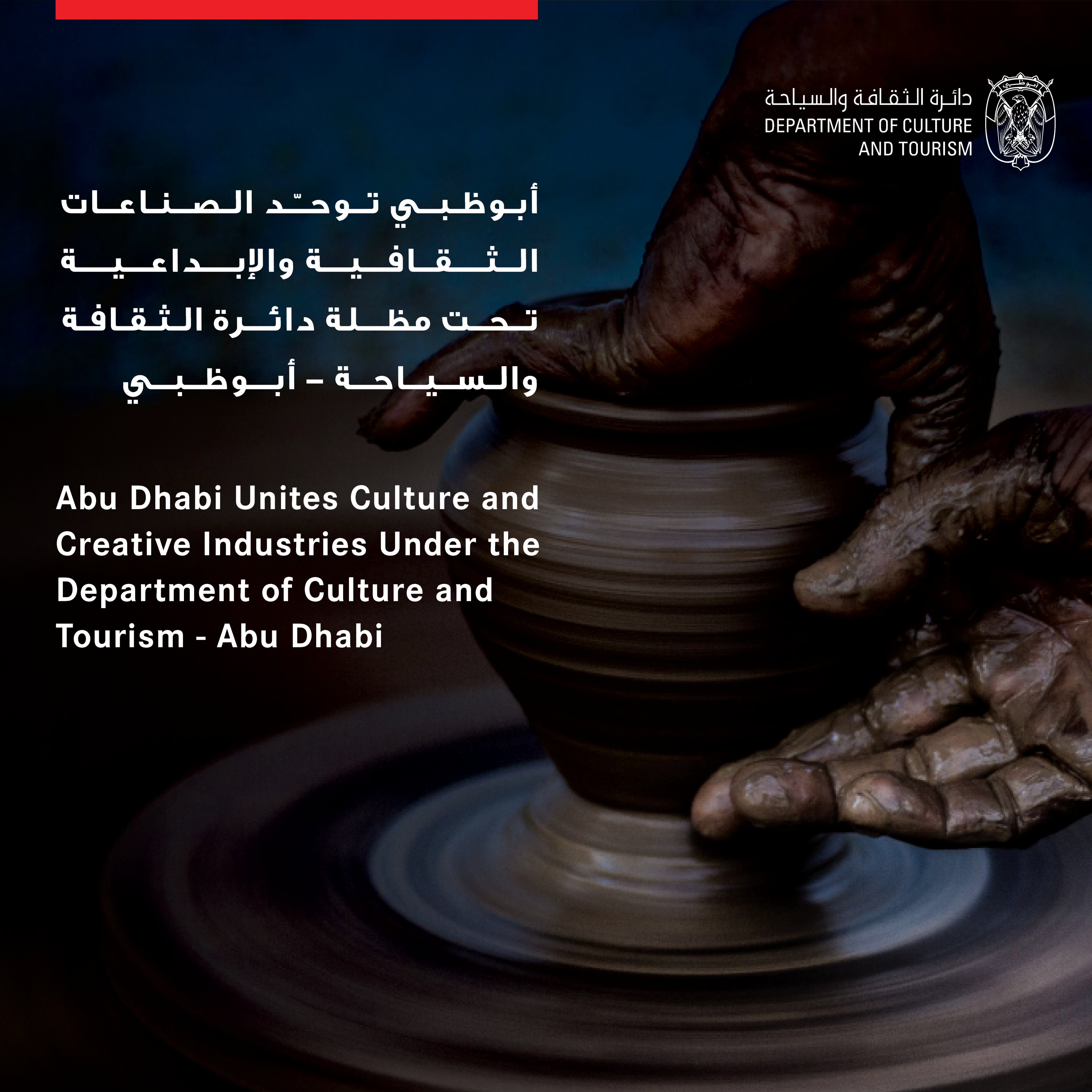 ABU DHABI, 8th June, 2021 (WAM) -- Abu Dhabi is accelerating the growth of the Culture and Creative Industries (CCI) through a AED30+ billion investment strategy that sees the Department of Culture and Tourism – Abu Dhabi (DCT Abu Dhabi) cements its leadership position as the custodian of all the multidisciplinary sectors within the CCI.

The Culture and Creative Industries are key drivers of social and economic growth and diversification in Abu Dhabi. One of the fastest growing economic sectors worldwide, globally they generate annual revenues of US$2,250 billion, provide 30 million jobs and are predicted to make up some 10% of global GDP.

In addition to this rapid acceleration, studies show that the CCI demonstrate considerable resilience and adaptability in the face of changing economic dynamics. As the world emerges from the effects of the global pandemic, the sector’s high-value products and services have the power to support a new economic recovery, one that is more environmentally friendly and based on knowledge and new technologies.

To capitalise on this growth, Abu Dhabi has invested significantly and strategically to create thriving Culture and Creative Industries, with an overall planned investment in excess of AED30 billion. Over the past five years, AED8.5 billion has been committed across the emirate, including in flagship projects such as Yas Creative Hub – the emirate’s new home for media and gaming - and Saadiyat Cultural District, as well as soft infrastructure initiatives such as the Creative Visa, announced earlier this year.

The Creative Visa programme will provide sustainable employment opportunities in Abu Dhabi by enabling talented creative professionals from around the world to live and work in the UAE, further bolstering the creative scene in the emirate.

A further AED22 billion is expected to be rolled out across the industry over the next five years, with a substantial portion to be deployed in the development and support of cultural institutions, mainly new museums, including the upcoming Zayed National Museum and Guggenheim Abu Dhabi, as well as additional museums in the pipeline. The emirate’s performing arts, music, media and gaming sectors will also see further investment in their diverse array of programmes and initiatives.

Now, DCT Abu Dhabi brings all CCI domains under one roof, adding cutting-edge domains such as film and TV, multimedia, gaming and esports to its existing sectors of heritage, crafts and design, publishing, visual and performing arts. By doing so, it ensures consolidated cross-sectorial synergy between the key domains of the Culture and Creative Industries.

With a single custodian and ongoing investment, the industry’s growth will continue to accelerate and support a unified creative ecosystem across the public and private sectors.

"With the entire CCI under one umbrella, DCT Abu Dhabi is able to harness the natural synergies between the emirate’s culture, tourism and creative sectors, establishing Abu Dhabi as a centre for cutting-edge facilities, outstanding talent and enriching, sustainable opportunities.

"We see the Culture and Creative Industries as a powerful driver of economic diversification as well as defining pillars of the emirate’s identity. Through Abu Dhabi’s pioneering leadership, we will champion all CCI domains to transcend borders and reach global audiences and communities."

Saood Al Hosani, Undersecretary of DCT Abu Dhabi, said, "The Culture and Creative Industries are a significant contributor to the global and local economies. Today, Abu Dhabi supports more than 20,000 sustainable jobs in the field, and we expect this to grow significantly in the coming years.

"DCT Abu Dhabi’s comprehensive five-year strategy to build on the emirate’s pre-existing success in this area is now seeing diverse yet interrelated sectors streamlined under one organisation. This will greatly accelerate job creation, allowing individuals and businesses to reach new levels of professional and economic success.

Abu Dhabi has been investing heavily in the Culture and Creative Industries, with investments spanning the creation of cultural institutions and world-class infrastructures to programmes and initiatives of international relevance that have supported the growth of creative and culture businesses, professionals and practitioners based in the emirate and beyond.

The emirate’s integrated CCI Strategy, developed by DCT Abu Dhabi in conjunction with key stakeholders, brings together best practices while considering the specificities of Abu Dhabi. In support of a sustainable creative ecosystem, goals are being targeted across all sectors under five key pillars: policies and systems, talent and professional development, innovation and digitisation, business development, and place and infrastructure that enhance the quality of life. The strategy includes more than 16 strategic programmes and 800 initiatives, some already initiated and the remainder to be delivered in the next five years.

DCT Abu Dhabi is tasked with managing and continuously enhancing the emirate’s Culture and Creative Industries, having already delivered, through its Culture Sector, high-profile projects such as Louvre Abu Dhabi and Al Hosn, with more large-scale projects to come, including the, Guggenheim Abu Dhabi, Zayed National Museum and Abrahamic Family House, all part of the landmark Saadiyat Cultural District.

DCT Abu Dhabi also oversees the preservation and promotion of the emirate’s rich cultural heritage, including the UNESCO World Heritage Site of Al Ain and Abu Dhabi’s modern heritage buildings, as well as the intangible heritage practices that are essential to the Emirati identity.

In addition, DCT Abu Dhabi’s Arabic Language Centre acts as custodian and advocate of the Arabic language, through initiatives and platforms including the Sheikh Zayed Book Award and the Abu Dhabi International Book Fair, and is also forming partnerships with internationally recognised institutions such as Columbia University.

The consolidation of the emirate’s CCI under DCT Abu Dhabi cements its role as the driver of the industry, with full oversight across all interrelated domains within the culture, multimedia and gaming arenas and a mandate to create an environment where the entire culture and creative sector can grow and thrive.

To bolster this development, DCT Abu Dhabi is expanding its portfolio to include a new sector that will support the emirate’s creative industries, create opportunities, and oversee the Creative Visa programme. Its mandate will include regulating, promoting and developing a number of strategic initiatives and overseeing organisations including Image Nation Abu Dhabi, Abu Dhabi Gaming, and Abu Dhabi Film Commission, as well as training and development programmes such as creative lab and Arab Film Studio.

Further details of DCT Abu Dhabi’s new multimedia and gaming sector and its mandate will be announced shortly.