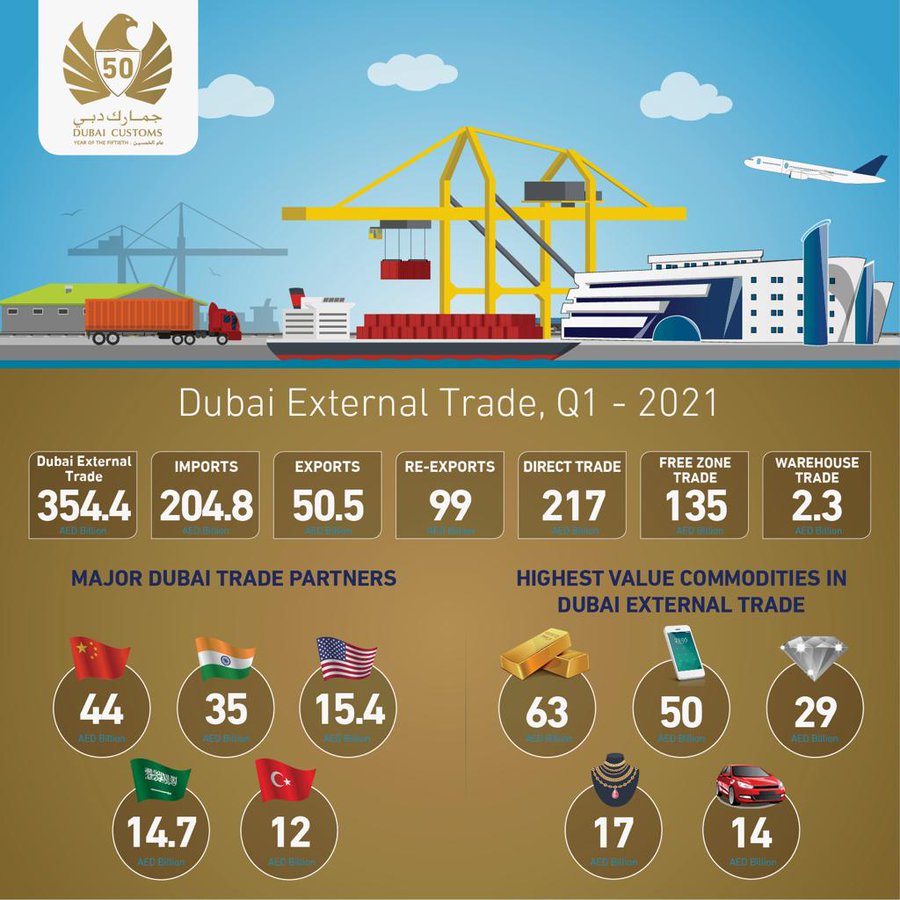 DUBAI, 12th June 2021 (WAM) - Dubai’s economy has proved its resilience and ability to recover quickly from the global repercussions of the COVID-19 pandemic by achieving high levels of external non-oil trade growth in Q1 2021.

Dubai’s foreign trade this quarter touched AED354.4 billion growing 10% from AED323 billion in the corresponding period in 2020, and 5% compared to Q1 2019. This reflects a rapid return to recovery and growth in the external trade sector and an ability to adapt to drastic changes in the international trade environment. Exports grew 25% to AED50.5 billion, representing a volume of 5 million tonnes, a rise of 20%, and imports accounted for AED204.8 billion, growing 9%. The value of re-exports reached AED99 billion, growing 5.5%.

Commenting on the outstanding growth, H.H. Sheikh Hamdan bin Mohammed bin Rashid Al Maktoum, Dubai Crown Prince and Chairman of The Executive Council of Dubai said: "This remarkable performance reflects our external trade sector’s impressive resilience and its ability to rebound and grow in the face of major international crises. Inspired by the vision and directives of His Highness Sheikh Mohammed bin Rashid Al Maktoum, Vice President and Prime Minister of the UAE and Ruler of Dubai, we have always turned challenges into opportunities. We have been able to achieve this by virtue of our good governance, advanced infrastructure, strategic location, our status as a regional and global hub for trade, and the generous stimulus packages that the government has launched in support of trade and businesses.

"This remarkable growth will get us closer to the ambitious target of Dubai’s five-year strategy to raise the value of external trade to AED2 trillion and consolidate its position as a bridge connecting regional and international markets by constantly enhancing its infrastructure and logistics services. Furthermore, by hosting EXPO2020, ‘the world’s greatest show’, Dubai will make a significant contribution to the recovery of the global economy and help it move towards prosperity again."

Sultan bin Sulayem, DP World Group Chairman & CEO and Chairman of Ports, Customs and Free Zone Corporation, said: "Dubai recovered quickly from the repercussions of the current global crisis and has resiliently grown its trade, spurred by its strong investments and advanced technological capabilities, which enabled it to continue its global trading activities during what has been a testing time. The impressive success of the vaccination campaign in the UAE has created high levels of global confidence in the country and helped Dubai add to its profile as the city with the world’s most favourable business environment.

The Chairman of the Ports, Customs and Free Zone Corporation said Dubai has enhanced its vital role in global trade by regularly hosting international trade events. These include the fifth WCO Global AEO Conference, which Dubai Customs organised in cooperation with the World Customs Organization and the Federal Customs Authority. The Conference saw the participation of about 100 renowned speakers, and more than 12,000 experts from 160 countries.

More growth is set to be generated with Dubai preparing to host EXPO 2020. Dubai Customs is offering an improved set of facilities and services specifically designed for EXPO exhibitors.

China maintained its position as Dubai’s largest trading partner in Q1, 2021 with AED44 billion worth of trade, representing a growth of 30%. India came in second with AED35 billion, growing 17%, followed by the USA in third place with AED15.4 billion. Saudi Arabia continued to be Dubai’s largest Gulf and Arab trade partner and its fourth largest global trade partner with AED14.7 billion worth of trade, growing 20%, followed by Turkey in fifth place with AED12 billion, representing a staggering growth of 72%.

Gold topped the list of commodities in Dubai's Q1 external trade at AED63 billion, growing 27%, followed by telecoms at AED50 billion, growing 32%. Diamonds registered a record growth of 61% and came third in the list with AED29 billion, followed by jewelry with AED17 billion, and vehicle trade, which grew 9% to reach AED14billion.