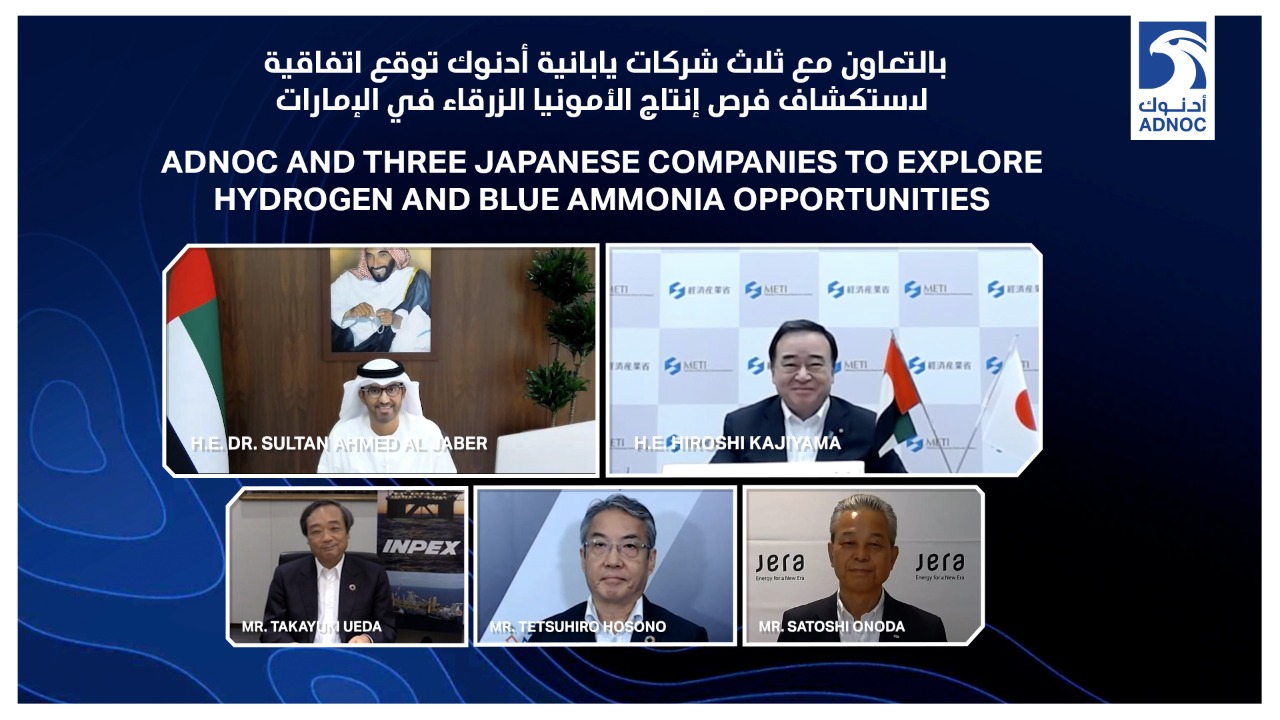 The agreement builds on ADNOC’s low-carbon fuels leadership and extensive experience in carbon capture and storage and follows a virtual meeting between Dr. Sultan Ahmed Al Jaber, UAE Minister of Industry and Advanced Technology and Managing Director and Group CEO of ADNOC, and Kajiyama Hiroshi, Japan's Minister of Economy, Trade, and Industry (METI).

During the meeting, the ministers reviewed joint efforts between both countries to enhance industrial cooperation and drive new opportunities for partnerships in hydrogen, renewables, and climate change following a series of framework agreements ADNOC signed with Japan’s METI as well as other Japanese companies earlier this year.

Dr. Al Jaber said, "For almost five decades, the UAE and Japan have enjoyed a deep-rooted and successful strategic relationship, underpinned by long-standing energy partnerships. As we increase our focus on the potential of new lower carbon fuels and navigate the energy transition, the UAE and ADNOC are keen to build and strengthen our existing partnerships and seize growth opportunities with Japan that can help produce more energy with fewer emissions.

"This joint study agreement with INPEX, JERA and JOGMEC provides a roadmap for us to deepen access to Japanese markets for ADNOC’s products and further strengthen the UAE’s hydrogen value proposition."

The UAE is aiming to expand bilateral economic and trade relations with Japan as it drives post-COVID economic growth and ADNOC is leveraging its status as a long-standing reliable and stable supplier of oil and gas to Japan to nurture new partnership opportunities between both countries. Japan is ADNOC’s largest international importer of oil and gas products with approximately 25 percent of its crude oil imported from the UAE.

Kajiyama said, "In January, METI and ADNOC signed a Momorandum of Cooperation (MOC) on Fuel Ammonia and Carbon Recycling. Since then, further progress has been made among relevant entities, and we are pleased with the signing of JSA on fuel ammonia by ADNOC, INPEX, JERA and JOGMEC today. Japan hope that today’s conclusion of JSA will lead to further progress in concrete efforts to the supply of fuel ammonia from Abu Dhabi to Japan."

The JSA will provide a platform for ADNOC and its partners to explore supplying Japanese utility companies with blue ammonia produced in Abu Dhabi.

ADNOC is already embarking on a world-scale blue ammonia production facility at the TA’ZIZ Industrial Chemicals Zone in Ruwais which will have a capacity of 1,000 kilotons per annum, and further opportunities in blue ammonia will be explored under the new agreement.

Blue ammonia is made from nitrogen and "blue" hydrogen derived from natural gas feedstocks, with the carbon dioxide by-product from hydrogen production captured and stored. Ammonia can be used as a low-carbon fuel across a wide range of industrial applications, including transportation, power generation, and industries including steel, cement and fertiliser production.

In January, the UAE and Japan agreed to cooperate on fuel ammonia and carbon recycling technologies following the signing of a Memorandum of Cooperation between ADNOC and Japan’s METI. Both the UAE and Japan enjoy strong bilateral economic relations dating back to 1961 when the first shipment of UAE crude oil was exported from the Umm al-Shaif offshore field in Abu Dhabi to Japan.

ADNOC has a long history of mutually beneficial strategic partnerships with Japanese oil and gas companies that span over four decades and cover the entire oil and gas value chain, and these partnerships have strengthened in recent years.