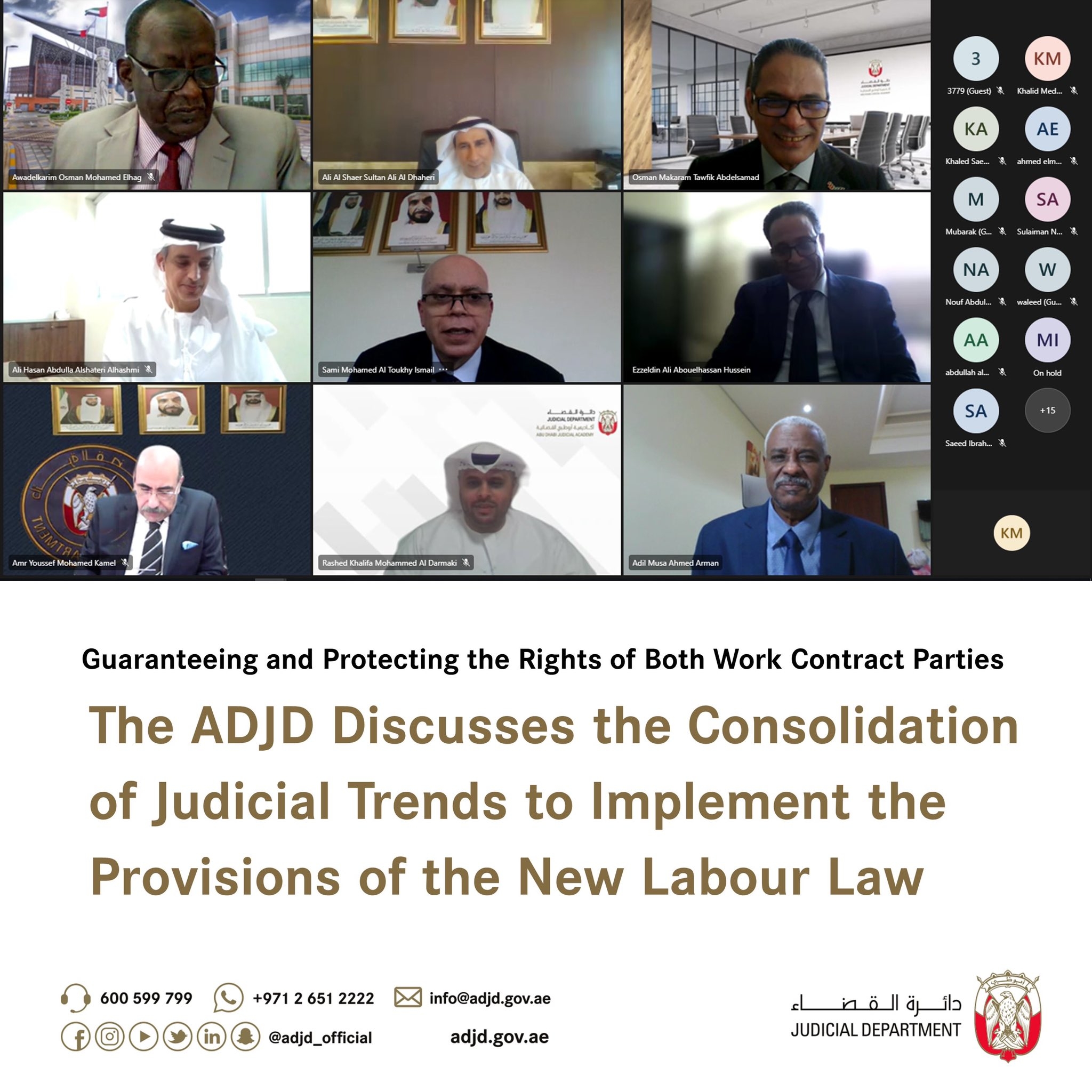 ABU DHABI, 12th June, 2022 (WAM) -- The Abu Dhabi Judicial Department (ADJD) has organised a discussion forum on the provisions of Federal Decree Law No. 33 of 2021 and its executive regulations.

The forum aimed at consolidating judicial trends and labour principles in dispute resolution, so as to enhance the efficiency, flexibility and sustainability of the labour market, while guaranteeing the rights of both parties to the contractual relationship and protecting them equally, in accordance with the provisions of the new law which came into force on 2nd February, 2022.

In his opening speech, Counsellor Ali Al Shaer Al Dhaheri, Director of the Judicial Inspection at the ADJD, explained that the discussion of the mechanism for applying the provisions of the new labour law to labour disputes aims to unify visions and adopt general principles that are likely to ensure the quality of judgements in labour cases, so that the decisions rendered by all courts and chambers on the same issues under discussion have been deliberated beforehand, in order to achieve the ADJD's strategic objective of delivering justice fairly.

Counsellor Al Dhaheri said that achieving the justice and ensuring the quality of court decisions is one of the ADJD's priorities, and aligns with the vision of H.H. Sheikh Mansour bin Zayed Al Nahyan, Deputy Prime Minister and Minister of Presidential Affairs and Chairman of the ADJD, to enshrine a pioneering and developed judicial system that keeps pace with all developments, in line with the ambition of the government of Abu Dhabi to achieve global leadership.

In detail, the forum, which was held remotely via videoconference, with the participation of several judges from the Court of Cassation and the Labour Court, dealt with the new provisions introduced by Federal Decree-Law No. 33 of 2021 on the regulation of labour relations, and Cabinet Resolution No. 1 of 2022 regarding the executive regulations of this Decree-Law, in order to unify the jurisprudence in terms of interpretation of the provisions of the abovementioned Law and its regulations, and to facilitate the proper application of these provisions, so as to achieve the desired objectives of strengthening the stability of the labour market in the country and protecting the rights of all parties.

The forum also considered a number of recommendations relating to the jurisdiction of the labour court, the scope of the law and the hearing of all labour claims, regardless of their source, whether these claims are decided under the provisions of the law or the employment contract within the prescribed time limit, with an explanation of the provisions of the non-competition clause and the concepts of basic and gross salary, compensation in lieu of notice, compensation for unfair dismissal and termination of the work relationship by force of law.