Reconstruction of Mosul Heritage and UAE’s Role: Triumph of hope and will over zealotry, exclusivism 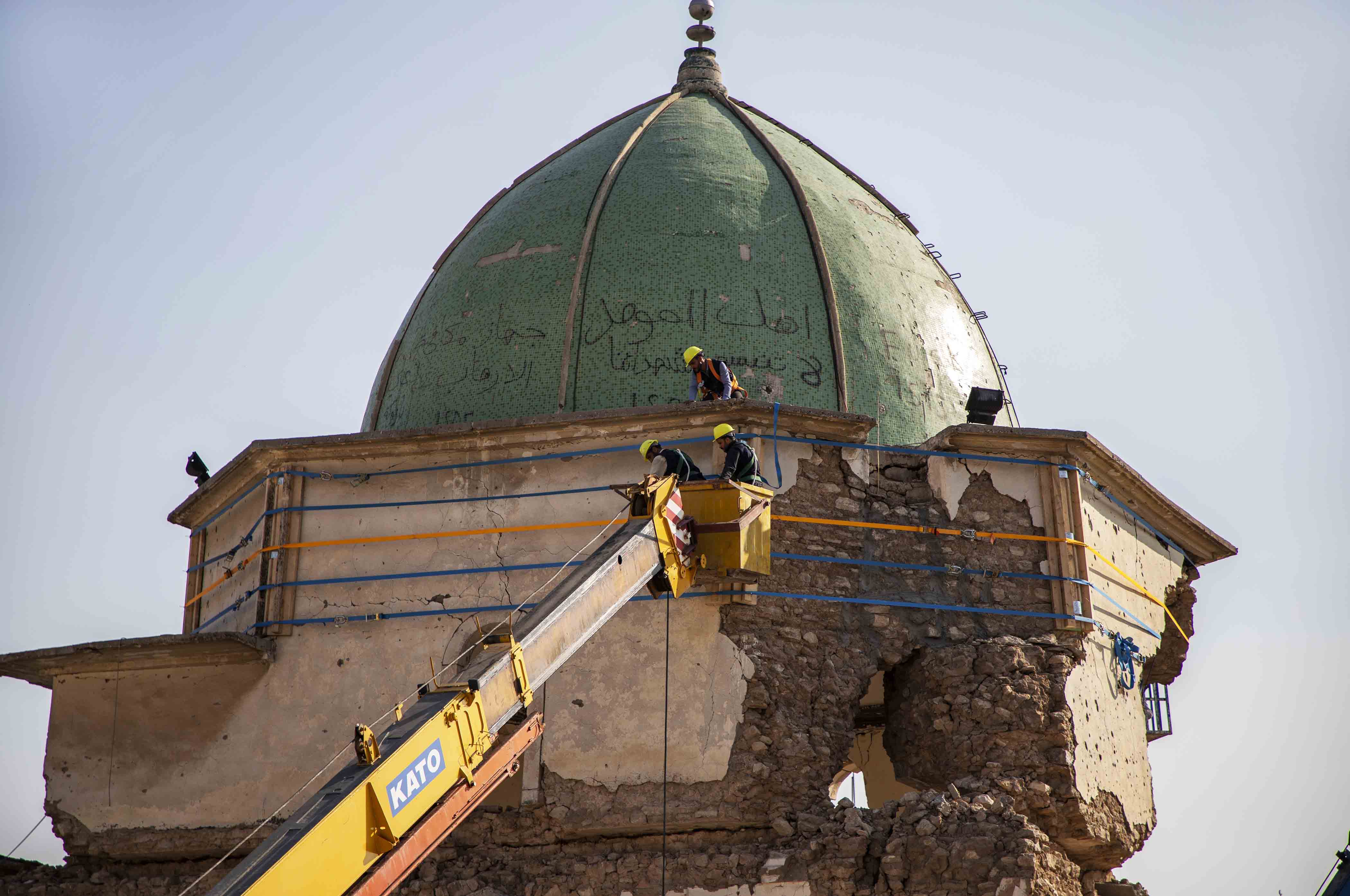 ABU DHABI, 25th November, 2022 (WAM) – "Revive the Spirit of Mosul" is an initiative launched in 2018 by the United Nations Educational, Scientific and Cultural Organisation (UNESCO). The UN body says that it was a "response for the recovery of one of Iraq's iconic cities”. Mosul endured a three-year-long occupation (2014-2017) by the self-proclaimed Islamic State (Daesh), ending with 80 percent of the Old City destroyed. UNESCO says that the heritage of the Old City “reflected the interchange of values of tolerance and co-existence through many centuries”.

The Iraqi historian Omar Mohammed, Research Fellow at George Washington University, known initially as the anonymous blogger 'Mosul Eye', who used to inform the world about life under the Islamic State, stresses that Mosul is a city where Jews, Christians, Yazidis and Muslims of different sects once lived together. "A city known for its unique diversity,” he adds.

UNESCO, which affirms that Mosul has been "a strategic location due to its crossroads and bridge between north and south, east and west" for millennia, claims that the diversity in the city made it a target for the Islamic State. Shattered by war, a project to rebuild the city had to take all of that into consideration.

Based on three pillars – heritage, cultural life and education, "Revive the Spirit of Mosul" has been financed by 15 partners. Among them, the United Arab Emirates, which has contributed with U$S 50 million, and the European Union.

Initially, the UAE’s contribution to the rebuilding of the cultural heritage of Mosul was about restoring and reconstructing landmarks, such as the Al-Nouri Mosque and its 45-metre Al-Hadba Minaret, built more than 800 years ago. However, a year later, the UAE and UNESCO renewed their collaboration to include support for the reconstruction of Al-Tahera Church, considered by UNESCO "an iconic symbol woven into the history of Mosul", and the Al-Saa Church, also known as Our Lady of the Hour Church, both built in the 19th century.

Upon signing the agreement, Noura bint Mohammed Al Kaabi, Minister of Culture and Youth of the UAE, said that "we are very honoured to sign this partnership with UNESCO and the people of Iraq to take our efforts further in helping rebuild Mosul and reviving the spirit of coexistence and social cohesion".

Years after the launch of the initiative, Paolo Fontani, UNESCO Director in Iraq, said in a conversation with Emirates News Agency (WAM) that "the dialogue is actually there; it is happening” in a city that has always been seen as a place symbolizing exchanges, different cultures and ethnicities living together.

"So that is the idea of reviving the spirit of Mosul. It is reviving the freedom of the people of Mosul and bringing back their identities by working together. It stresses that that the force of evil will not win and that culture will always remain part of our heritage", says Fontani, adding that the reconstruction could mean a "symbol of renaissance in Iraq" and the world.

The initiative, impacted by the COVID-19 pandemic, is moving towards the final stage. The head of UNESCO in Iraq reminds us that the reconstruction of Al Nouri Mosque, Al Habda Minaret, Al-Saa'a Church and Tahera is ongoing. It is at varied stages, depending on the gravity of the damage. Fontani believes that most monuments will be finished by the end of 2023.

The Al Habda Minaret shall take some extra months. "We are building using the same techniques, the same material, using ways of rebuilding that will maintain the value of what we are doing", he points out.

While the reconstruction of stones and walls takes place, society is on the way to rehabilitation, according to Omar Mohammed. The historian affirms that the recovery of Mosul is slow but moving forward. "The social fabric is recovering; it is in the process of re-developing or developing its narrative of coexistence. And in the future, the more we witness the recovery of the city's cultural heritage sites, the more we see the social fabric getting stronger," he declared.

Mohammed mentioned the visits in 2021 of Pope Francis and the French president, Emmanuel Macron, as important in the process of rehabilitation and expressed hope for a visit by the Minister of Culture of the UAE, Noura Al Kaabi, who, according to him, has a direct connection to Mosul and its recovery.

Years after the city's liberation in a battle that killed thousands, other signs confirm its rehabilitation. Paolo Fontani reminds us that the number of students enrolled at the University of Mosul has risen upon sharing a conversation with the head of the institution. "Listening to him telling me that the university before the war had 37,000 students, and now they have double that was reassuring. He told me the number of Christians or Yazidis are now in the thousands; before they were in double-digit. These diverse segments attending classes together itself is an affirmation of the revival of the harmonious spirit of Mosul," explained the head of UNESCO in Iraq.

"Revive the Spirit of Mosul" has had a multidimensional and tangible impact on the city of Mosul. The UNESCO representative to Iraq mentions that more than 1700 people were trained, and more than 3500 were employed as part of the initiative. "We are working on a specific area, in which you see things going back. We are not only doing monuments, but we are also doing houses. People are going back to live in the area. Some cultural organizations started to work in Mosul, particularly in the Old City. For sure, there is activity, including economic activity," adds Fontani.

That activity represents a change compared to the scenario Paolo faced upon arriving in Mosul in 2019. "The first time I arrived in Mosul, there was silence; it was probably the most incredible thing, it was the silence; there were no cars, no people, nobody. Everything was destroyed, and there was total silence," he states. "Now, over the years, when I go back to the western part of Mosul, the Old city of Mosul is full of people, full of traffic, maybe too much traffic already, but movement, open shops, markets open, Bazar open, people rebuilding," he says.

Fontani believes that the fact that a body like UNESCO was able to attract significant funding to invest in heritage and culture demonstrates that they can become a vital part of the development sector of a country. "In Europe or worldwide, culture sometimes represents 6% of employment, 3% of the GDP of countries, so we are showing that this can also happen in Iraq; that culture can and should become an engine for development and also it is very stable for development because people are working on their own heritage, on their own identity and this is really important", he states.

"The recovery of Mosul is not only important for the people of Mosul but to the rest of the world to show the importance of international mobilization when they come together and start contributing to the recovery of a post-war city. It shows how important this type of collaboration is, how important this type of cooperation is," stresses Omar. The historian hopes to see his city again becoming a cultural and economic centre, a space defined by coexistence and pluralism. "The revival of Mosul's heritage will reveal keys to humanity's resistance against violence and division. It will reveal that the only way to live together is by believing in diversity as a mosaic, where each distinct piece is integral to the revelation of the whole, where any missing piece will, in the end, drop all of their shared destiny", claims Mohammed.

The recovery of the social fabric of Mosul, a city whose name means "linking point" in Arabic, will take longer than reconstructing walls, mosques and churches. But as the director of UNESCO in Iraq reminds us, the dialogue is already present. And Fontani is also convinced of a bright future ahead.

Wrapping up his thoughts about the initiative, Paolo Fontani stresses the importance of the support of partners that embraced the idea. "I think it is very clear that all of this would not have happened without the great support of the UAE and other donors – a call for help that was well received, that also makes us proud and also, of course, we are aware of the responsibility we have delivered", he concludes.