Emirates sends off UAE fans on special A380 flight to Kuwait 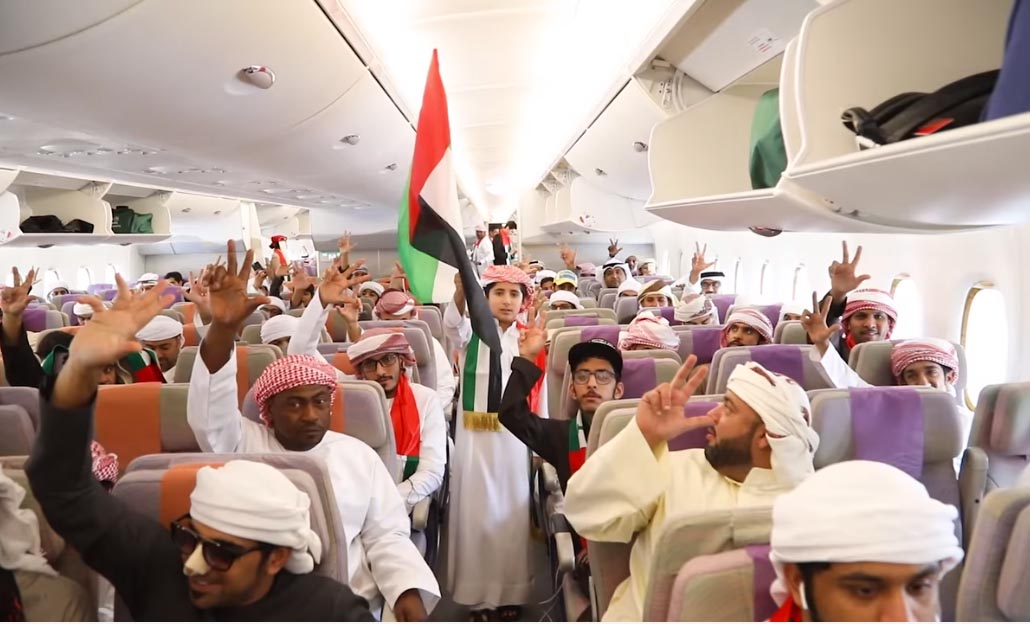 DUBAI, 5th January, 2018 (WAM) -- An Emirates’ special A380 flight to Kuwait took off earlier today carrying over 500 passionate fans to cheer on the UAE National team in their bid to clinch the Gulf Cup. Fans were treated to UAE flag scarves upon check-in to wear ahead of kick-off and show their support.

The Emirates A380, operating as EK 2555 and EK 2556, was fittingly emblazoned with the decal that makes a special tribute to late Sheikh Zayed bin Sultan Al Nahyan, in celebration of the ‘Year of Zayed’.

The flight was led by Captain Nabil Al Rustamani and First Officer Abdalla Mohamed, both UAE Nationals who greeted passengers with a special message, and wished the UAE National team the best of luck on the final match of the Gulf Cup.

Earlier this week, Emirates’ Chairman and Chief Executive, H.H. Sheikh Ahmed bin Saeed Al Maktoum, Chairman of Dubai Civil Aviation Authority and Chief Executive of Emirates Group announced that Emirates will operate a special A380 flight to Kuwait for UAE supporters to attend the finals of the Gulf Cup under the instruction of the Vice President, Prime Minister and Ruler of Dubai, His Highness Sheikh Mohammed bin Rashid Al Maktoum.

The 2017 Gulf Cup of Nations final is now witnessing a repeat of the 2007 final as the UAE are facing Oman to determine the winner of the 23rd edition of the competition. The results came after Oman defeated Bahrain 1-0, and the UAE beat Iraq on penalties after a 0-0 draw in both regular and extra time.

The match's first half, now running in Kuwait, ended all square.