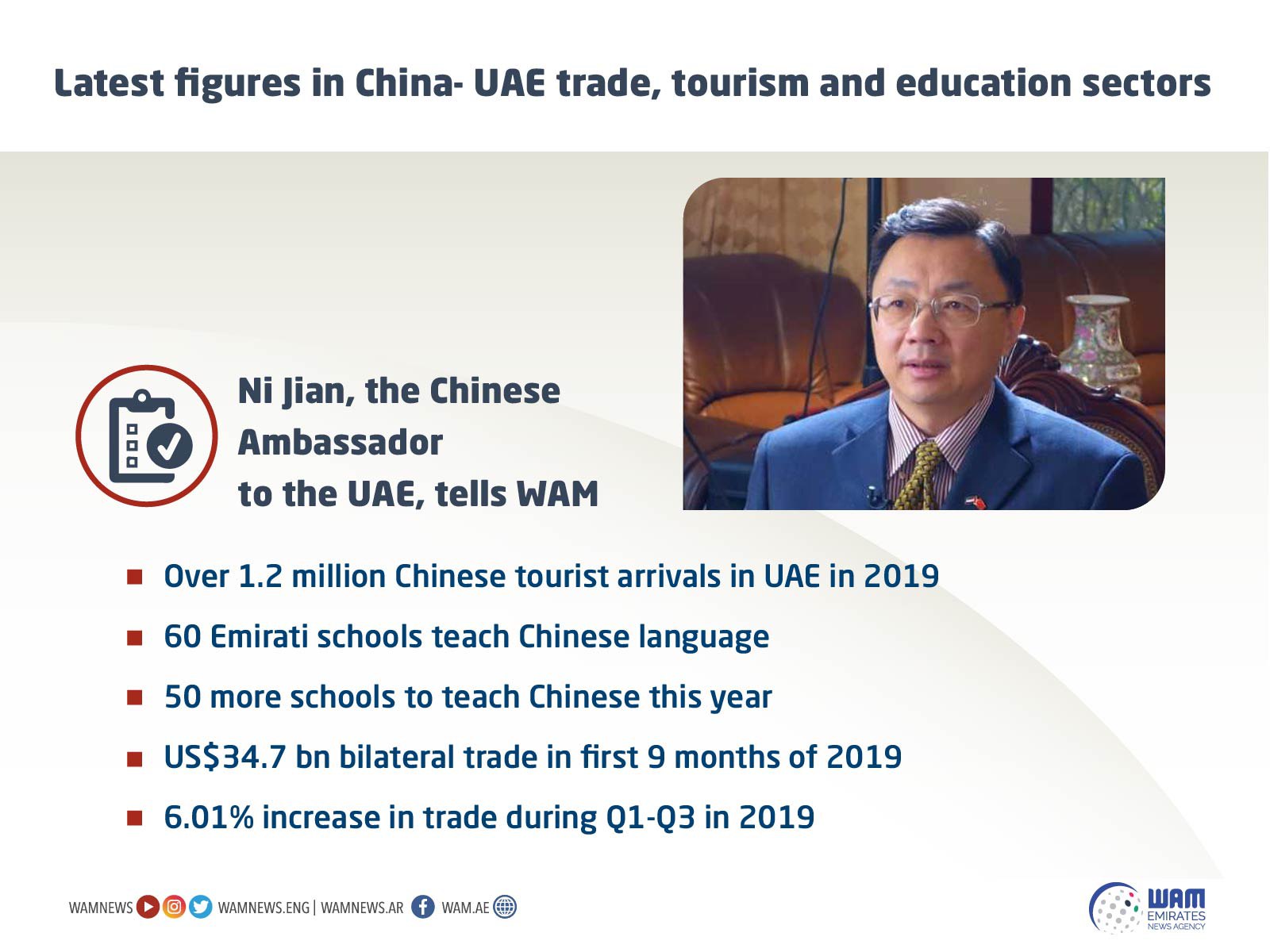 "In recent years, China and the UAE have maintained frequent high-level exchanges, and our cooperation in political, defence, economic, cultural, people-to-people and technological spheres has been elevated significantly across the board," he noted.

The slight decrease in value of imports from the UAE was due to lower oil price in 2019 than in 2018, the envoy explained, adding that as China and the UAE use different statistical methods for bilateral trade, the figures from both sides may differ.

In July 2019, WAM quoted Sultan bin Saeed Al Mansouri, Minister of Economy, as saying that China was the UAE’s leading trade partner in terms of non-oil commodities, accounting for 9.7 percent of its total non-oil trade in 2018, valued at over US$43 billion.

The Chinese Ambassador said that between January and September 2019, China’s overall direct investment in the UAE reached US$660 million, a year-on-year increase of 171 percent, which also accounted for 54 percent of China’s investment in all 22 members of the Arab League.

"China-UAE trade and investment are expected to maintain the momentum of rapid growth throughout 2020 and beyond," he affirmed.

Chinese companies in the UAE have been growing leaps and bounds, especially at a time when the bilateral relations are thriving and the UAE has become an important partner in the ‘Belt and Road’ cooperation, the ambassador noted.

Of between 4,000 and 6,000 Chinese companies in the UAE, most of them are based in Dubai. Many large Chinese corporations have also stepped up their interest and participation in the UAE market, the diplomat said.

Jian highlighted the importance of the visit His Highness Sheikh Mohamed bin Zayed Al Nahyan, Crown Prince of Abu Dhabi and Deputy Supreme Commander of the UAE Armed Forces, to China in July 2019, noting that it achieved fruitful outcomes and further consolidated the political and strategic mutual trust between two countries.

"Chinese companies signed the contracts to undertake the design and construction of Etihad Rail [Stage 2], which is the highlight of our bilateral practical cooperation in 2019," he affirmed.

An estimate of over 1.2 million Chinese tourist arrivals in the UAE in 2019 shows the thriving cultural and people-to-people exchanges between both countries, Jian pointed out.

"With the Expo 2020 Dubai to be hosted later this year, the UAE is expected to attract more Chinese visitors and add more vigour to our cultural exchange," he affirmed.

The UAE hosts the largest number of Chinese businesspeople, workers and tourists in the Middle East – estimated at over 200,000 – and most of them live in Dubai and Sharjah, the envoy noted.

The interest in Chinese language is rising in the UAE with the initiative of H.H. Sheikh Mohamed bin Zayed Al Nahyan to teach Chinese in 200 UAE schools, he said.

Now there are over 200 educators teaching the Chinese language in more than 60 Emirati schools, and 50 more schools are scheduled to teach Chinese by September this year, Jian revealed.

Many Chinese art groups come to perform in the UAE. "Our plan to open a Chinese Cultural Centre in Abu Dhabi is also in progress," the diplomat revealed.